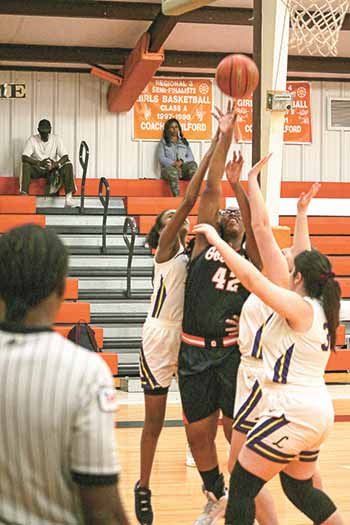 Goodrich began the game on a 16-0 run and the contest would never be close.

The coach agreed that her team looked well in Friday’s performance, but still feels her young students have a lot of growing to do.

“We’re still having a hard time trying to keep up in man-to-man,” Goodrich coach Pinellafie Johnson said. “We need to stay between them and the basket. We get on them, but forget where the ball is. We also have to work on running our zone offense. We had opportunities to run it today, but they did it maybe three times. I told him that we have to learn to run the zone offense, because once we get into district and the further you go, it is going to get tougher. You have to know how to run it. I was pleased with the effort and they did a good job.”

Latrina Morgan was the high point with 24, Breya Passmore had 15 points and Aralyn Angel had 14. Marisa Olivares and Arly Balbuena each added a bucket.

The night before, Goodrich dropped a 40-30 contest to Spurger. A Lady Hornet fouled out and there were continuing problems maintaining a man-to-man defense, according to Johnson. The Lady Pirates were able to secure the win in the final period, outscoring the Lady Hornets 18-6 in that time.