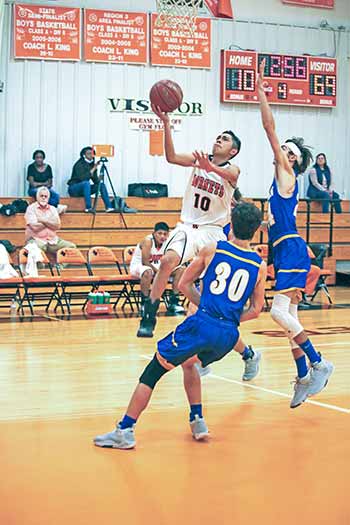 Tournament hosts Goodrich fell in the opening round of their tournament 77-12 to the Hardin Hornets in a contest that was never close.

The visiting Hornets took a 19-1 lead in the first quarter and never looked back. Hardin led 37-3 at the half.

“It got a little better in the second half; we’re still trying to get there,” Goodrich coach Lester King said of his young group. “The kids our freshman and still getting in shape and this is new to them. They’ve never played any varsity basketball. We’re getting better every time we play. We’re playing good competition. We have played Hardin and Shepherd, Colmesneil and Onalaska. By the time we get into district none of them (schools much larger in size) are going to be there.”

Going through the growing pains combined with playing the larger schools, like Class 3A Hardin, will serve Goodrich well once they reach district play. A better effort in the second half showed plenty of fight in the team.

“We are just trying to get there. They were better in the second half at getting to the rim. It was one of those deer in headlights look, like they were scared to go to the rim. I want them to see if their man can guard them. If they can, maybe they will back off and you can get a shot. But, we are getting experience.”