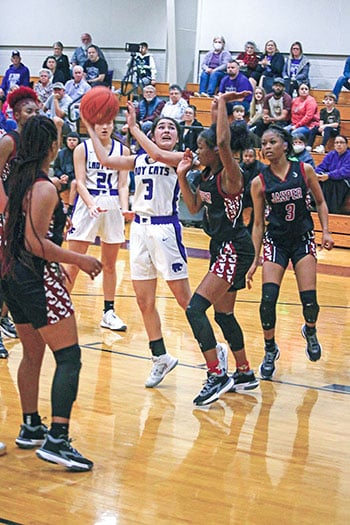 Alexis Thompson finds an opening for the shot.By Brian Besch

The Big Sandy girls came from behind in the second half to gain an opening-round 40-36 win over Jasper in their tournament Thursday.

“They looked pretty good,” Big Sandy coach Ryan Alec said of Jasper. “They're very athletic and very quick. We’ve set this tournament up to where we are able to see teams like that. We want to play against teams that do that to us. Hopefully, if we get into district and into the playoffs, we're probably going to see some of that. They are a very good team and I was proud of our kids.”

Having a bit of trouble in the half-court offense, the Lady Cats utilized improved shooting in the third and fourth quarters to overcome an 18-14 deficit at the half. They had fallen behind with a poor performance at the free throw line, going 1-for-6 in the second quarter alone. For the game, Big Sandy carried a 40 percent success rate at the charity stripe.

However, the game was put out of reach by shooting free throws when Savanna Poncho sank a couple with five seconds remaining. She would also be the game’s leading scorer with 18 points. Alexis Thompson added a dozen, while Briana Miles, Faith Geller, Corynn Kaleh and Lauren Hulin also contributed.

“We moved the ball like we are supposed to. I think a few times, turnovers hurt us a little bit and our inability to make some free throws down the stretch,” Alec said. “Overall, we got down and we bounced back in, so there was a lot of factors in the game where we gave them chances to pull it out. We fought back into it and grinded and won the game. it is hard for us, because we can't match up with their athleticism at times. We have to be able to move the ball. We have to take care of the basketball with our guards up front and be able to see the floor. I thought our guards did a really good job of finding open people underneath the basket. It is a testament of them being able to see the floor well.”