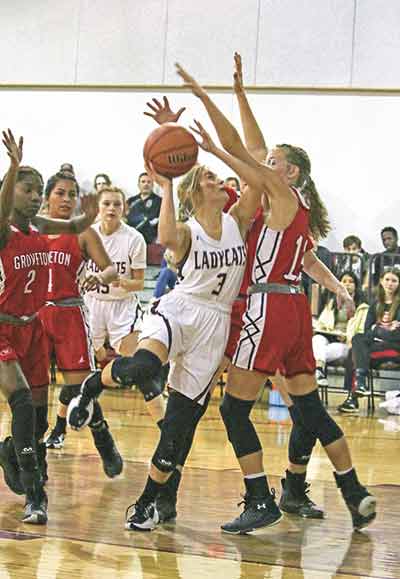 Alora Pinkert turns for a jumper in the lane.By Brian Besch

The game was in doubt until the end, but the Lady Wildcats of Onalaska pulled out a 42-41 win Tuesday over the Groveton Lady Indians.

The Onalaska press provided plenty of points for the home team, but Groveton found a way to remain in it until the final buzzer.

“Coach (Rogelyn) Andrews does a great job at Groveton,” Onalaska coach Ashley Sustaita said. “She has been there since I have been here in Onalaska and those kids work hard for her. The post is a good kid and she will compete at the 2A level for sure. It is always fun to play them, and they do a really good job hustling and moving the ball and outworking us sometimes.”

The Lady Indians had two players with 13 points each, but Onalaska had an answer with Kylie Sisk, who had 25 points and was perfect from the free throw line in nine attempts.

In the last possession, Groveton was down three and could not find an open shot. They worked the ball into the post, but could not get a jumper to go down until the last second.

“We are 4-3 right now and we have played Jasper and Big Sandy, who are both really good programs,” Sustaita said. “We’ve got a lot to figure out internally. We work on the basics and fundamentals every day and we do a lot of the little things right. We are very undersized this year, so we are figuring out stuff like blocking out. We still have to figure out the offensive side a little bit. We tend to struggle knowing what to do with the ball in easy situations, so it is just breaking down the game of basketball for them as much as we can.”

Alora Pinkert added nine points for the Lady ‘Cats, while Kenadi Houser had a bucket and Mary Joy Cariaga hit a free throw.

The coach said she likes what she sees in the hustle of her team and the press is creating offense for now.

“We’ve got some speed and we have been adjusting to different press breaks that we are seeing. For the most part, we do a decent job and they listen for who to cover and where to cover. We do get a lot of turnovers, but we have to make sure that we execute when we get those turnovers and not turn it over again.”

Onalaska will travel to Cushing for a game Tuesday before returning home the next week to host New Waverly.