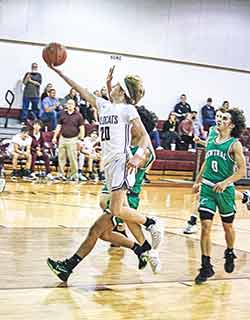 Onalaska had a lead early in the game, holding the Bulldogs to eight points in both the first and second quarters. However, the Wildcats’ 13-8 lead after a quarter evaporated when they were held to three points in the second period.

“They are a good ball club and they play a unique defense in the point zone, which not many teams around here run,” Tyerman said of Central.

“It is a new thing to where we have to make sure we take care of the ball. We just made some mistakes and had some turnovers in the second half that we can’t have. It is something that we can control and something we will work on to try to get ready for the next game.”

Those turnovers would prove to be costly, as each possession in the second half was valuable. Both teams scored at a higher rate after making a few halftime adjustments. With the game tied after three periods, it was a 19-point fourth quarter that lifted the Bulldogs to victory.

One player led the way for each school, with Travis Murray pouring in 27 points for Central to top all and Redden scoring 20 for the ‘Cats.

“I tell the kids all the time that it comes down to rebounding and turnovers,” Tyerman said. “We have to take care of those roles and responsibilities in order to make sure we keep ourselves in a position to win. It is stuff that we have to do a better job of, which we will.

We work on it in practice and it is part of that inexperience with the young kids that haven’t played too many varsity games. That takes time for them, but they will get used to the speed of it.”

Other Wildcats contributing on the scoreboard was Bryan Wyatt with eight points and John Byrd with six. Lucas Jackson, Brady Smith and

Gauge Moseley each hit a 3-pointer, showing off the shooting depth of the team.

“They are putting in the time and it shows and pays off for them,” the coach said of his shooters. “They put up a ton of shots in the summer and all season. It is something that we take pride in and it is part of the way the game is officiated now. You don’t get too many calls when you drive in when you are smaller, so you have to take what they are going to give us.”

The Wildcats will next travel to Corrigan-Camden Tuesday, then enter tournament play two days later.