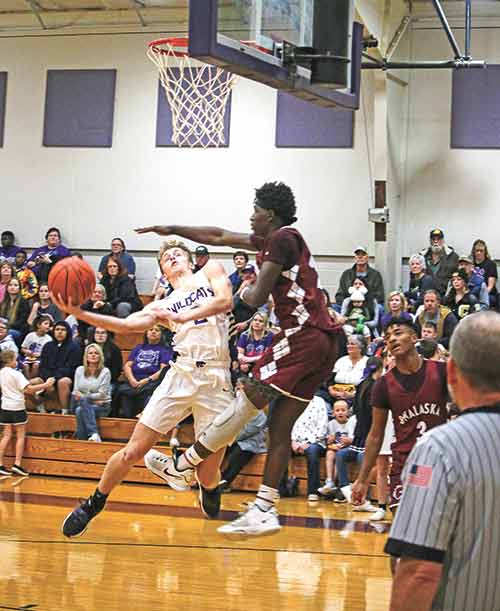 Big Sandy was able to pick up a home win Friday with defense leading the way, taking a 55-34 decision over Onalaska.

Onalaska had been impressive on offense coming into the game, averaging 72 points in two wins to start the season. However, the Big Sandy defense that was smothering throughout last season’s playoff run was up to the challenge.

“In the first half, you saw how we tried to play a little slower because we know how great their defense is as a team,” Onalaska coach Nick Tyerman said. “They play amazing team defense; I saw it on film. I knew it was going to be extremely tough to go against, so we were trying to slow the pace down to try to get them to extend a little bit. You are going to have games like that, but you can’t start out that slow. They do such a good job of taking things away that you have to pick and choose your moments. It makes it really hard when you let them get some kind of double-digit lead, because then you have to start picking up the tempo to try to get something.”

The visiting Wildcats were able to knock down just three shots in the first half, limited to seven points through 16 minutes of play. The score at the break was 22-7 in favor of the home team.

“The first half, I thought our defense was outstanding,” Big Sandy coach Kevin Foster said. “In the second half, I thought we lost our focus and intensity a little bit. That, and Onalaska stepped up their’s. They started pressing us, and we got a little careless and lazy with the ball. They started making some shots and we knew they could shoot the ball coming in. Our goal was not to give any of them open looks. We gave them way too many and they made some of them in the second half.”

That second half had a much different look, as both schools picked up the pace in more of a fast-break game. Onalaska more than doubled their first-half output in just one quarter, picking up 16 points.

Lucas Jackson had a couple of baskets and Brady Smith scored seven in the period. Big Sandy nearly kept pace and led 36-23 with the game still in doubt heading into the final quarter.

“That is what I love about these kids. They want to play hard and they want to do their best. It is a great group to coach. It is super early and this will help us get ready for district, which is what it is all about. When we had some shots not fall, we had to make some adjustments and try to speed it up in the second half,” Tyerman said. “I like the physicality that we had in the second half, but again, we just have to be able to make shots. I am proud of the kids. We scrapped and we fought, and it is a good game experience for us. We have to get ready, because we have the No. 4-ranked 2A team in the state on Monday, Douglass, at home. Then, we have Central on Tuesday to help us get better experience.”

Big Sandy saved its best for last, adding on 19 points in the fourth.

Adrian Thompson had 10 points and four others contributed a bucket.

For the game, Thompson led all scores with 19, while Javen Criswellhad nine, Jorden Martinez had eight and Seth Beene-Williams six.

Onalaska was topped by Smith with 13, Jackson had seven and Kevin Redden added five.

“Early in the season, we haven’t been shooting the ball like we’re capable of. We had a lot of clean looks tonight, but we just couldn’t hardly buy any,” Foster said. “We just haven’t quite hit that stride yet. From an offensive standpoint, I thought we executed OK, but I felt like we left a lot of pints on the floor. I think we have a chance to be good. Starting out, we haven’t really been all together yet. I have a couple of kids that are out.”

Both schools are now 2-1 on the season, with Big Sandy also defeating Warren and dropping a game to Orangefield. Onalaska has beaten Goodrich and Spurger.

The next few games for Big Sandy will also be challenging, traveling to Splendora Monday and returning home Tuesday for a tip with Bridge City.