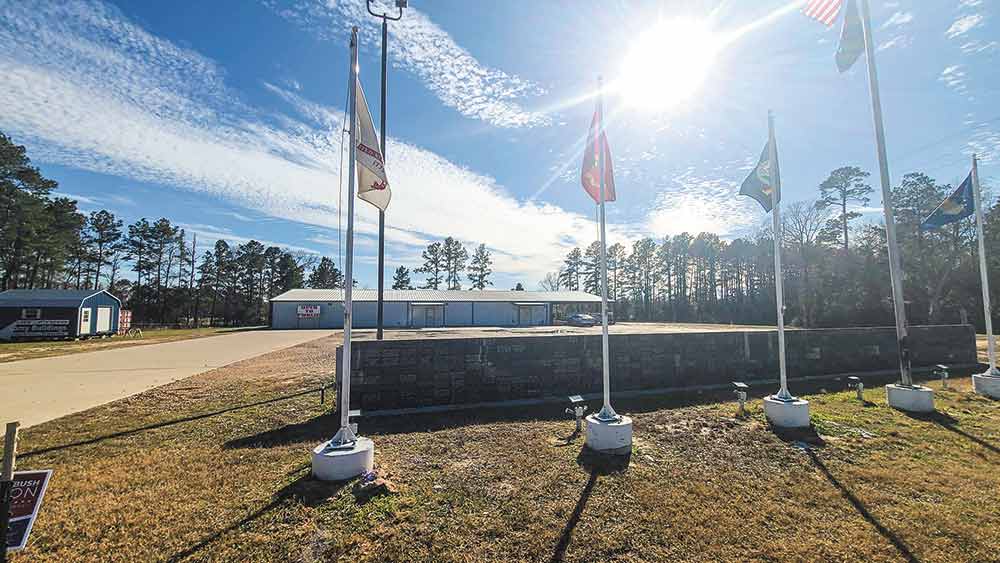 The VFW Post 8568 of Livingston was suspended due to violations of the laws and usage of the organization, specifically, the failure to have all required elected and appointed positions filled. Photo by Brian Besch

State Commander Norman J. Macey suspended the operations of VFW Post 8568 of Livingston—effective Feb. 15, for a period of up to 90 days—due to violations of the laws and usage of the organization, specifically, the failure to have all required elected and appointed positions filled.

In conjunction with the suspension, Macey assigned an administrative committee to supervise and assist the post. The committee comprises Immediate Past State Commander Richard “Dick” Shawver who will serve as chairperson, District 19 Commander Joel Pipes and District 19 Trustee Max C. Montgomery.

The next regular meeting of the post is 6 p.m. Monday at the post home located at 4951 U.S. Hwy. 190 West in Livingston and members are urged to attend.

“If a quorum of five members is established, an election will be held to fill all post officer vacancies and a discussion will be held on what VFW Post 8568 must do to rectify any problems. If a quorum is not met, I will have no choice but to recommend to the VFW National Commander in Chief that the charter of VFW Post 8568 be cancelled in accordance with Section 212 of the National Bylaws and Manual of Procedure,” Macey said in a letter mailed to all 217 members of the post. “If you want to save your post, then again, I urge you to attend this meeting.”

According to Macey, the administrative committee will supervise all activities of the post and ensure full compliance with all applicable bylaws, rules and regulations of the organization. During the suspension period, the chairperson shall submit monthly reports to Macey setting forth, in detail, the actions instituted, and the steps taken toward the resolution of the listed violations and other violations that may be identified. The final report shall contain the committee’s recommendation as to whether the suspension shall be rescinded or continued, or if the post charter be revoked.

While under suspension, no meetings shall be held in the name of the post, except for the sole purpose of the discussion of the causes, effect or removal of the penalties, Macey said.

He further stated that the chairperson shall take the necessary steps to secure all records and property of the post and that the post canteen shall immediately be closed for business.

Early voting will continue to be available from 7 a.m. to 7 p.m. this week and next. Photos by Brian Besch

Early voting began at 7 a.m. Monday for the March 1 Texas Primary Elections and as of 6:30 p.m. Tuesday, 805 ballots had been cast—545 at the Polk County Judicial Center, 203 at the Onalaska Sub-Courthouse and 57 at the Sechrest Webster Community Center in Corrigan.

Early voting will continue to be available from 7 a.m. to 7 p.m. this week and next at all three locations—the Polk County Judicial Center, the Onalaska Sub-Courthouse and the Sechrest Webster Community Center in Corrigan.

However, all locations will be closed on Feb. 21, the federal holiday in which Presidents Day is observed.

With Polk County having been redistricted into the 8th Congressional District, voters will elect someone for U.S. representative.

Locally, the following seats will be on the ballot:

District Clerk Bobbye Christopher who has filed for reelection.

County Clerk Schelana Myers Hock who has filed for reelection.

County Judge Sydney Brown Murphy who has filed for reelection.

County Treasurer Terri L. Williams who has filed for reelection. Louis Ploth Jr. has also filed for this position.

Precinct 2 Commissioner Ronnie Vincent who has filed for reelection. Mark Dubose has also filed for this position.

Precinct 4 Commissioner Tommy Overstreet who is retiring and not seeking reelection. Justin Cude, Jerry Cassity and Jason Richardson have filed for the position.

County Court at Law Judge Tom Brown who has filed for reelection.

Precinct 1 Justice of the Peace Darrell G. Longino who is retiring and not seeking reelection. Terri Lynne Mayer and John Cabiness have filed for the position.

Precinct 2 Justice of the Peace Sarah Rasberry who has filed for reelection.

Precinct 3 Justice of Peace Robert “Dooley” Johnson who has filed for reelection.

Precinct 4 Justice of the Peace Jaime Richardson who has filed for reelection.

A discretionary exemption to the Polk County Subdivision Regulations for a 6.258-acre tract, I&GN RR Section 62 Abstract 650, located in Precinct 4, will be discussed and considered for approval by the Polk County Commissioners Court during its regular meeting at 10 a.m. Friday. Due to the Court’s attendance at the V.G. Young Institute of County Government School for Commissioners Courts in Bryan next week, its Feb. 22 meeting was rescheduled for Friday.

In personnel matters, the Court will review and consider personnel action form requests submitted since the last meeting and will review any authorized emergency hirings. They will also discuss and consider action regarding a sheriff’s request for a temporary pay increase for staff at the Polk County Jail.

• Approval of the minutes of the Feb. 8 meeting;

• Approval of the schedule of bills;

• Approval of an amendment to the contract between Tyler Technologies and the district clerk;

• Approval of a request from Precinct 1 Constable Scott Hughes for an asset forfeiture expenditure of seized property not to exceed $763.52 for reimbursement to Beau Price for the purchase of supplies; and

• Approval of an interlocal agreement between Polk County and the City of Livingston for the county’s provision of election equipment and services for the May 7 election as recommended by the county clerk. 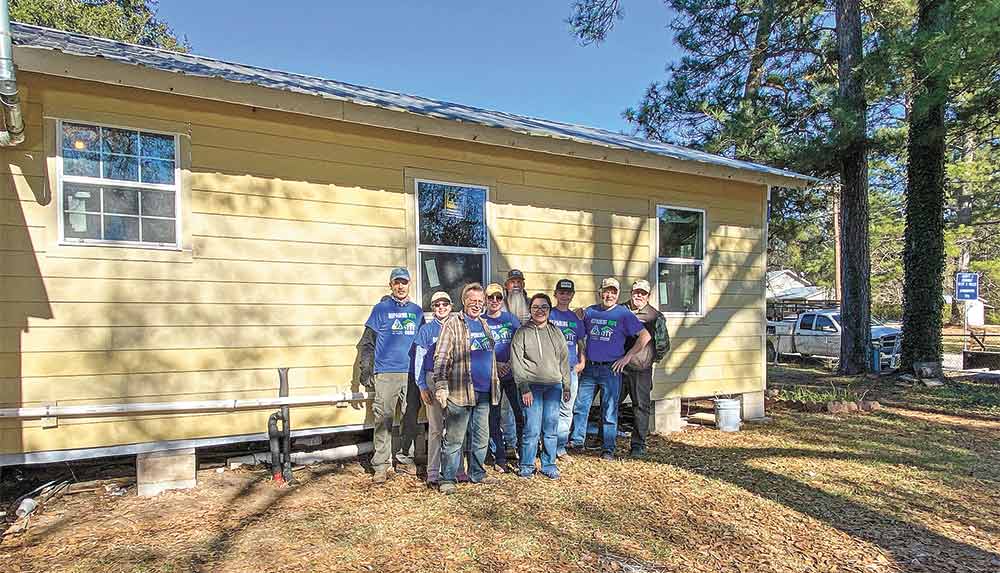 Center of Hope and Habitat for Humanity of Polk County joined forces recently to help a young family in Livingston. The repair is the second project completed by the two local organizations under a new partnership.

A single mother and her two children were struggling to endure winter weather in their unfinished home. The home’s exterior was unfinished, leaving the young family susceptible to freezing temperatures. The mother reached out to Habitat for Humanity of Polk County for help.

“We see a lot of single parents who struggle just to provide basic necessities for their families. Home repairs are just too costly for many and that’s where Center of Hope and Habitat can help,” Amy Borel, Habitat for Humanity of Polk County’s executive director, said.

The two organizations came together with a team of 10 volunteers to install insulation, new windows and exterior siding. The inside of the home also received some sheetrock, insulation, a sink in the only bathroom and other small repairs. The volunteers completed the project in one day and endured the cold weather themselves as they worked diligently on the exterior.

“The temperature in the house greatly improved once we finished the exterior work. I think all the volunteers felt really good knowing the family now has a warm home to live in,” Borel said.

“God continues to bless our community and this partnership with Habitat is just another example,” Gloria Barber, Center of Hope’s operations director, said. “We encourage our Polk County neighbors with home repair needs to call us. We urge folks to understand that with limited resources, we have to prioritize those families in greatest need.”

Residents in Polk County in need of critical home repairs can contact Center of Hope at (936) 327-7634 to request an application. Applicants are selected based on need, volunteer team capabilities and available funds.

Center of Hope is a 501(C)3 non-profit organization supported by 14 area churches whose mission is to provide food, cancer support services, disaster relief support and counsel and refer services to those in need in Polk County. They also offer a smile, friendship and prayer for families in need.

Both organizations are funded through local donations and volunteer efforts. To volunteer or donate visit www.habitatpolkcounty.org/volunteer or call Habitat at (936) 337-0502 or Center of Hope at (936) 327-7634. 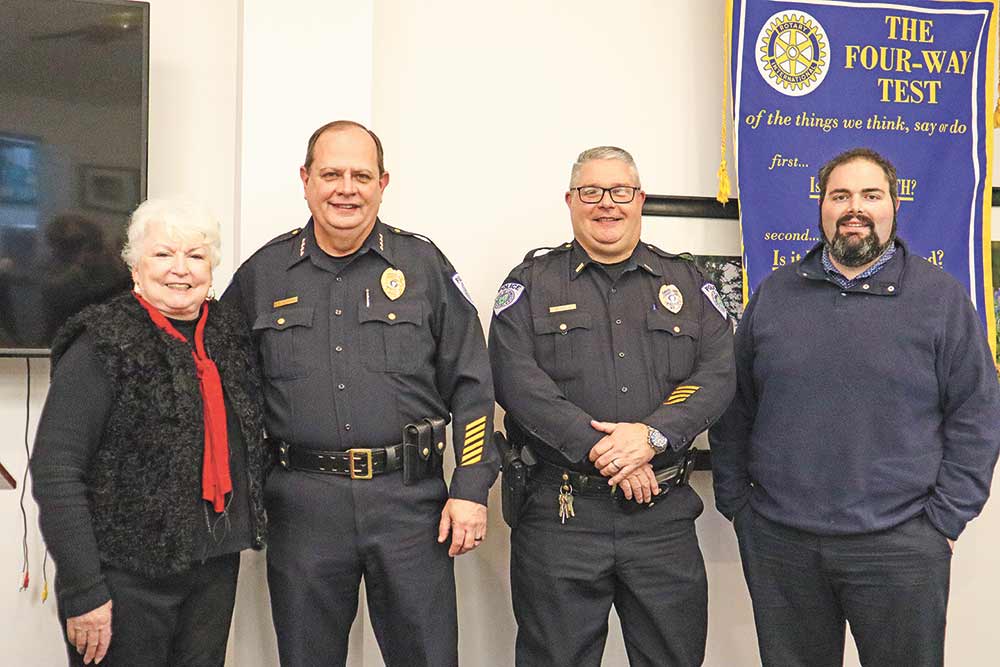 Parrish started by asking how many had seen on social media that Livingston is ranked the sixth worst place to live due to the crime rate. He explained that it is not factual at all but is contrived by companies that sell security alarm systems. He said they get the population of a town and then look for the number of crimes in that zip code.

“If you want to see the crime numbers for Livingston you can go to texasdps.com and look at the uniform crime report,” Parrish said.

Drake agreed. “Numbers–it’s however you want to twist it and skew it.

“We have an animal control officer, an evidence technician and a police chaplain from the military who has a degree in theology. His name’s Britton Shoellhorn and he’s a volunteer,” Drake said.

“A lot of things have changed since I started policing. Over the years technology has sky-rocketed. We’ve always kept up but we really upped our game technology-wise in the last year,” Drake said.

He said the department got a TTY machine which is text to talk for the hearing impaired. He said they’ve also added a language line with six different languages. He also talked about Rapid SOS, a program through which someone may dial 911 and the department can see where the call is coming from and track the individual. However, you have to dial 911 first, he emphasized. “If you’re in the city limits it would ping and we could find you,” he said, adding that it’s already helped them locate some people who became disoriented and got lost.

Drake also spoke about the homeless, informing the Rotarians that not all of those purporting to be homeless really are. He mentioned the woman that sits in front of McDonald’s and others at HEB and Lowe’s who actually have places to live.

“We patrol thoroughly for the homeless, give out pamphlets and try to find them help,” he said, adding that the department also has a program called Life Size which is a mental health evaluation.

Drake and Parrish also addressed an annual event in which their department participates and looks forward to. It’s called “Shop with a Cop.” They said the local Walmart raises money, along with some private donors, and the schools are consulted to determine which students should participate.

“The officers look forward to it every year,” Parrish said.

“Walmart raised $6,000 and we had 60 kids this past year and each one was given $100 to spend on anything they wanted,” Drake said. “We’d pair up and go through there and you’d have a kid that wanted to get a pair of socks for their dad or a cooking pan for their mom. One kid wanted a Christmas tree because their family didn’t have one.”

Both officers emphasized that this is a local program and not a corporate one and that Jonathan Montalvo, manager of the local Walmart, goes above and beyond to help this community.

“He stands there with his credit card as we check out and if it goes over $100, he swipes his card to make up the difference,” Drake said.

Parrish also talked about the fundraiser the department holds every year benefiting the Caran Coward scholarship, named for a former officer killed in the line of duty.

“Just last year we gave out seven scholarships for $2,000 apiece,” he said, emphasizing that it is the only fundraiser the Livingston Police Department does.