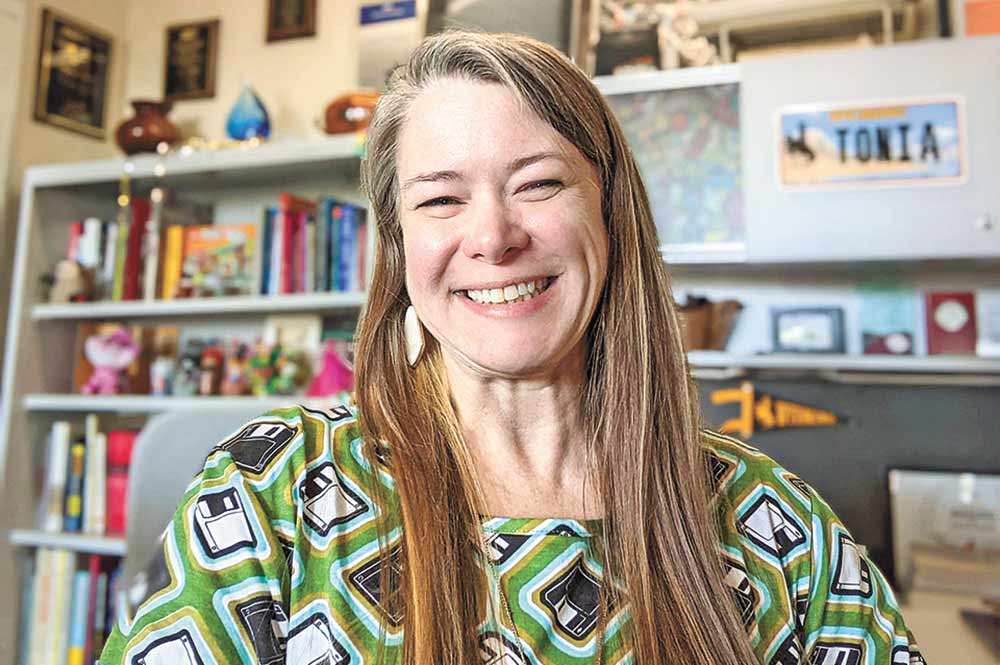 Dr. Tonia Dousay has been selected as the new director for the University of Alaska Anchorage (UAA) School of Education (SoE). Dousay previously served as the associate dean of assessment and accreditation for the University of Idaho’s College of Education, Health and Human Sciences. Dousay is a 1994 graduate of Livingston High School and the daughter of Roger and Ruth Dousay.

Dousay earned bachelor of science and master of science degrees in agricultural education from Texas A&M University. She received her Ph.D. in learning, design and technology from the University of Georgia in 2013. She began her academic career as an assistant professor at the University of Wyoming. Prior to her career in higher education, Dousay was an instructional designer and eLearning manager for the Texas A&M Engineering Extension Service.

Dousay’s work in higher education focuses on empowering learners and fostering interdisciplinary collaborations. Under the Obama Administration, she contributed to the White House Office of Science and Technology Policy Maker Education Initiative (Maker Ed). She received the International Society for Technology in Education (ISTE) Award for Advocacy in 2016 due to her work with makerspace education. During the COVID pandemic, Dousay and her research team acted swiftly to design and implement virtual field camps using Minecraft and industry software to facilitate on-time graduation for geology majors from four different universities.

“I have dedicated my career to serving public education, supporting teacher preparation and quality learning design. It is an honor to continue this mission and serve the state of Alaska in this capacity,” Dousay said. “I am excited to hear and amplify the stories of innovative practice and help the UAA SoE expand their program offerings within and beyond initial and advanced K-12 teacher licensure.”

University of Alaska System President Pat Pitney referred to Dousay’s hire on Twitter as “Major momentum for our schools of education.”

Changes to the personnel management system regarding retiree health benefits, the merit pool and longevity were made by the Polk County Commissioners Court during its regular meeting Tuesday.

Regarding the retiree health benefits, if a retiree returns to the employ of the county, they are subject to a cap on their health insurance. The Court approved removing the cap.

“Basically, the current policy is not working the way it was meant to,” County Judge Sydney Murphy said regarding the merit pool.

The recommendation from the committee that was appointed to study it is to revise the longevity policy by taking longevity and merit pay and putting them together as a line item. The longevity pay would be awarded annually based on the employment date. The merit pay would basically be discretionary raises, that if not given would roll over to the next year.

Several residents from the Midway Loop attended Tuesday’s meeting, with two addressing the Court during the public forum. Their concerns were that when they voted in the March Primary Election they voted they were able to vote in the race for Precinct 4 commissioner, but when it came time to vote in the May runoff election for Precinct 4 commissioner were unable to and were told they were in Precinct 3. Some were allowed to vote provisionally, but others were not given that opportunity.

Precinct boundary lines were changed last fall in conjunction with new population numbers based on the 2020 Census.

“We try to find an equitable distribution. The federal government requires us to follow the federal Census blocks. We did hire someone to come in and do it. The Court tried as much as possible to be conscious of as little disruption as possible,” Murphy said, adding that with regard to voting, she asked County Tax Assessor-Collector Leslie Jones Burks, the county’s voter registrar, to attend Tuesday’s meeting.

“Honestly, I can’t speak for anything that happened 10 years ago. When we did this census, I got an Excel spreadsheet and went road by road, making sure everyone was in the right school district and the right municipal utility district,” Burks said.

Several members of the Court, as well as the audience, expressed concern regarding people being able to vote in the primary but not in the runoff. One referred to it as “unintentional election-tampering” and others questioned the legality of it.

Murphy asked Burks to call the Secretary of State’s Office for some clarification and to let her office know when she found out something.

A budget workshop was on the agenda at which time the Court received an informational report from James Gilley with U.S. Capital Advisors and discussed options for the issuance of debt to fund all or a portion of the courthouse restoration project. Murphy said the original projection was $10 million but the projection now is $12,921,000 and the Texas Historical Commission is giving the maximum it can give which is $5 million.

“We came up with three scenarios, somewhat arbitrarily,” Gilley said, presenting the scenarios.

“If you look at 2023, this is where the judicial center falls off. Keep in mind those would be tax notes so they would be seven years,” Murphy said.

“We’ve got a pretty healthy fund balance. I think we should at least pay some of it,” Precinct 3 Commissioner Milt Purvis said.

“The interest rate is already trending up. We could lock it in at 3.75%. If interest rates go up to 8%, we’re in good shape,” Murphy said.

“What I’m seeing is it’s going to go up every time the feds meet,” County Treasurer Terri Williams said.

“I’m not averse if the Court wants to borrow the whole amount,” Murphy said. “Do you want to move forward with tax notes and if so, how much?”

Purvis moved going forward with the second scenario and Overstreet seconded, with the Court approving the decision.

Although the Court was slated to discuss and consider changes to the distribution of the road and bridge portion of the tax rate in conformance with the revised precinct boundaries, action on the item was tabled.

The Court considered acceptance of proposed funding to the county per the Deep East Texas Council of Governments (DETCOG) method of distribution for the Regional Mitigation Program, part of the State of Texas Community Development Block Grant Mitigation Action Plan. Polk is one of seven DETCOG counties that qualified at both the state and national level. The total allocation is approximately $161 million with Polk County’s portion being approximately $17 million.

Action regarding Request For Proposal 2022 – prepositioned contracts for emergency disaster debris removal, reduction, disposal and other debris-related services – was taken with the Court following the committee’s recommendation and selecting TFR as the primary contractor and BRC as the secondary contractor.

A request from Precinct 2 Commissioner Ronnie Vincent to utilize disaster recovery/mitigation funds in the amount of $194,000 for the partial rebuild and repair of county roads and culverts impacted by the April 2020 tornado was approved. “We’ve done a lot of work out there over the last two years,” Vincent said.

The Court approved a request for a capital purchase to be paid from the general fund balance and included on the FY2022 reimbursement resolution for the year-end issuance of legally authorized debt (tax notes), specifically, the repair of floors at the sheriff’s office, pursuant to Local Government Code Sec. 252.022, less the amount to be paid by insurance, not to exceed $53,200.

During informational reports, Murphy provided an update on the Coronavirus Aid, Relief and Economic Security Act, apprising the Court on everything that COVID monies have been used on, including assistance to school districts, IT hardware and software, building and HVAC upgrades, vaccine clinics and COVID hazard overtime pay. Murphy also mentioned the large backlog of cases in the court system which affect both the judicial departments and the jail. She reported that Judge Olen Underwood, presiding judge of the Second Administrative Judicial Region, recently appointed Judge Kaycee L. Jones to assist with the backlog of cases and that COVID funds will be utilized to pay Jones’ salary, ancillary staff and supplies. Murphy also reported on a one-time payment of $50,000, also from COVID funds, to be split evenly between the volunteer fire departments in the county as they provide essential services.

The Court recognized Jadyn Pace, one of the winners of Pine Ridge Healthcare and Rehabilitation’s recent art contest for his three-dimensional, 360-degree sculpture of the Polk County Courthouse square, constructed solely from recycled materials. The project took him 45 days to complete. Shawn Loring, president of the Board of Trustees of Polk County Recycling & Beautification, and several of the Polk County Recycling Center’s volunteers were there to congratulate Pace and present him with a certificate of achievement.

Murphy recognized Kari Miller on behalf of the county for once again receiving the Government Finance Officers Association distinguished budget award for FY2022. “It should be noted that the Government Finance Officers Association now includes performance measures,” Murphy said, as she congratulated Miller and County Auditor Louis Ploth for their work on the budget.

Murphy approved the Court and the audience that this month’s “Spotlight on Polk County” is about the informational technology department and may be viewed by going to the county’s website at www.co.polk.tx.us.

The following items on the consent agenda were approved:

• The amendment and renewal of facility operation and management services agreement with Management & Training Corporation relating to the IAH Secure Adult Detention Facility;

• An order accepting Bridgewood, located in Bridgeview Subdivision in Precinct 2, as a county road and add to the master street address guide;

• A request from the district attorney for asset forfeiture expenditure of seized property not to exceed $1,462.64 for the purchase of office furnishings;

• Sponsorship from long term recovery for the Office of Emergency Management 2022 hurricane party, not to exceed $1,500; and

• Purchase of a battery backup for the judicial center, not to exceed $2,490, to be paid from the information technology department’s capital outlay repair/replace equipment (budgeted funds).

Southern New Hampshire University (SNHU) is a private, nonprofit institution with an 89-year history of educating traditional-aged students and working adults. Now serving more than 165,000 learners worldwide, SNHU offers approximately 200 accredited undergraduate, graduate and certificate programs, available online and on its 300-acre campus in Manchester, NH. Recognized as the “Most Innovative” regional university by U.S. News & World Report and one of the fastest-growing universities in the country, SNHU is committed to expanding access to high quality, affordable pathways that meet the needs of each learner. Learn more at www.snhu.edu.

Angelina College officials and faculty members recently released the names of students named to the President’s Honor List and the Dean’s Honor List for the Spring 2022 semester and numerous local students made the list.

To qualify for the Dean’s Honor List, students must have enrolled in at least 12 semester hours of college-level work and have attained a grade point average of 3.5 with no grade lower than a “C”. The names of students who make the Dean’s Honor Lists are posted at the end of each long semester.

Angelina College recently released the list of graduates for the Class of 2022, with more than 500 students receiving their degrees and/or certifications in various fields of study. These conferred degrees and certifications encompass all graduates from summer and fall semesters (2021) and the Spring 2022 semester.

Following is the list divided by hometown of record and including the appropriate degree and/or certification: