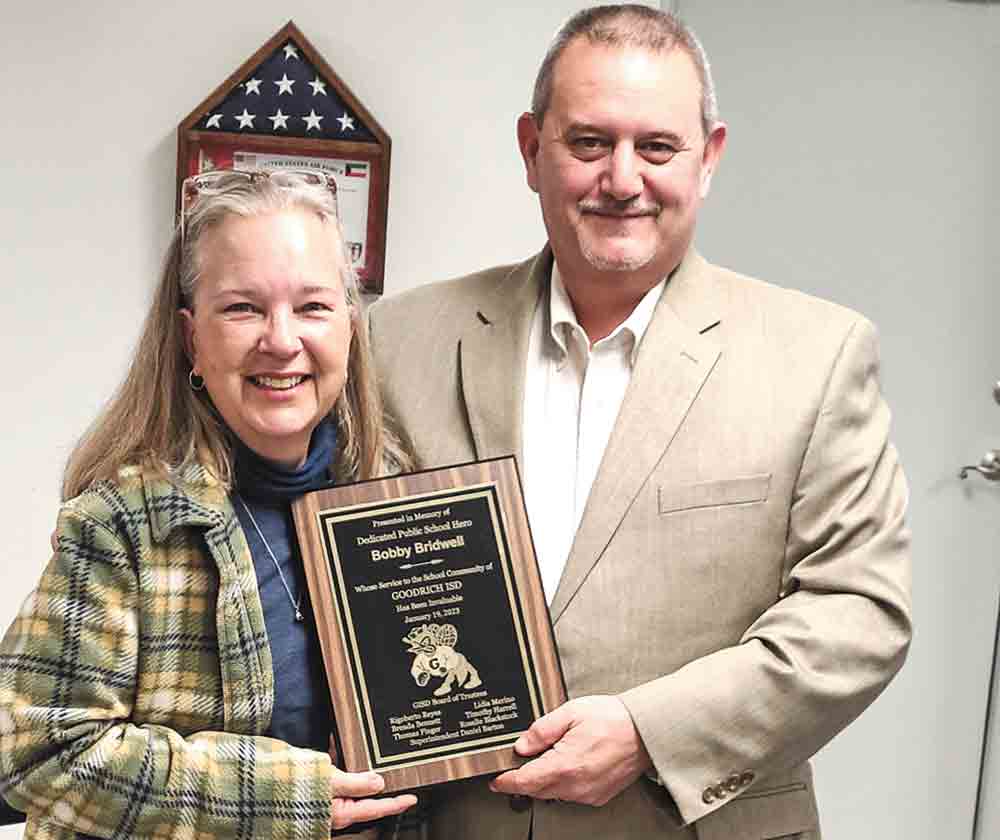 Julie Mack accepts a plaque in honor of her husband,Bobby Bridwell, who died a few months ago while serving on the board. The plaque reads, “Presented in memory of dedicated public school hero Bobby Bridwell whose service to the school community of Goodrich ISD has been invaluable.” Mack is pictured with Goodrich Superintendent Daniel Barton. Photo by Brian Besch

Goodrich ISD filled a position on its school board and extended the superintendent’s contract Thursday in the regular meeting for January.

Superintendent Daniel Barton had his contract extended in executive session, stretching the pact to January of 2026. Barton began at Goodrich in the 2021-22 academic year, coming over from Shepherd ISD.

The school board was recognized with gifts from students, as January is board recognition month. Barton also thanked the board.

“The job doesn’t pay well, and I know you know the importance of it,” Barton said to board members. “It is service and helping our kids. I have been in this for a lifetime, and through that lifetime, the people that dedicate their time and passion and give it to kids is always humbling to see.”

A special plaque was given to Julie Mack, wife of former board member Bobby Bridwell, who died a few months ago while serving.

“He loved y’all,” Mack told the board of Bridwell. “It gave him purpose when Bobby could no longer do physical things, like being a firefighter. He was still able to have a purpose in his last days, and I appreciate that.”

In executive session, Bridwell’s Position 5 was filled, as Mack will serve in that role.

In action items, the board called for an election on May 6. Several positions will be on the ballot, if contested. Those include Position 1 Rigoberto Reyes, a three-year term; Position 2 Lidia Moreno, a three-year term; Position 4 Rosalie Blackstock, a one-year term; and Position 5 with the newly appointed Mack, a two-year term. The positions with shorter terms were approved by the board over the past few years, meaning they can be challenged at the upcoming vote in May. Regardless of outcome at the election, the terms will be completed as listed.

A report was given by district principal Aubrey Vaughan for the STAAR testing scores that showed both improvements and setbacks in 2021-22 results when compared to the previous year. All math scores were down but many scores in reading, science and social studies had improved. The tests were taken just after Covid last year. The teacher turnover rate at Goodrich was 67%, while the state average is 17%. However, Barton reminded all that steps are being taken to do a better job retaining teachers in the coming years.

Assessments for the middle of the year are ongoing and progress will be reported in February’s board meeting. Barton said the assessments will show strengths and weaknesses of the district.

The finance department is currently working on an employee compensation plan for the next academic year. A special workshop is expected to be called after the February meeting and be approved during the March gathering.

The district’s emergency operation plan was approved by the Texas School Safety Center, which is the Texas Education Agency’s arm of campus safety.

The theater was checked off the maintenance list over the holidays by Lucas Roofing. The week after Christmas, a new roof was completed in one day.

Video surveillance installation is about 95% complete and is being utilized now. Around 57 cameras are up and running on the campus. In the past, around 20 were operational. Administration has access to the cameras through both phones and computers. They are also shared with the Polk County Sheriff’s Department.

The district will utilize a $200,000 grant by looking into fencing and doors. The grant states specifically that those two items are the top priority when using the funds.

Also approved in action items was an application for staff development minutes waiver. The 2,100 minutes are used for five staff development days that students do not attend classes. There is an agenda for each, showing that employees are getting professional development.