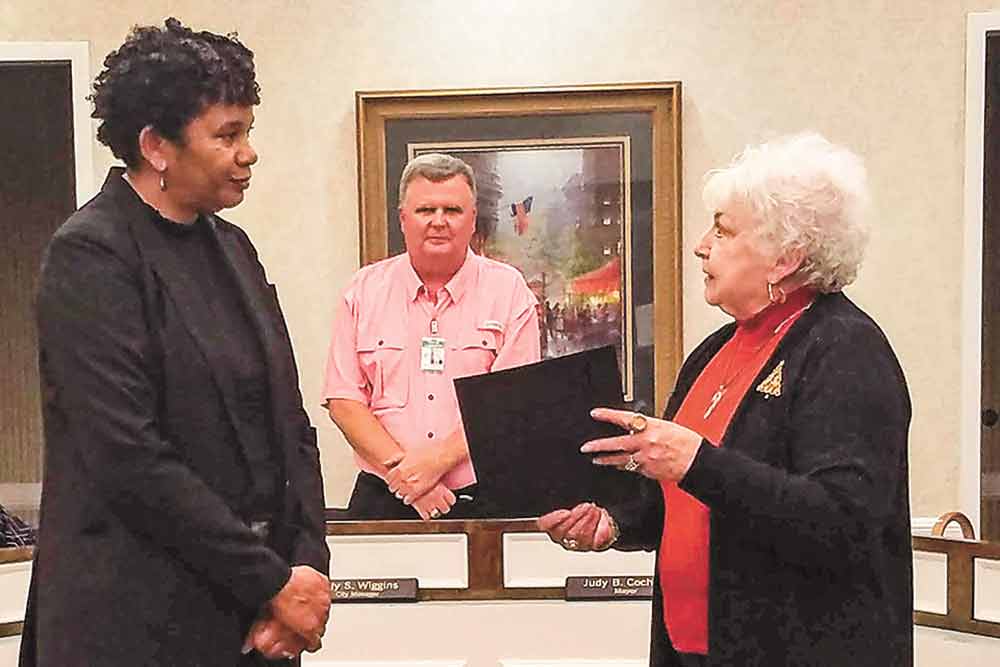 Livingston Mayor Judy Cochran presents a certificate of appointment to Dana Williams, the city’s new municipal court judge, after Williams was administered the oath of office. Williams is replacing Shelly Sitton who resigned the position because she will be the county’s new criminal district attorney effective Jan. 1. Photo by Emily Banks Wooten

Having formally accepted the resignation of Shelly Sitton as municipal court judge, the Livingston City Council appointed local attorney Dana Williams to serve the remainder of the unexpired term ending May 31, 2023. Sitton was elected criminal district attorney and will take office Jan. 1, precluding her from continuing service as municipal court judge. A certificate of appreciation was presented to Sitton by Mayor Judy Cochran who also presented the certificate of appointment to Williams after City Secretary Ellie Monteaux administered the oath of office to Williams.

Calling it “the city’s gift to the community,” City Manager Bill S. Wiggins praised the city’s staff for another successful Hometown Christmas and lighted parade despite the weather. Wiggins said it was a record, with 205 vendor spaces and almost 600 people in the Jingle Bell Fun run, more than twice the number that’s ever participated previously. He expressed his appreciation to the city staff for their organization and dedication.

Wiggins reported that the latest sales tax report from the state comptroller’s office reflected $396,959.54 for the month of October, a 6% increase over October 2021.

He also updated Council on several current development projects. Clayton Bates is building a new residence at 618 Morrison. The permit is ready to be issued for CP Homes Memory Care at 1864 N. Washington. Work is ongoing at the Highway 190 Apartments at 909 E. Church. Livingston Fitness Center is constructing a new building at 601 W. Church for yoga and pilates classes. Work is also ongoing on the Livingston High School concession stand at 400 FM 350 South. Livingston Pioneer Crossing Apartments at 1101 Dogwood are almost complete. Danny Moseley is constructing new townhomes on Jack Moseley Boulevard. Five additional new residences are being built at The Retreat Living LLC. Work is ongoing at The Vault Venue at 415 N. Washington and John Wells is constructing duplex homes in the 1300 block of South Houston.

Council approved proposed ordinances amending utility rates for water and sewer for master metered residential buildings although rates will not change for single meter residences. The action was necessitated by the rapid growth the city is experiencing, specifically, the volume of new apartment complexes and multi-family residences. Individually-metered homes will continue to be charged $28 per month for the first 2,000 gallons of water and $23 per month for sewer. Master or multi-metered residences will drop to $20 per month per unit for water, whether it is vacant or not, and $20 per month per unit for sewer, again whether it is vacant or not. Previously, city staff had to determine which units were vacant and back that amount out, resulting in lots of extra work. These changes should streamline the process for the city’s utility billing department moving forward.

Council approved the appointment of directors for the Main Street Advisory Board. The directors serve staggered terms and are appointed each December for two-year terms. Those appointed for the 2023-2024 term are Joyce Knierim, Molly Anderson, Kim Brown Jernigan, Whitney Van Hees and Thom Bruning.

Having received three bids, Council approved the selection of Langford Community Management Services out of Liberty Hill to provide grant administration services for the Community Development Block Grant Disaster Program for Regional Mitigation through the Texas General Land Office. Funds from the grant will be used for street repair.

Council approved the plat for the division of Blocks 3 and 16 of the J.C. Feagin Subdivision. Wiggins informed Council that Otto Lyons owns two square lots and wants to split them into four smaller rectangle lots to sell. Council also approved the final plat for the Highway 190 Apartments, a new 64-unit complex being constructed in the 900 block of East Church St.

Although Council entered into an executive session to consult with City Attorney James W. Wright, no action was taken upon return to open session.

Other business included approval of the minutes of the Nov. 8 meeting and accounts over $500.