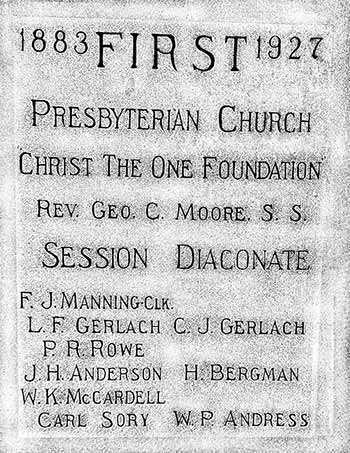 The First Presbyterian Church of Livingston is celebrating 140 years of existence, dating back to its start in 1882. Its location has not changed on North Washington, now in its third sanctuary to serve God in Polk County.

In November of 1882, Mr. & Mrs. D. H Fleming, Mr. & Mrs. J. M. Crosson, and Mr. & Mrs. C. M. Fisher became the first members of the Presbyterian Church in Livingston, most likely due to the work of Rev. T. Dewitt Burkhead, Evangelist for the Eastern Texas Presbytery. The three men became the Elders of the church and Rev. R. L. Currie, a missionary to the Alabama-Coushatta Indians served as supply preacher. Records found by David C. Duncan, in his 1992 report on the church, indicated that by the end of 1883, 13 members existed and construction of the first church began.

Judge J. M. Crosson of Livingston donated the block of land on which the current building stands in 1884, with the cost to him for the lot being $10. The contract for the church building was let to member C. M. Fisher who completed the building that year. The church bell, which is still in use, was donated by Mr. C. R. Miller, a local merchant and Episcopalian. The church building was also used by his church members for a period of time, along with occasional use by some Baptists.

In 1890, a manse (home for the pastor) was erected next to the church building and first occupied first by Rev. McCarty. It was remodeled in 1907 and the church was remodeled five years before.

In 1903, the “Ladies Aid Society” was formed and it became part of the Presbyterian denomination in 1911. Mrs. Verna Chapman served as first president.

The congregation voted unanimously in 1923 to build a new church building at a cost not to exceed $15,000. This is what is now called the Activity building. The new church was completed in April of 1927 and the first formal service was held May 8. The manse, which had been built in 1890, had to be demolished to make room for the new church.

A report written in 1924 by J.L. Davis, moderator of the Session, stated that membership that year was 137 and that eight persons by profession and 10 by certificate had joined the church through the year. Only four Communions were served that year, unlike the current first Sunday of each month.

Rev. P.P. Dawson began his service as Pastor in 1928 and, per church records, served until 1942. In 1929, the congregation voted to build a new manse on the southeast corner of the church property, “on account of getting a better fire rate.” This was completed in 1930 and Pastor Dawson occupied it with his family. In 1938, Session authorized the Deacons to have toilets installed in the church building and in 1939, finished the basement to fill the need for the Sunday School department to have additional classrooms.

In 1939, a cornerstone was added to the church building of 1927 which stated “1883—1927 First Presbyterian Church “Christ, the One Foundation” with the names of Rev. Geo. C. Moore, SS (Stated Supply) and six Session and three Diaconate names.

The sanctuary was on the second level with most folks entering off North Washington Street, climbing the stairs of this 1927 edifice. A manse was on the southeast corner of the property, now our parking lot.

The building was dedicated by Dr. J.L. Davis on Feb. 4, 1940, due to the final note being paid in full in the fall of 1939, with funds left to the church in the will of Mrs. Helen Sawyer. In 1941, new pews and an organ were installed, along with a new pulpit, chairs, and communion table.

Serving as pastor after Rev. Dawson was H.B. Streeter (1942-1944) and H. Addison Woestemeyer (1944-1947). In 1945, after some diligent work, the title of the church property was examined and changed from the “Northern Presbyterian Church” to First Presbyterian, Livingston, Texas. Clerk of Session at that time was Mr. P.J. Manning.

In 1947, the Session rejected a motion to sell the church properties and relocate and in 1950 opposed having “Negro Camps at Cho-Yeh,” which was supported by the Presbytery. Rev. E.O. Harrell was pastor from 1948 to Nov. 1950, followed by Rev. F.H. Stebbing in 1951, who served through August of 1957. Discussion, due to age and condition of the church, arose again in 1952, with a committee appointed to study possible sale. By 1954, a building committee was elected. A decision was made to not relocate. The church was air conditioned in 1963 and in 1964, the first woman, Edna Jones, was elected to serve as an Elder.

In 1967, a new committee to for the church property was appointed, and the group of 10 members on Dec. 13 recommended that the congregation sell its property on North Washington and move to a new location, build a new sanctuary, educational building and a manse. A sale price of $100,000 was to be set with a six-month time limit. No buyer was found, and in August of 1968, the congregation considered four options from the committee. Those options included remodeling the current sanctuary at cost of $10,000 (voted 11 for, 22 against); erect a new metal building at cost of $60,000 next to the sanctuary (6 for, 24 against); removingthe current sanctuary and erecting a new building and manse at a cost of $82,000 (6 for, 24 against); or keeping the present building and lot open for sale (9 for, 20 against).

The committee of 10 was dismissed and thanked, and in September of 1968, a new committee of three was elected to work up a master plan for the current property.

On Jan. 31, 1971, the congregation voted to build a new sanctuary, and in June, voted to remodel the manse. By summer of 1973, the new sanctuary (the one currently used) and the remodeled manse were complete, and the sanctuary was dedicated on Sept. 2, 1973.

The Tracker Organ was built and installed with its dedicatory recital on Jan. 8, 1978. Plans were made to renovate the old sanctuary then approved in mid-1983. In Feb. of 1984, a sound system was approved, as was the cross in the new sanctuary, with installation in March 1984. An activities building was planned and completed in late 1989. By this time, the manse had been removed and the old sanctuary remodeled.

In late 1995, the current bell tower was dedicated and is still rung prior to each service.

The church received a major financial gift in 2000 from the estate of Mr. Whisenhunt and used part of it to purchase 13.727 acres of land on U.S. 190, just west of Livingston from David Hancock and Roger Graves in December of 2006. Another part was used in 2008 for the construction of the fellowship hall and the rest remained in an account that today continues to provide funds monthly for expenses.

The fellowship hall was finished prior to Sept. 12 of 2008, when Hurricane Ike hit Livingston (and east Texas) destroying much in its path. The church’s roof suffered major damage, resulting in water damage in the balcony and sanctuary, shifting use of the fellowship hall for worship. Renovation of the sanctuary and continued work of the church was taken over by the Session.

The Rev. Galen “Joe” MacDonald became the next pastor in September 2010, with Sandy Davis, clerk, and Mark Nye, treasurer, and 12 deacons and 12 elders. Since then, the deacons have been disbanded, and there are now seven elders serving as the Session.

In 2013, church records show membership at 109, and it is now below 80 in 2022. Rev. MacDonald left in the fall of 2020, and under the leadership of Worship’s Paul Laverty, guest pastors filled in till the Rev. John Hirling became interim in January of 2021. The 1927 activity building continues to hold the pastor’s study, the church office is run by Robin Sessums, the choir area, as well as the second floor with classrooms, ready for use. Fellowship hall continues to be used for adult Bible study classes, luncheons once a month, and special groups approved by Property team. The 1973 sanctuary has an updated video and sound system and holds 10 a.m. services every Sunday.