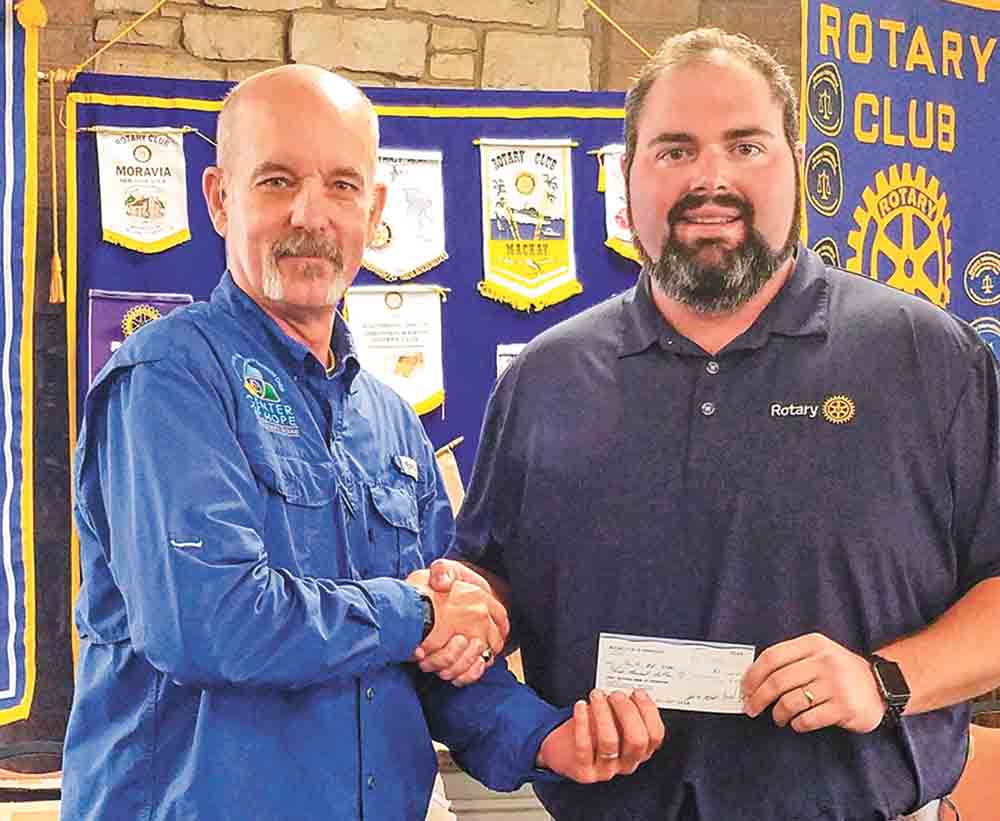 “I’m here today to tell you what’s going on at Center of Hope and what’s changing,” Mike Fortney said as he addressed the Rotary Club of Livingston recently.

“Our numbers have gone up. There’s a lot of need here. If you know someone that needs help, send them our way and if we can’t help them, then we’ll find someone who can. Tuesday was the slowest day we’ve had in months. We had a little over 70. We usually have over a hundred,” Fortney said.

“That’s the food ministry, which, pardon the pun, is our bread and butter,” he said, adding that huge tractor trailers from Southeast Texas Food Bank come and deliver pallets of produce and cheeses and that when they have any left over, they share with some of the smaller food pantries around the area. “Food is still a huge ministry for us and every person that comes in for food, comes in for a chat with a caseworker

“We also have our cancer support ministry in which we see about 70 cancer patients on a regular basis and help them with gas money, parking, the occasional overnight stay,” he said.

Fortney also referenced another ministry, Campaign 300, in which the center helps people coming out of crisis with money. “We may pay a utility bill, get a car repaired or get a prescription filled.

“Another of our ministries is disaster response, which we had none this year. It is a ministry waiting to go into action when it’s needed,” Fortney said, adding that County Judge Sydney Murphy has asked the center to take on volunteer coordination.

Fortney said the center has a couple of new ministries, referring to the fact that the Emergency Health Board and the Empty Stocking Fund have now been handed over to the Center of Hope.

“The Emergency Health Board was Peggy Wooten’s brainchild and through it, medications were supplied for people in Polk County or sometimes, help with co-pays. The Emergency Health Board did a marvelous job but asked us to take over this ministry,” Fortney said, adding that it is “running smoothly” and that they helped five different families with medications this past Tuesday.

As for the Empty Stocking Fund, Fortney said the center is setting up Christmas Central, a massive toy workshop with a little bit of clothing for toddlers and below. He said they are partnering with G.R.A.C.E. Pregnancy Outreach to disseminate the clothing to toddlers and infants.

He said the team met and talked about the transition and made some changes to how the program will operate moving forward. In the past, local civic clubs such as Rotary shopped at Walmart for items for various local families in need, wrapped the gifts and then delivered them to the respective families. Now, the clubs will contribute money to the center and the center will purchase the toys and clothing have it all on display in their big warehouse, allowing those parents to shop for and pick out the toys for their own children. He added that the toys will be separated by price point, gender and age and that this method evens out what every family receives.

“From here on out, it will be called Christmas of Hope Empty Stocking Program. We will be open the next three Saturdays from 9 a.m. to 2 p.m. and we’ve added two Fridays because the numbers are skyrocketing. We already have over 400 kids registered so far which is about 150 more than Empty Stocking did last year. The families come through. We put our arms around them and visit with them,” Fortney said. “The community has been amazingly generous. This is going to bless hundreds and hundreds of people in Polk County.”

Center of Hope is located at 600 S. Washington in Livingston.