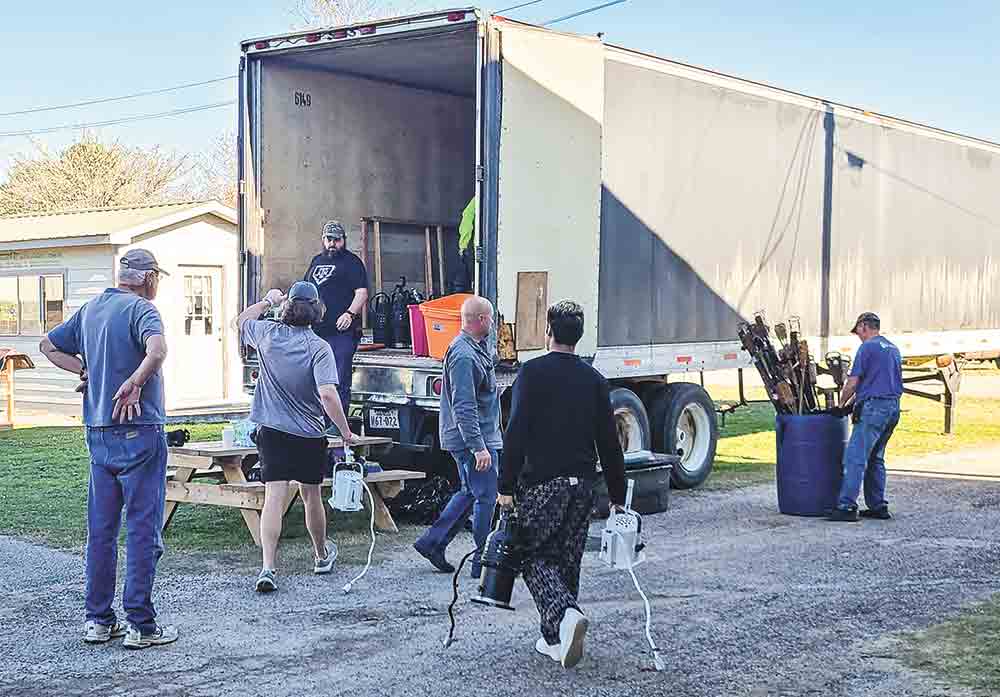 Volunteers with First Baptist Church unload one of two tractor-trailers at Pedigo Park Monday to begin the process of building Bethlehem. Photo by Brian Besch

For more than two decades, hundreds with Livingston’s First Baptist Church have built an ancient city each year in just a few days. The annual event entitled “A Night in Bethlehem” is to allow thousands to experience a similar feel of the original Christmas.

Dec. 2-4 off Highway 59 in Pedigo Park, the church will present a drive-thru recreation of Bethlehem on the night Jesus was born. As always, the park will also be lit with Christmas decorations and hayrides are included in the fun.

The event began in 2001, when a staff member had taken part in a similar production further north at First Baptist Church in Jacksonville, Texas. The staff also visited similar productions in Lufkin and Conroe to gather ideas.

In its first year, the church was located just across from the Polk County Enterprise offices on Calhoun Street. Decorations were made of plastic and cardboard, comparable to most other productions around the state. Eventually, the church partnered with the city, allowing it to grow and change a little every year.

“A Night in Bethlehem” has grown in popularity and allowed the chance to serve the community and those who travel to visit.

“I think it is two-fold,” First Baptist Church Pastor Brett Lester said. “One is we obviously want to show the story of Christ at Christmas. Especially with the commercialism of Christmas, sometimes that message gets lost. Also, it is a gift to our community. There are families that come every year, and this is part of their Christmas
tradition. There are churches that drive two hours with giant groups. To be able to give something like that to a community like Livingston, that is a big, important part of it. When you see kids’ faces light up because they come around the corner and it is something they’ve never seen before, that is a big part of it too. I think they will see that the story of Christmas is the story of Jesus, and it is not just his birth.”

This year, narration will play at each stop and characters will act out scenes as visitors hear the story. Guests this year can also receive a written copy of the narration in Spanish.

Visitors are taken back in time to the village, with all pointing to the idea that a baby has been born. In years past, the tour ends with Joseph, Mary and baby Jesus. However, that will now be extended.

“It will be bigger than last year with the drive-thru, and it is more of the story than just Christmas, so we are excited about that,” First Baptist Student Pastor Brad Butler added. “There are a lot of animals and there are people in character who are trying to be as fully immersed as they can.”

Monday was the first of four long days it takes to wall off the pavilion at Pedigo Park, then unload and set up two tractor-trailers
of detail that completes the transformation. Local students from 4-H bring their show animals out to participate in the event as well.

It is estimated that over 250 people take part in creating the scenes, acting characters and making sure all runs smoothly. The sheriff’s department allows inmates to take part in the building process. While not allowed to attend, it is video recorded to see what they have built. They then return to help tear it all down.

The drive-thru performance is around 20-25 minutes, and most wait about an hour in their vehicles to reach the front of Bethlehem. At one point last year, the line curled around to Livingston Junior High. Many will arrive an hour early to be at the front of the line. Lester said Saturday night is usually the busiest, while early Friday and late Sunday are times when the wait could be shorter.

Around 4,000 people are expected to come through the city gates to experience Bethlehem. Butler said he has heard of people coming from as far away as Dallas to take in the production. The free three-day event is 6-8 p.m. Friday, Saturday and Sunday. Every car arriving before 8 p.m. will be admitted, while those arriving after must be turned away.