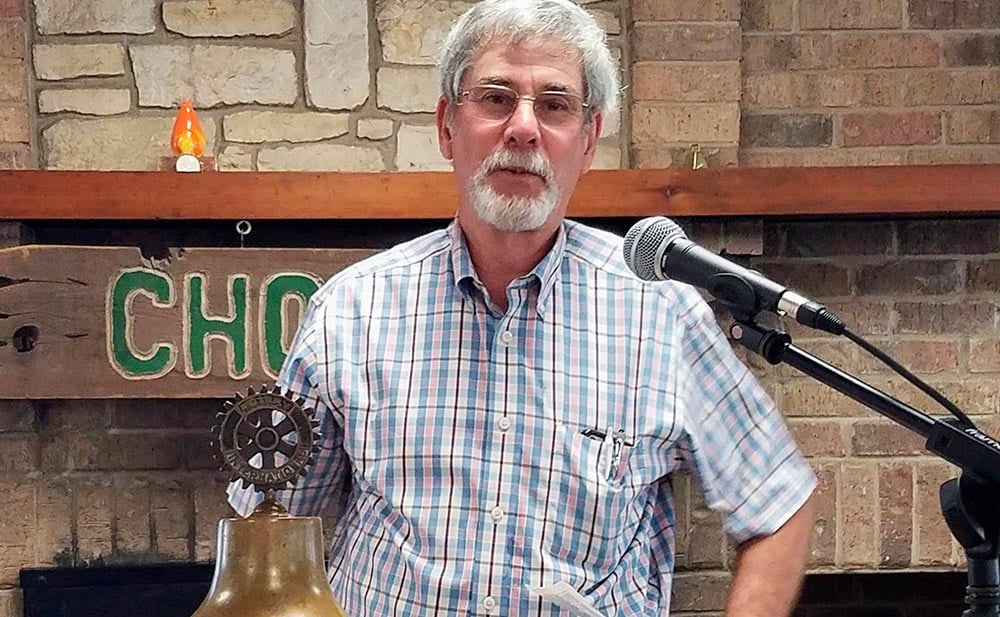 Dr. Milton Thiel, a local veterinarian and Rotarian, was the Rotary Club of Livingston recently. Photo by Emily Banks Wooten

“Agriculture has always been near and dear to me,” Dr. Milton Thiel, a local veterinarian and Rotarian, said when he presented a program to the Rotary Club of Livingston recently regarding food inflation and why it is not coming down any time soon.

“Now that I’m retired, I have more time to read and watch my phone. Maybe a little knowledge is a dangerous thing,” Thiel said. Calling his program “A View From Here,” he said he derived the information from Livestock Weekly, which is published in San Angelo, and the National Beef Wire.

“There are about 600 million acres of available land and about a 1/3 of land mass of the U.S. is suffering drought. As of Nov. 1, nearly everything west of the Mississippi River is in some stage of drought. The Mississippi River is lower than it’s ever been. Lake Meade is at about 30% capacity. The reason for concern is that seven states depend on the water from the Colorado River,” Thiel said.

“California and Arizona supply nearly 50% of the vegetables grown in the U.S. With the drought, a lot of this land is not being planted. Farmers are having to cut back the acreage they plant so that they have enough water for what they do plant,” Thiel said, throwing in the interesting fact that it takes over 28 gallons of water to grow one ounce of almonds. He also said that the tomato harvest out west was 50% of what it’s been in the past.

“Moving on to Florida, they’re having the opposite problem. Hurricane Ian caused $1.8 billion worth of damage to the state’s crops and agriculture infrastructure. The biggest loss was in citrus with $416-$675 million in losses. Florida produces 60% of the citrus consumed in the U.S. And the storm damage got 11% of the trees so the next few years there will be reduced supplies. Ten to 15% of non-citrus fruits and vegetables were lost in the storm,” he said.

Regarding beef prices, Thiel said the COVID pandemic and the production lines at packing plants are what has caused the increase. “Up until now, prices have been due to the bottleneck in the packing plants and the packers made a lot of money. It was said that they were making up to $900 a carcass.

“With the drought, there’s been a tremendous liquidation and culling of cattle. Today there is a record amount of beef in cold storage but by next year, this surplus will be used up and there will be fewer calves coming to market due to fewer cows. In July the total number of cattle was 98.8 million, which is down 2% from 101 million. In Texas that number’s probably down 10 or 15%.

“Feed for livestock is more expensive. The drought has decreased the amount of forage as well as corn needed to fatten them,” he said.

Thiel told about the Asian long-haired tick, a recently identified tick in the U.S. that is spreading westward from the East Coast. “It carries a protozoan that causes anemia in animals. This tick is self-cloning, meaning it doesn’t have to have a mate to reproduce. So just one tick can start a huge infestation.

“The highly pathogenic avian flu has caused millions of chickens to be destroyed, resulting in an increase in the price of chicken and turkeys. In Iowa, 13.4 million birds have been put to sleep since the spring.
“Internationally, we have the war in Ukraine which has impacted food production – specifically, 29% of global wheat exports, 32% of barley exports, 17% of corn exports. The war has impacted export, especially to the world’s poorest countries. Three hundred million people depend on this food source. People in the U.S. spend 6.7% of their annual disposable income on food. Poor countries such as Nigeria, Kenya, Zimbabwe, India, Turkey, Russia and even Brazil spend 20-70% of their income on food.
“China imports 89% of its energy and 72% of its food. China is the United States’ largest agricultural trading partner. However, if China can source soybeans or beef from Brazil, they will,” he said.
“Other factors internationally, Europe has had its driest year in 500 years. China and India were also in drought. Pakistan was flooded.
“The world is on the brink of a global food crisis. There needs to be more acres of food planted. To balance the supply and demand, the world needs 25 million more acres of arable land. The United States doesn’t have it. Europe doesn’t have it. Ukraine doesn’t have it. Who has it? Russia and South America. So, expect more of the Amazon to be closed. Russia, with its large land mass and cold climate, will benefit from global warming due to more acres becoming arable. In conclusion, food inflation is here to stay for a while in my opinion,” Thiel said.