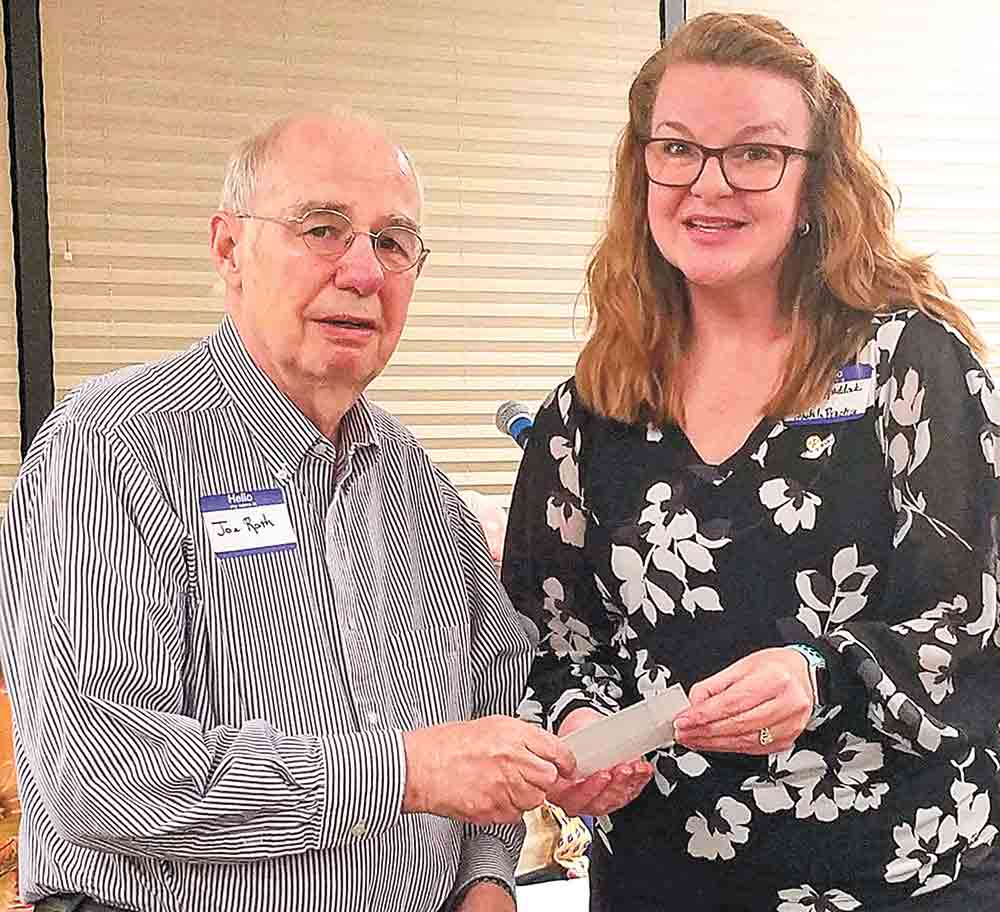 Suzi Howe, Rotary International Director for 2020-22, was the guest speaker for Rotary Homecoming, an event hosted recently by the Rotary Club of Livingston to celebrate its history, achievements and membership.

Howe owned and operated South Shore Montessori, a private school, until her retirement in 2019. It was during the construction of that school that she first learned about Rotary, as her broker, architect, and others involved were all Rotarians. Within six months of joining Rotary in 1992, she was already serving on her club’s board.

Passionate about sharing her training and educational skills, she has volunteered as training leader and as a member of the Rotary Leadership Training and Development Committee.

She and her husband Bill are members of Rotary’s Arch Klumph and Bequest Societies as major donors. In 2005, she won the Dome City Award on behalf of all Houston-area Rotarians for her work running logistics for the 650 Rotarian volunteers at the Houston Astrodome who helped 250,000 Hurricane Katrina evacuees from New Orleans over a three-week period.

Howe is also a talented fundraiser, having organized three separate Million Dollar Dinners, the last one alone raising $3.8 million for The Rotary Foundation. “If you make eye contact with me, I will be asking you to make a contribution,” she says.

Howe is a recipient of the Service Above Self Award, and The Rotary Foundation’s Distinguished Service Award and Citation for Meritorious Service. As a 2020-22 Rotary International Director, she was one of 17 international directors serving the 1.4 million Rotarians in over 200 countries.

Demetrius Harrel, governor of District 5910, introduced Howe. “Rotary takes us around the world in many capacities. I’ve been a Rotarian since 1988. I can say the passion comes from within. Through Suzi, we have begun our own Polio Plus Society membership in the district.”

Ward Jones and Reed Brooks, two longtime Rotarians who have died recently, were remembered and mentioned by several, as both of their wives and other family members were in attendance as guests.

Dr. William E. “Bill” Watson gave a brief overview of the history of the Rotary Club of Livingston and some of its projects. He said the club formed around 1936.

“Ward (Jones) always talked about 1956 when they put in the city pool. And then in 1972, the Rotary, Lions and Pilot Clubs came in together and operated the city pool for 15 years. The first big fundraiser in 1980 was to make repairs to the pool and we raised about $3,000,” Watson said.

“Then in 1984 there was a shrimp boil fundraiser that the whole town participated in to buy a flagpole to put over there by Whataburger. Then in 1987-88 we built a gazebo next to Jack in the Box. 1986 had been the 50th anniversary of Rotary in Livingston so we called that area where we built the gazebo Anniversary Park,” Watson said.

“Then in the later 90s, two presidents combined their budgets and put up a building over in the city park. Since 2000, we’ve become involved with two more programs – Dolly Parton Imagination Library and Don’t Meth With Me. We go back a ways and have always strived to live our motto – service above self,” Watson said.

Judy Blain is the president of R.E.A.D. (Reading Encourages Advanced Development) which is the Polk County affiliate for the Dolly Parton Imagination Library. R.E.A.D. is a program in which parents may enroll their children and the child receives an age-appropriate book in the mail every single month from birth to five years old.

“I want to thank y’all for everything you have done and are doing. In December of 2012 we sent 14 books to Polk County. This month, we will send 1182. We have graduated well over 2,080 kids and are on target this year to ship out 14,400,” Blain said, adding that the Dolly Parton Imagination Library has shipped 194 million books worldwide.

Rotarian Blair McDonald presented an update on the Don’t Meth with Me program which is a program that targets fifth-graders and warns them of the dangers of meth.

“We’re funded by local organizations and we talk to students about goals and the choices they make. Every child gets a T-shirt, a pencil and a wrist band. Since the program started, we’ve seen a 44% drop in drug crimes. Fifth-graders have changed drug-related crime,” McDonald said, adding that the program has been provided to seven school districts for 10 years and has reached over 7,000 children.

McDonald also spoke about Rotary Youth Exchange, stating that every year, Rotary sends about 8,000 students out into the world for a year. They must be 15 and above and all the work is done by Rotary volunteers.

“Our club has sponsored nine kids in the last 10 years. Each student lives with two or three families while they’re here,” McDonald said.

Cara Haddock is the director of development for Faith in Practice, a faith-based ecumenical group that provides international service with some 50 teams a year participating globally. “The team has raised almost $8,000 in Reed’s (Brooks) memory since his passing Aug. 20,” Haddock said.

Rotary brings together a global network of volunteer leaders dedicated to tackling the world’s most pressing humanitarian challenges. Rotary connects 1.4 million members in over 200 countries and geographical areas. Their work improves lives at both the local and international levels, from helping those in need in their own communities to working toward a polio-free world. For more information, visit Rotary.org.