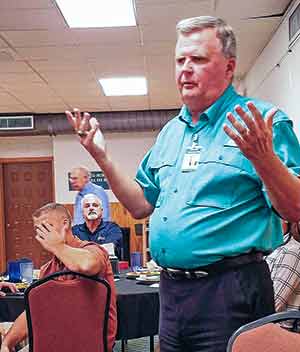 “We’re seeing so much growth in our community and our county. Folks, we’re growing by leaps and bounds,” he said, adding that the city has been installing new water lines and new electricity loops and electricity reconductoring.

Wiggins said the city is about to start a large infrastructure project in the spring on “Cemetery Hill” that will accommodate Postel International Inc., the metal fabrication plant in the 1800 block of South Washington; Camp Cho-Yeh, which has plans for expansion; and the Baskin project in which acres of forest have been cleared for commercial development.

“We’re trying to prepare for the future. This growth is coming. And with the Supreme Court’s ruling regarding electronic bingo on tribal lands, Naskila will continue to grow. They have plans,” Wiggins said. “If you have a business or are with a business, I’ll just say make sure you’re ready. It’s coming.

“We’re working on an aging sewer plant because we’ve got to handle the increased growth. We’re hoping to start next month on our automatic metering for our electricity and water and have everything in place citywide by the end of next year. It’s going to be huge,” he said, adding that utility customers will be able to log in on a computer or on the phone app and see their usage and that it will also have the ability to trigger abnormalities and alert the customer. “It’s going to be good for the city because the first week of every month we have four or five guys that have to physically go out and read meters. It’s a huge safety factor because in this day and age you just don’t know what someone might do if they see someone walking in their yard. It’s something I’ve worried about since becoming city manager.

“Moving on to our police department, Uvalde is still fresh on everyone’s minds and should be. We have an officer on every school campus in the city and our police department undergoes periodic trainings throughout the year with the sheriff’s office, Texas Ranger, volunteer fire departments and first responders. They work with all the other agencies. We’ve had two audits in the past month and both were 100% perfection,” Wiggins said.

“I think Chief Matt Parrish and Lieutenant Marty Drake visited with you previously about the Flock camera system. It went live on Oct. 5 and since that time has counted 749,359 cars and recovered 13 vehicles and one camper trailer at a value of $430,500. It’s been very, very successful and will continue to be as all these other communities get involved,” Wiggins said, adding that it has the capability to do traffic study counts and that the department has started tracking that.

Wiggins gave an update or overview of various development projects underway throughout the city.

“The convenience store and 64 new apartments on 190 East are making good headway and the 80-unit complex on Dogwood is hoping to be open by the end of the year. The King Ranch John Deere dealership and turf business is coming in next to Premiere Autoplex and is supposed to be something neat. We’re reviewing plans for CP Homes Memory Care that is going in next to Country Place Senior Living on North Washington. Livingston Fitness Center is building on the old volleyball court a new building for yoga and pilates. Our good friend Jimmy Banks and some of his partners are putting in some spec homes in The Retreat, with four already underway. They bought the remaining 19 lots that were available.”

Wiggins reminded everyone of the upcoming holiday events including the downtown lighting ceremony on Nov. 22, A Drive Through Bethlehem Dec. 2-4, and Livingston’s Hometown Christmas and lighted parade on Dec. 10.

Reviewing other things the city did this year, Wiggins reported that the city renamed the Whataburger pond Cannon Pond & Park following the generous donation of the land from the Pritchard family. He also reported that the parks department provided over 530 swim lessons this past year and that the volunteer fire department has responded to a record number of fire calls.

“Please, please be careful with fires. There are lots of dead trees and that is one of our biggest worries,” Wiggins said. “In closing, I just want to emphasize go vote. There are a number of important races both statewide and locally.”