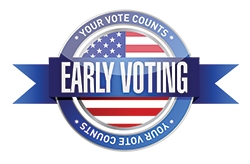 Voters heading to the polls will select the following:

• Member, State Board of Education, District 8