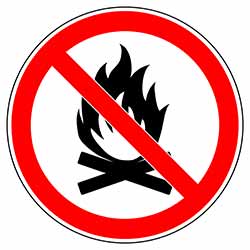 Polk County Sheriff’s Office Deputies responded to a burn ban violation off of FM 62 Monday in the Corrigan area off Bryant and Pine Groves Road that destroyed property and several acres of land.

Deputies arrived and observed a homeowner attempting to put a fire out that had spread from a burn barrel on his property. As the fire traveled quickly to a nearby residence, deputies immediately attempted to extinguish the flames, without success, due to the size of the fire.

Deputies then began warning other residents of the danger as fire officials and Texas Forest Service personnel arrived to protect other nearby homes and structures. First responders worked tirelessly for hours, finally able to contain the problem.

The fire was caused by a homeowner who was illegally burning household refuse in a burn barrel on his property. Embers escaped from the barrel and caught the vegetation, which spread to nearby properties, destroying a home, two structures, a travel trailer, and approximately 14 acres. Although many people suffered severe property loss or damage, no one was hurt in the incident.

Deputies identified the homeowner, who advised that he was aware of the current burn ban. The homeowner was subsequently arrested for illegal burning (in violation of burn ban) and booked into the Polk County Jail without incident. This case is still under investigation with help from the Texas A&M Forrest Service, with additional charges possible.

The Polk County Sheriff’s Office and local volunteer fire departments would like to remind all that Polk County remains under a burn ban. The Enterprise will have further reports once the ban is lifted.