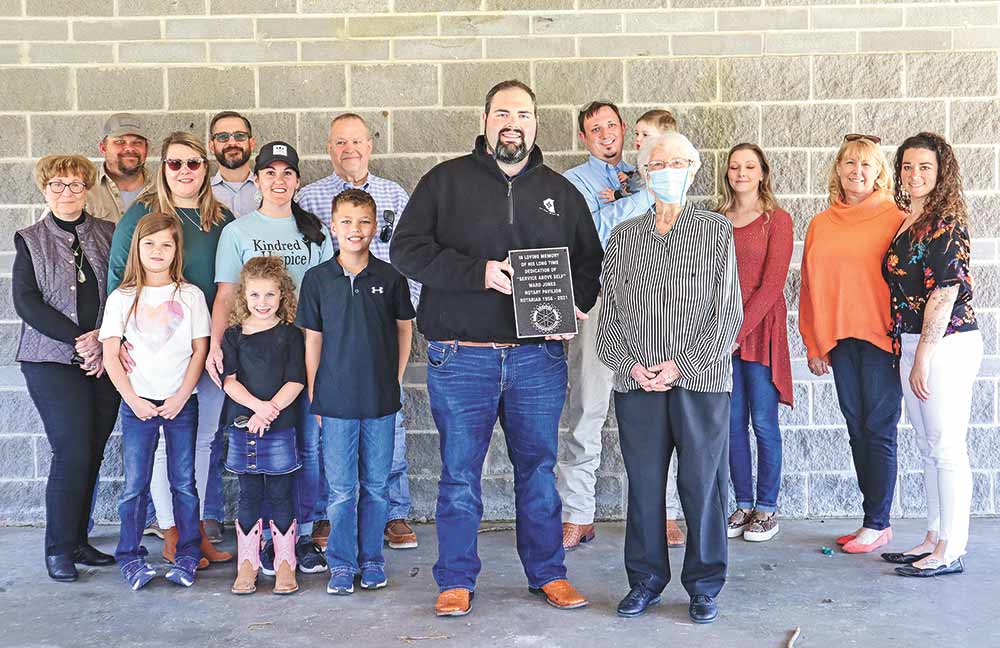 Thursday was a special day in the history of the Livingston Rotary Club as members met at the Rotary Pavilion in the City of Livingston’s Matthews Park to picnic and to dedicate and rename the pavilion in memory of Ward Jones, a 65-year member of the club. Jones died in May of 2021 but his family gathered Thursday as Rotary Club President Andrew Boyce read the inscription on the plaque that will soon be mounted on the pavilion. It reads, “In loving memory of his longtime dedication of service above self, Ward Jones Rotary Pavilion, Rotarian 1956-2021.”

“I want to thank all the members of Rotary Club for this. Ward would be in hog heaven,” his wife, Billie, said. “He loved this club and each of its members. He was part of everything that went on with Rotary Club. I remember back during the Folklife Festival he and Bob Belt went around selling turkey legs out of a wagon and sold out. He loved this club. Our family thanks each and every member for this. He would be thrilled to death.”

On behalf of the city, Mayor Judy B. Cochran remarked on the importance of the event. “This is a special day and I’m so pleased that this pavilion is being dedicated to Mr. Ward Jones. Thank you to the family for being here.”

“About 50 years ago, Ward Jones did the job of bringing me into Rotary. We’ve known each other for 50 years and we’ve shared some things. He truly practiced Rotary congeniality. Each week he’d shake everyone’s hand and go around asking, ‘How are you doing?’,” Watson said.

“He had so many stories and we’d get him to tell them. He told about when the city swimming pool was put in up on Cemetery Hill in the 50s by all the service clubs. He knew when and how the pancake supper started. Evidently, in the late 50s the Rotary Club had a popcorn machine that they used for all the community events and they loaned it to the Lions Club and never saw it again. I came in ‘72. In ‘76 there was a bicentennial and there was a running thing with the Lions Club,” Watson said, telling about a tug of war in which the two clubs participated.

“As his health declined, one thing I think he missed as time went by were the dress up events – the Rotary Installation Banquet in June and the Christmas Party. We were both born in Polk County, both served in the service and came back to Polk County and started businesses. We were both in rentals. We certainly appreciated him and loved knowing him and Billie,” Watson said.