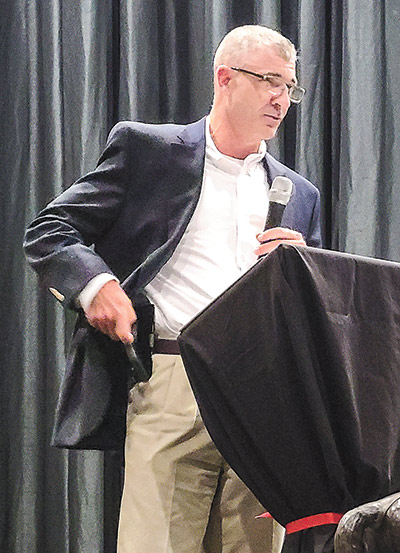 William Lee Hon was named Polk Countian of the Year during the 86th Annual Awards Banquet of the Livingston-Polk County Chamber of Commerce Thursday at the Polk County Commerce Center.From Enterprise Staff

William Lee Hon was named Polk Countian of the Year during the 86th Annual Awards Banquet of the Livingston-Polk County Chamber of Commerce Thursday at the Polk County Commerce Center.

Below are the remarks read prior to the presentation of the award:

Born Oct. 15, 1965 in Freeport to Ferris Gene “Jim” and Rita Williams Hon, Hon grew up a fifth-generation Polk Countian, along with his sister, Laura, of Cedar Park. He was raised in Livingston, attending all 12 years of school in the Livingston school system, from which he graduated in 1984. While in high school, Lee was active in FFA. He was even awarded the highest FFA Degree, that of American Farmer, at the National FFA Convention in Kansas City, Missouri in 1984.

Following law school, he practiced law for the Campbell DeLong Law Firm, the oldest law firm in the State of Mississippi. He enjoyed his work there, but the call to Texas was so strong, he decided to take a pay cut to move back to his home state.

Hon has personally handled several thousand felony cases as a prosecutor and served as lead prosecutor in over a hundred jury trials.

In other community service, Hon served for 11 years as a fireman for the Livingston Volunteer Fire Department. He was actively involved with the Livingston Youth Baseball and Softball Associations. He is the past president of the Livingston Rotary Club, and in 2009 he was named a Paul Harris Fellow by that organization. In 2011, Hon was named by the Livingston Independent School District as an Outstanding Alumni. He is a member of the First United Methodist Church, where he previously served as chairman of the church council.

Accepting the award, Hon recognized his sister and kids who traveled from out of town to be there.

“This means a lot to me. I’d give anything if my mom and dad were here to see this. I know they’d be proud,” Hon said and then introduced his wife, sister and kids.

He said that perhaps he’d had a premonition regarding the award because just that very morning he’d penned a Facebook post regarding Polk County and the way in which it has shaped him. He then read the post to the audience:

“This morning I had to do an interview in Trinity and was asked to discuss my family, my background and my career accomplishments. I have always found it a little awkward to talk about myself—something many people might find odd for someone involved in politics. Nevertheless, it caused me to reflect in my own mind over many of my memories and life experiences from having grown up in this little corner of East Texas.

“As I was driving back toward Onalaska alongside Lake Livingston on FM 356, I noticed how different things looked from my childhood and yet how much many things still looked the same. I am sentimental—very. I stopped to take this photo of the lake and the bridge and was instantly transported back in time to days spent bass fishing on the lake with my Daddy. I reflected on other memories of my youth, of generations of ancestors and extended family, of school days and teachers, of friends that I’ve lost over the years and others that have endured a lifetime.

“The better part of my 56 years on this Earth have been spent right here in Polk County. I look around and see so much progress and growth and I’m both excited about the future but also nostalgic for the way things were during my youth. I’ve enjoyed my trips to San Jacinto and Trinity Counties especially of late because they’ve helped me remember that “small town” feel that I was so familiar with here as a child and before so much development began.

“My life has been richly blessed. I’ve been so influenced and shaped by my surroundings and the friends and family I’ve enjoyed over the years. I was asked today what I was most proud of from my career as district attorney. My response was very simple: ‘The difference I’ve made in my community and in other people’s lives.’ That’s a very subjective answer and I know it’s nearly impossible to measure the ‘difference’ one makes in the world around them. Nevertheless, I’m humbled and appreciative of the times where victims and even people I’ve prosecuted have told me directly that I made a difference in their lives.

“More importantly, I reflect back on my parents, my grandparents and the many aunts, uncles and extended family and I hope they know I’ve tried my best; and I hope that the things I’ve done to try to make a difference in my community would have made them proud. I love this place. In spite of all the growing pains this area is going through with traffic and development and new residents, I am still so proud to be from Polk County. I’m proud to tell people I’m from here. My surroundings and life experiences from having spent so much time here are an indelible part of my character, my soul and who I am. It may not be perfect, but I would not want to have been from anywhere else.”