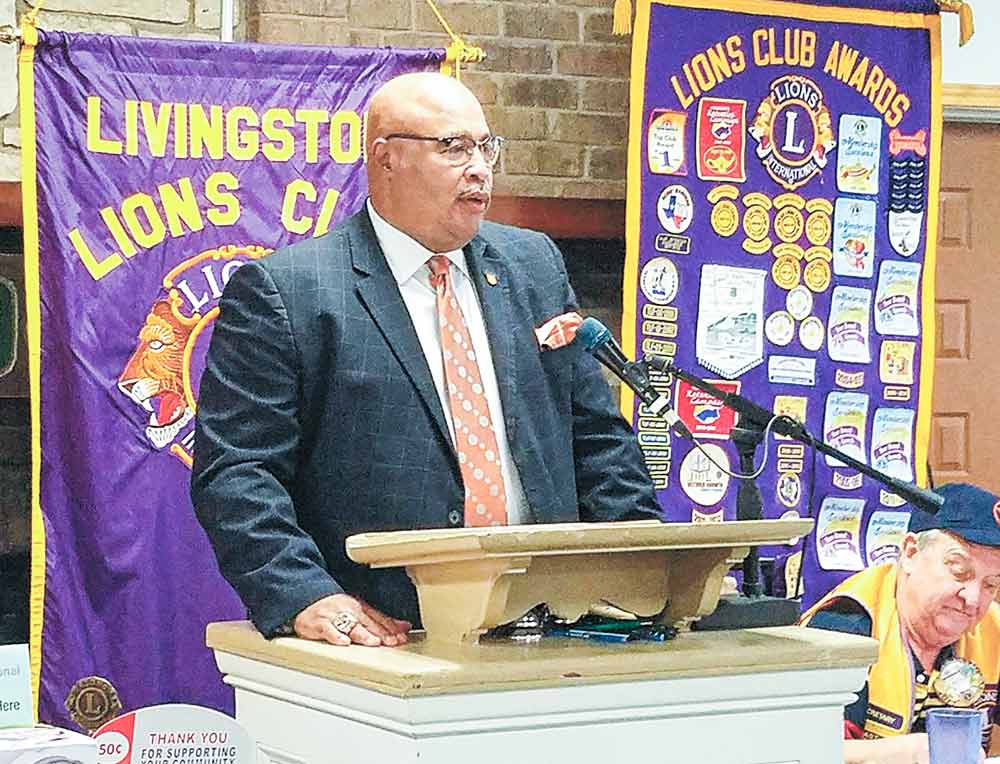 Two local youth groups were the beneficiaries of a surprise auction during a recent meeting of the Livingston Lions Club. Invited by Lion Benny Fogleman, Daryl W. Wade, Director of the Houston Astros MLB Youth Academy in Houston recently spoke to the local club about the academy. Not only did he bring Houston Astros baseball caps for everyone in attendance that day, he also showed up with an authenticated, signed baseball from MLB Shortstop Carlos Correa which he proposed auctioning off.

Lion Fred Smith was the winner with a $1,000 bid. The proceeds were split between Livingston Youth Baseball and Making Sports Possible. The two local organizations were represented by Shannon Goins and Gisele Ivy, respectively.

Wade, whose family owns land in Moscow, is the former Director of Athletics of the Houston and Aldine ISDs. He has 28 years educational experience with 25 of those in school and athletic administration. A native Houstonian and graduate of Waltrip High School, he received his bachelors degree from Paul Quinn College in Waco and his masters degree from Prairieview A&M University. A member and captain of the Paul Quinn College baseball team, he and his teammates won three conference championships. He has scouted professional baseball and coached football, both boys’ and girls’ basketball, baseball and track during his coaching career in the Athens, Devine and Aldine ISDs.

He spent 23 years at Aldine ISD, six of which he taught history and was an administrator at Nimitz High School. Promoted to the Aldine ISD athletic department, he served 17 years as the assistant athletic director and athletic director before becoming the athletic director of Houston ISD. He retired from HISD in July 2010 to fulfill a lifelong dream of working in Major League Baseball and for his hometown team, the Houston Astros.

“I dreamed of playing professional baseball,” Wade said. “I became athletic director after being an assistant principal. The principal asked me and I couldn’t say no. I’m grateful. I wouldn’t be where I am today without that opportunity.”

During Wade’s tenure with the Houston Astros, he and his youth academy staff have assisted over 250 athletes in obtaining college baseball and softball opportunities along with seven young men drafted by MLB teams.

“The Astros Youth Academy formed in 2005 because kids of color were not getting into major league baseball because of grades. Through the academy, we help get them in D-1 schools. Everything we do is free. We don’t charge a dime. We pay for uniforms, travel, hotels. There are about seven others around the country but we were the first,” Wade said. “Owner (Jim) Crane is very supportive. We never have to ask for a thing.”

Wade spoke about several of the academy’s programs—the Community Leagues Program which provides maintenance of fields as well as the purchase of uniforms for the community; the RBI League which allows kids to play competitively; and the Fun At Bat Program which is an entry-level program for elementary age kids in which the academy provides books and equipment to approximately 30,000 elementary kids in the Houston area.

“I want to do that for Livingston. I want us to give books and equipment to LISD for the elementary kids,” he said.

Wade was appointed by Texas Education Commissioner Dr. Robert Scott in 2010 to serve on the Texas University Interscholastic League State Executive Board and continues to serve in this capacity. This board is the highest judicial body of the U.I.L. and determines all final athletic eligibility appeals. He also serves on the board of the Houston Area Urban League, Houston Methodist Hospital Brain and Bone Collaborative and the Houston Touchdown Club.

He is married to his best friend, Euletha, an associate vice president at Prairieview A&M University. They have four children, all of whom are college graduates.