A partnership between the Polk County Sheriff’s Department and The Coalition Inc., of Lufkin, a substance abuse prevention organization å to prevent underage drinking, tobacco/e-cigarette use and prescription drug misuse in East Texas, has recently proven successful.

The Polk County Sheriff’s Department targeted area businesses that sell tobacco. The age limit to purchase tobacco products, including e-cigarettes, is now 21, per the new guidelines from the U.S. Food & Drug Administration.

Out of the 69 attempts done in June and August, 9 citations were issued to the following businesses that sold tobacco products, including e-cigarettes, to minors:

“We commend those businesses who did not sell tobacco products to minors in our community. The Coalition and the Polk County Sheriff’s Department thank all of these stores for protecting the youth of Polk County from the dangers of tobacco and nicotine,” a spokesperson for The Coalition Inc. said.

For a complete list of those businesses that were under compliance, please visit The Coalition’s Facebook page @thecoalition936 or contact The Coalition at 936-634-9308 for more information 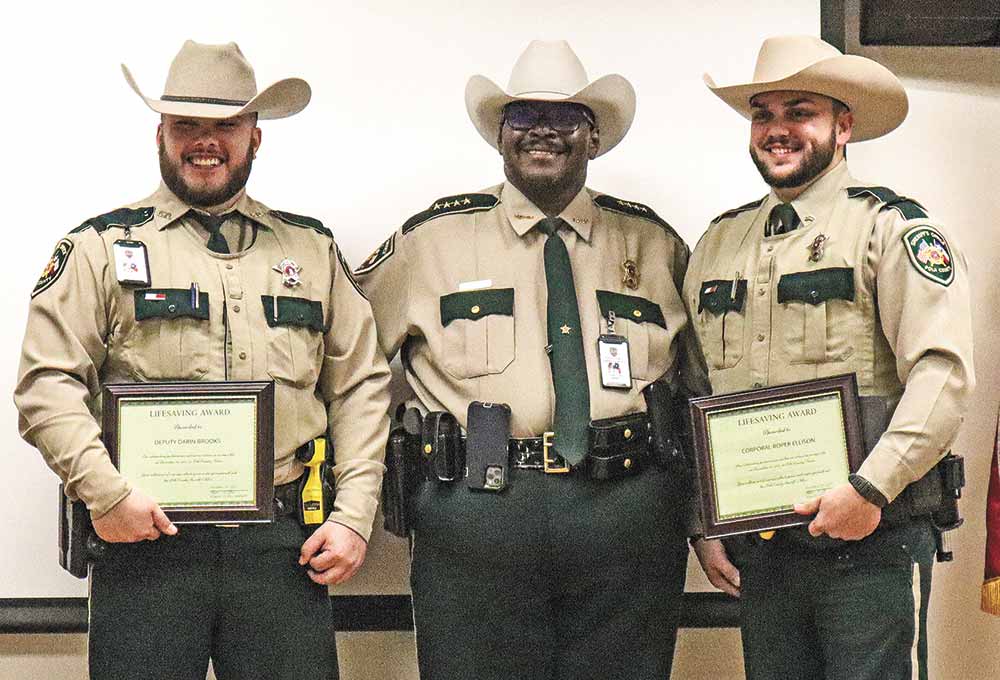 Polk County Sheriff Byron Lyons recognized Corporal Roper Ellison and Deputy Darin Brooks for saving a man from his burning home, presenting them with heroism and bravery awards, during a moving ceremony Dec. 22.

On the morning of Dec. 19, dispatch received a call that a residence in the 400 block of Don Reily Drag in Wiggins Village No. 2 was on fire and that the homeowner, who was disabled and in a wheelchair, had made it to the front porch but could not exit the residence which was fully engulfed.

“It was a large fire and they stepped out of the vehicle and ran into the house on fire,” Lyons said.

Both men ran into the fire with Ellison physically picking up the homeowner and carrying him from the fire and Brooks ensuring that both his partner and the homeowner made it to safety.

“I am a very proud sheriff. I’m honored to stand here today and talk about the bravery and courage these men displayed last Sunday. These guys get out of bed, leave their wives and kids, not knowing if they’ll return to their homes at the end of the day,” Lyons said.

“I was listening to this on the radio. They were on point. They were taking care of business. First, the hair on the back of your neck stood up and then the tears flowed. This is selflessness, courage, honor,” Lyons said.

The sheriff cited the General Norman Schwarzkopf quote about courage, “True courage is being afraid, and going ahead and doing your job anyhow, that’s what courage is.”

Lyons played the video from the dash cam for those attending the ceremony. He said that just 20 seconds later the entire porch was engulfed.

“A lot of times we’re left out, but law enforcement officers are heroes. They stepped out on faith when they exited that vehicle to save a life they didn’t know. Heroes wear a badge,” Lyons said, adding, “Both had other careers before they came into law enforcement, but they both had the zeal that they wanted to serve their community.

“It tugs on your heartstrings a little bit,” Lyons said. A subject wanted in connection with the shooting of an 11-year-old girl Sunday has turned himself in to the Polk County Sheriff’s Office but has not been charged.

The Polk County Sheriff’s Office received a 911 call from the 2500 block of FM 1988 around 2 a.m. Sunday that someone had shot into the residence. Deputies arrived at the scene and found that an 11-year-old female who was asleep in bed had been shot.

The sheriff’s office initially sought assistance in locating a person of interest named Avery Norman who was possibly driving either a black Dodge or a black older-model four-door Acura. Norman turned himself in but no charges had been filed as of press time.

Lyons said the child is expected to make a complete recovery. Peggy Sue Simmons, 63 of Livingston, has been charged with murder in conjunction with the death of her brother, Aaron Earl Figgs, 67 of Leggett.

Detectives with the Polk County Sheriff’s Office Criminal Investigation Division responded to Figgs’ home at approximately 9:40 p.m. on Dec. 6. Upon arrival, detectives discovered Figgs deceased in his bed, with evidence of possible foul play. Simmons was at the house at the time of Figgs’ death and was interviewed by detectives at the scene.

Detectives attended the autopsy of Figgs the following morning at the Jefferson County Medical Examiner’s Office where it was determined that he died from an injury sustained by an event which caused him to bleed to death.

With sufficient probable cause, detectives obtained an arrest warrant on Dec. 22 charging Simmons with murder. She was subsequently arrested at the Pardon and Parole Office in Huntsville and transported to the Walker County Jail. She was on parole for unrelated events and her parole was revoked at that time.

“I’d like to express my gratitude for the hard work and professionalism displayed by the criminal investigation division, along with the Polk County District Attorney’s Office and the Jefferson County Medical Examiner’s Office. Their hard work collectively brought justice for Mr. Aaron Earl Figgs and his family,” Sheriff Byron Lyons said.