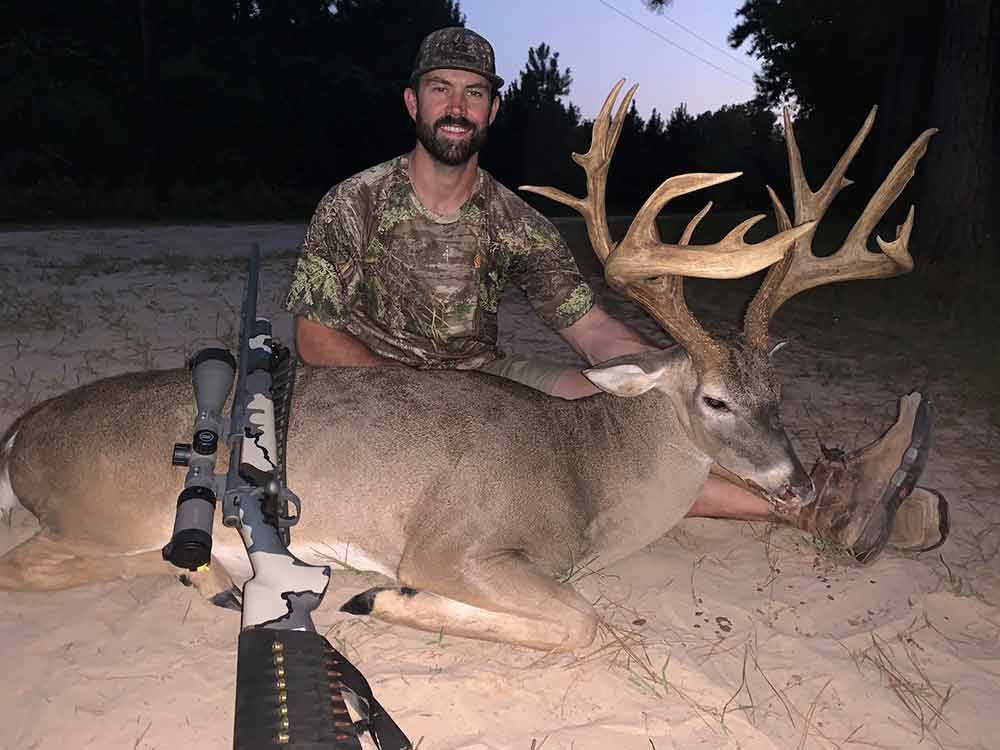 Joel Colston of Livingston got an early jump on the general deer season that kicked off Nov. 6 and it paid off with a remarkable  whitetail wearing a magnificent crown.

Texas Big Awards Program scorer Erik Van Dorn of Huntsville taped the 18-pointer at 199 3/8 gross using the Boone and Crockett measuring system. The enormous rack nets 190 2/8 after deducts for a lack of symmetry between the two antlers. It’s currently the best free ranging TBGA non-typical reported from the Pineywoods region this year.

There are plenty of good lessons ambitious deer managers can learn from Colston’s whopper.

For starters, it clearly shows what can happen when like-minded hunters keep those itchy trigger fingers in check and let the young guys walk.

The deer also illustrates the benefits of feeding protein and other nutritious goodies through the off-season to fuel new antler growth after the previous year’s antlers are cast.

Colston hunts on a 1,600-acre club he shares with six other members in Trinity County. He said the outfit has operated under the guidelines of the Texas Parks and Wildlife Department’s Conservation Level Managed Lands Deer Program (MLDP) for nearly two decades.

MLD Conservation Level clubs pay an annual fee to TPWD in exchange for the opportunity work with a state wildlife biologist towards developing habitat and harvest recommendations tailored towards meeting deer management goals for specific properties.

Program participants are required to maintain accurate harvest data and to satisfy prescribed habitat management practices from one year to the next.

MLD hunters are rewarded for the good deeds with some pretty sweet perks. Among them are greater flexibility in managing their deer herds by allowing for extended hunting seasons and harvest quotas that are significantly more lenient than those granted during the regular season framework under county-specific guidelines.

This year, MLD clubs statewide were allowed to begin hunting with rifles at the start the Archery Only season, Oct. 2. That’s how Colston wound up in a box blind a week later with a 6.5 Creedmoor across his lap.

He was hoping for an afternoon date with “Triple Crown.” And he got it.

Colston said he and his hunting buddies tagged the buck with the catchy nickname because of the unique cluster of points that sprouted from its G2s.

“He’s a really cool-looking buck,” said Colston. “I don’t know that I’ll ever be able to top him — not on free range in East Texas, anyway.”

Colston’s relationship with the manly-looking whitetail dates back to   2019, when a promising young 10 pointer began showing up on game cameras positioned at protein stations and corn feeders at all corners of the property.

Colston said the young buck may have scored around 125 B&C at the time.

“He traveled all over the whole lease,” he recalled. “Everybody saw him. You never knew where he was going to be.”

The hunter believed the buck to be only 2 1/2 years old at the time. He described it as a main frame 8 pointer with two kickers that plenty of hunters would have shot if given the opportunity.

But not on Colston’s lease. Growing quality bucks is the name of the game there.

Club members are well-schooled on field judging whitetails and they are restricted to tight guidelines when it comes to pulling the trigger, particularly on bucks that display the potential Triple Crown did at such a young age.

According to Colston, hunters on his lease are allowed one “trophy” buck per season. To qualify, deer must be at least 4 1/2 years old with a minimum gross score of 140 B&C.

Amazingly, Triple Crown’s headgear exploded ahead of the 2020 season, easily stacking on about 30-35 inches in mass, tine and beam length.

Colston said he watched the 3 1/2-year old deer for an hour at one of his feeders on opening day last October. He counted 14 points and estimated the buck to score in the mid-160s.

Colston showed video of the outstanding buck to other members and everyone agreed on the buck’s age. Likewise, they elected to give him another year to grow.

“We knew it was risky to do that, because we’ve got some neighbors around us that we’ve lost a lot of good deer to over the years,” Colston said. “All we could do was hope he didn’t leave and get shot. Luckily, he never left our club last season. If he did, it wasn’t for very long.”

Colston said the buck shed its antlers last March and didn’t show up again on camera until around mid-July, about four months into the 2021 antler-growing season.

Club members were shocked by what they saw in the massive buck that everyone believed to be no more than 4 1/2 years old.

“He really blew up this year,” Colston said. “We were all in disbelief that it was him, but there was no doubt about it. It’s spooky to think what this deer may turned into with another year or two of age, but we all knew that we couldn’t take that chance. Everyone agreed that whoever got the opportunity should go ahead and shoot him.”

A Date with Triple Crown

Several club members got pictures of the buck throughout the summer, most coming under the cover of darkness. Colston said he collected one daylight photo of the deer the week before the Oct. 2 MLD season opener, but never actually laid eyes on the animal this fall until a magical sunset fell on Trinity County on Oct. 9.

The hunter said he was watching a group of deer about 150 yards away when he turned to check an adjacent road that leads to his stand. That’s when he saw an incredible buck with tall, gnarly antlers resembling something straight out of a fairy tale book.

“He was just standing there staring at me, about 80 yards away,” he said.

Colston didn’t have to think twice about reaching for his rifle, but it took a few seconds to ready for the shot. In the meantime, Triple Crown peeled off the road and headed into the adjacent clearcut.

Lucky for Coltson, the buck checked up before melting into the thick brush.

“I have no idea why he stopped, but it gave me just enough time to make the shot,” he said. “Everything worked out perfect.”

Matt Williams is a freelance writer based in Nacogdoches. He can be reached by e-mail, This email address is being protected from spambots. You need JavaScript enabled to view it.