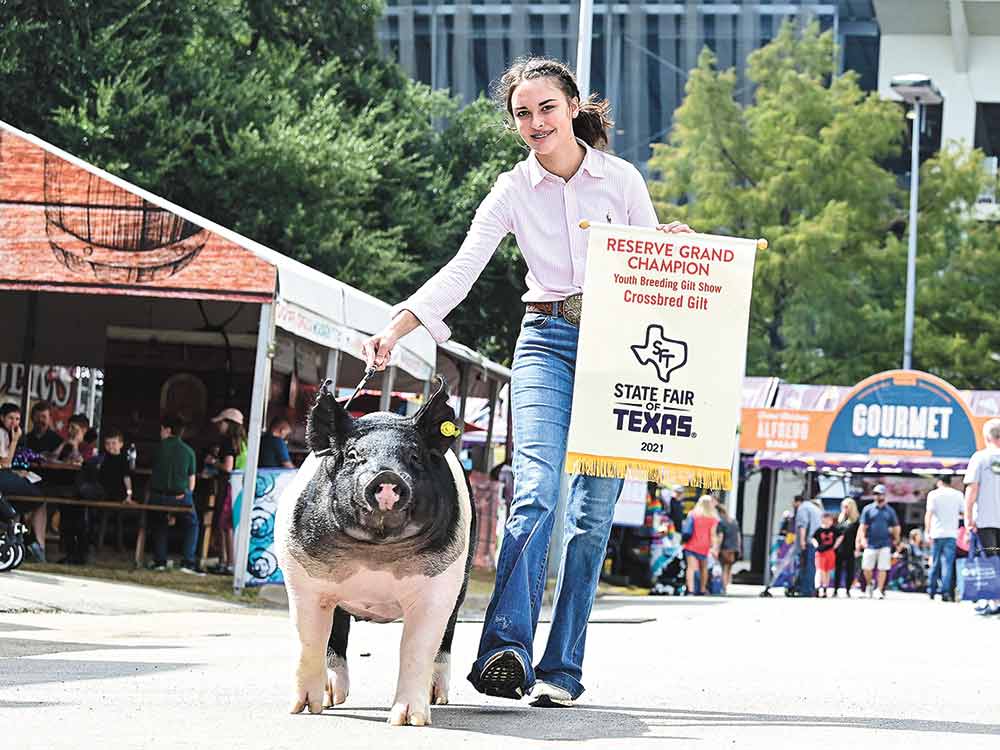 Many children raising livestock in Texas dream of winning an award in Dallas at the state fair. Livingston High School’s Halle Hawkins enjoyed the experience just a few weeks ago — with three different animals.

Halle has been showing pigs since she was in the third grade at 8 years of age. She spends an average of 27 hours per week with the pigs, making sure each are washed, exercised and stalls are cleaned. Each pig — she currently has seven — is walked a half-mile every day.

Missy, Kodak and Vontae Mack, were purchased in May, approximately six weeks after they were born and weighing around 20-25 pounds.

She and her father, Livingston Superintendent Dr. Brent Hawkins, have traveled thousands of miles to find just the right animals. There are some who purchase pigs for up to $50,000, but Halle and her father instead travel across several states to find the one right for them at a cheaper rate.

“Some of these pigs, we have to work extra hard for them, because we don’t spend the money some people spend,” Dr. Hawkins said. “Some of the ones that she beat in the breed were $20,000.”

Just taking care of a pig can get pricey, as they eat a $40 bag of feed about once a week. Some pigs at shows have more extravagant ways of reaching the fairs than others, arriving in $100,000 trailers. 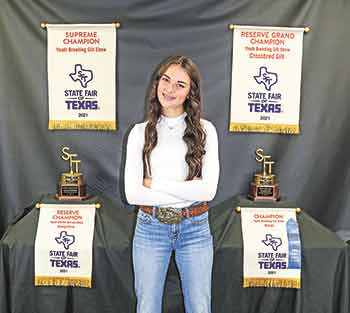 Halle has been showing pigs since she was in the third grade at 8 years of age. Courtesy photosHowever, the Hawkins clan paid a relative bargain price at $500 for the supreme champion, while the other two came at costs of $500 and $1,700. Dr. Hawkins said Halle is attempting to raise champions, not buy them.

There are many features to finding the right pig that include the animal being structurally sound with feet and legs hitting the ground correctly when they walk, good skin and hair with long necks, big legs and a wide, flat back.

“We start taming them down in the pen, getting them used to us,” Halle said of the work once she has the next potential winner. “At 75-100 pounds, I start working with them. There are some that take a little more work than usual.”

Halle competes against hundreds and sometimes thousands of contestants in shows. She is also judged on how well the animal is presented.

She had a good feeling about the three recent champions and their chances.

“I wouldn’t say special, but they were on up there. I had a special bond with Vontae and Missy. Vontae and Kodak come from Dalhart, Texas, and Missy came from Oklahoma City.”

Kodak and Missy were both leased and have been returned to their owners to breed. Vontae was purchased and later sold after winning.

Scholarship money is the big reward for her accolades at the state fair. Though she is not sure how much it will be, hard work over the years has allowed the sophomore to accumulate around $10,000 in school funds already.

It is believed that no one has ever won three such awards that Halle did at the state fair. She is also thought to be the first winner of a Texas livestock major in the district.

The next show in a few weeks will be in Louisville, Kentucky, where Halle and a new group of four-legged friends will compete at the national level.