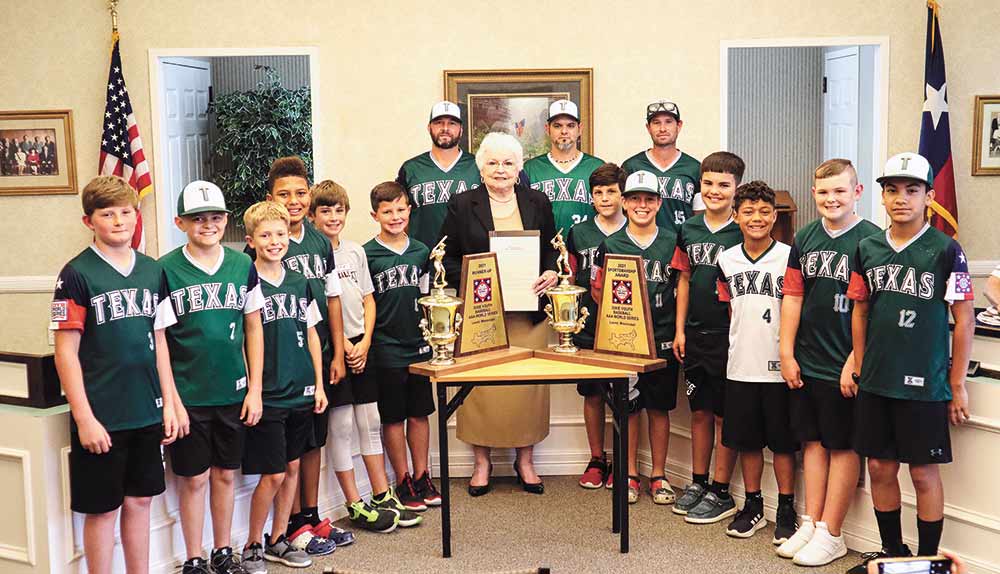 The Livingston 10U team finished the season as runners up in the Dixie League World Series in Laurel, Miss. in August and was recognized by the Livingston City Council during its regular meeting Tuesday. Photo by Emily Banks Wooten

The Livingston 10U team that finished the season as runners up in the Dixie League World Series in Laurel, Miss. in August was recognized by the Livingston City Council during its regular meeting Tuesday.

With the city having received a proclamation from State Representative James White recognizing the team’s achievement, Mayor Judy Cochran took the opportunity to invite the team and their parents so that she could congratulate them and present the proclamation on White’s behalf.

Having won state three years in a row, the team defeated Louisiana 15-5 and dropped the final game 6-5 to Alabama. However, it is worth noting that the boys were awarded the sportsmanship award at the conclusion of the World Series.

“Basically, we’re trying to plan for the future. We know it’s coming so we’re trying to prepare for it,” Wiggins said. “We’ll increase the lines starting at Abbey Street and going down South Washington.”

Council approved the re-appointment of Cochran and Alderman Clarke Evans to the Board of Directors of the Sam Rayburn Municipal Power Agency (SRMPA) for the 2021-2023 term. SRMPA supplies electrical power to the city, along with the cities of Liberty and Jasper. The board comprises two directors from each of the three member cities.

The annual firefighting agreement between the City of Livingston and Polk County for the fiscal year beginning October 1 and ending September 30 was approved. Through the agreement, the Livingston Volunteer Fire Department will receive $49,296.62 from the county, a 19% increase over last year’s agreement.

“I’d like to see a more equitable solution in the future,” Alderman Alan Cook said. “The value of the structures and property has gone up exponentially and the cost of firefighting has increased considerably while the method of formulating has remained stagnant. During some ensuing discussion, it was revealed that while the county contributes a pro-rata share to each fire department in the county, it is not listed as a line item in the county’s budget.

“It needs to be addressed. You need to be a line item,” Wiggins said.

Wiggins updated Council and those present that the October sales tax from the State Comptroller’s Office reflected $349,843.50 for the month of August, a 3.95% increase from the previous year.

Regarding demolitions and restorations, Wiggins said that work on the Heritage Society’s log cabin is in progress with Patrick Swilley as contractor. A public hearing was held September 4 on the former Burmont Nursing Home at 154 Banks Drive. Council approved the order for demolition and cleanup of the property through an order of abatement within 45 days. That order expires October 26.

Other business included approval of the accounts over $500 and the minutes of the September 14 meeting.