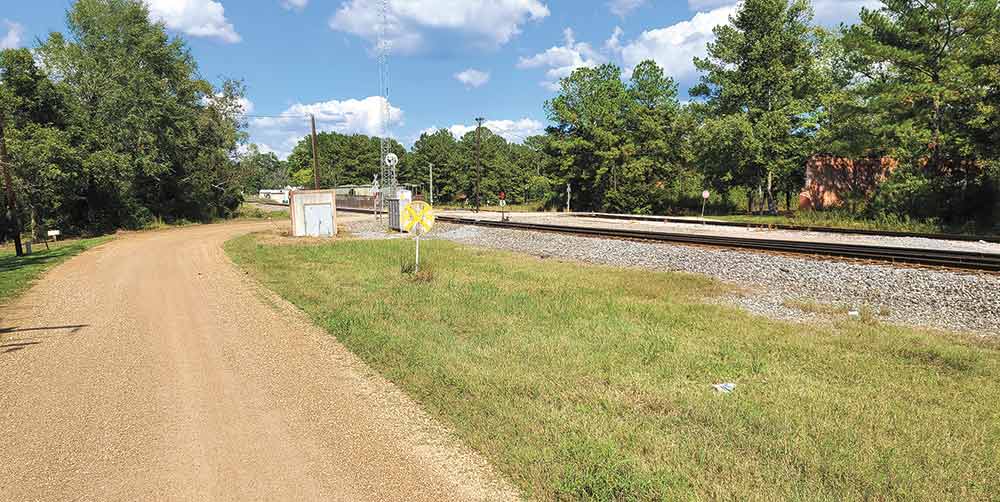 This is the only crossing for Glover Road, also known as Old Highway 35 North. Photos by Brian Besch

Getting to and from home has, at times, been difficult for those living on Glover Road in Leggett the past 30 years. The one-mile stretch has homes on around 16 different plots of land.

Glover Road, also known as Old Highway 35 North, is next to the train tracks that run parallel to Highway 59 in Leggett. The problem is that the road dead ends and there is only one crossing to reach Highway 59 or any other road. Residents remember a time when there was a second crossing and many are hopeful that will again be the case in the future.

“My daughter and my nephew are the only ones that go to Leggett (ISD) on this road because there are a lot of elderly people that live here. I told my husband about a week ago that someone is going to have an emergency out here and they (emergency responders) are not going to be able to get to them. Sure enough, it was my son that had the emergency. It is a terrible thing, and seconds and minutes mean the most when you are not breathing. I needed them.” 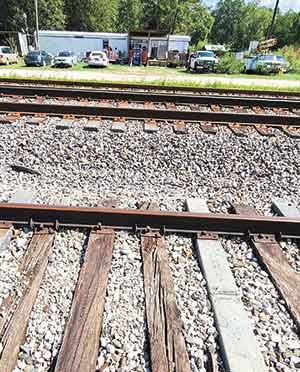 These are the wooden planks where paramedics and Monica Franklin performed CPR on K’Twon. A train was on the middle track and blocking the only crossing.The tragic story told by Monica Franklin is an example of why many want the second crossing. Reportedly, trains stop on the tracks for an hour and up to three hours at a time, blocking any vehicles from getting in or going out.

“It was the (Sept.) 30th when this happened and I woke up and found my son not breathing,” Franklin said. I immediately started CPR and my husband called 911. It was about 7:30 a.m. or 8 a.m. maybe when we called 911 and the train was on the track at the time.”

She said 30 minutes before, her 3-month-old baby, K’Twon, had been given a bottle and put down to rest. The baby’s hands were very active and he had a habit of pulling the blanket to his face. Franklin, a nurse, said K’Twon was not stiff or cold to the touch, but she could tell that something wasn’t right when she picked him up and he was non-responsive. She immediately checked for a pulse and then began CPR.

“I was doing CPR on my son on the washing machine for an hour,” Franklin said. “The woman on dispatch told me that there was a train on the track and ‘they can’t get to you.’ I don’t know how many rounds of CPR I did on my son, I just kept going. Eventually, the EMTs came through the train cars to get to me, but they did not bring any equipment with them. As the paramedics came into my home, we did a few more rounds of CPR and they said ‘let’s get him to the ambulance.’ We ran to the train track to crawl back through the train cars and get him to the ambulance, because they (sheriff’s office, ambulance) were stuck on the other side of the track. The train began to start. We ended up doing CPR on the railroad track until the train had passed. Me and the paramedic were doing CPR on the train tracks while the train passed for what seems like forever.”

Franklin said once the train cleared, they were able to get K’Twon to the ambulance and he was transported to St. Luke’s Health Memorial Hospital. They were able to regain a heartbeat, however, he was not breathing on his own. He was then airlifted to Children’s Memorial Hermann Hospital in Houston and there for two days on life support. Tests showed that his brain did not make it through the trauma. K’Twon was said to be without oxygen for too long and life support was removed Saturday.

“It is just hurtful and if it was anyone else’s family, I would feel the same way,” Franklin said. “I have been told of so many instances that have happened on this road. This is every day of the week, it seems like. I’m a nurse, but I was a stay-at-home mom until two or three weeks ago, when I went back to work. This train holds up our daughter from school and in the afternoon. It’s not like they are hooking up cars and stay on the track for 30 minutes or so. It is literally hours. I have missed a dentist appointment, because for four hours, they were sitting on the track. The thing is, they pull past the main road back there by the store, but they block us by two to three cars. The train that was there the day my son passed was a long train. The majority of the time, it is by two to three cars. I am not sure what goes on with their operations, but I know me and my husband have made over 20 complaints to Union Pacific. The only thing they tell me is that they will contact their supervisor or management.”

Franklin said her 5-year-old daughter attending kindergarten is usually one of the first to get off the bus. Yet, when a train is on the track, the bus will park for a few minutes and then finish the route before dropping her off.

Franklin moved to Leggett on family property from Texarkana early in 2021. Through conversations, she that Leggett ISD has made several reports to Union Pacific over the years.

Polk County Judge Sydney Murphy also has made numerous complaints to Union Pacific. Both she and Leggett ISD superintendent Jana Lowe feel as though their questions and complaints have fallen on deaf ears.

“I have been after U.P. about this crossing for several years” Murphy said. “My worst nightmare just came true. They have been non-responsive. We have no idea if they have made any plans, evaluated the situation, or even reviewed it any further. Our last communication with them was September-October of 2019, when they promised they would come meet with (Polk County Commissioner) Milt Purvis about the issue.”

Murphy explained that the replies she is given include that the company will look into it or evaluate the situation or that the person she spoke with previously is no longer there. The responses have delayed any sort of action. Purvis had discussed the issue with them prior to Murphy taking office.

Lowe said she reports to Union Pacific’s website once or twice each week about a problem in the area.

“I can’t even count how many times in the morning I will come and there has been a 20- or 30-minute wait,” the Leggett superintendent said. “I don’t know if that is acceptable or not. When you have kids on the other side in the bus, especially whenever they are little kids going home — we waited from 3:30 p.m. until nearly 5 p.m. — that is a bathroom issue. Not to mention a behavior issue for little kids to stay that long.”

Blocking FM 942 is also a normal occurrence, according to Lowe. The obstruction there is said to usually be around 20 or 30 minutes and usually around 7:15 p.m.

“I reported every time and I have never once been contacted by anyone,” Lowe said. “I am just extremely frustrated by it and I think it is a dangerous situation. I think it is ridiculous that they don’t take any notice of completely blocking the only route those people have out. I feel so sorry for those people and I just can’t imagine having a child that was affected to the extent that they ended up losing a child because they can’t get an emergency person down there. I feel like this is one of those situations, and I am not throwing rocks at a major industry, but if that were blocking homes in The Woodlands, I guarantee you that there would be a crossing. But in Leggett, Texas, it is like, ‘eh, they have reported it a few times,’ and that offends me. We just need some sort of communication with the railroad, but good luck trying to find it.”

There is a fear amongst many on Glover Road that a similar emergency could occur again. There have been multiple house fires with older homes on the road. There are also many senior citizens that live in the area, including a mobile home park for those aged 55 and over.

The Enterprise obtained a letter written by W.T. “Pete” Glover from Feb. of 1992. The man for which the road is named was concerned then of the three-hour delays and how it was “very unreasonable, when there is no other outlet.”

“We could probably drive around and wait and miss our appointments and miss our school and that kind of thing. That is easy stuff to get by, but when you have a life-threatening emergency and nobody can get to you, those are the things that are very concerning,” Franklin said. “I have been late to work due to this train. I work for agencies and we have a nurse rating. If you are late or you have to call for your shift, your nurse rating goes down and we can’t pick up more shifts. There are only so many shifts you can pick up at a time. That is where I am at now. I am not able to work as many hours now because my rating went down.”

A memorial service will be held both locally and in Texarkana, but times and dates have yet to be determined. A bank account has been established in K’Twon’s name at First National Bank. The location where donations will be accepted is 308 West Church Street in Livingston. Checks can be written “For Benefit of Baby Franklin.”