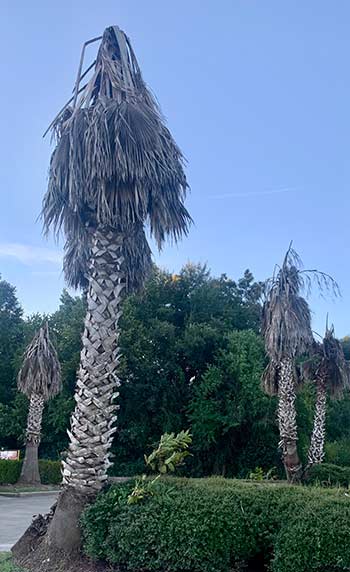 One of the most immediate and obvious signs of the damage done by Winter Storm Uri was seen on all the palm trees planted around East Texas. None of their palm branches survived. by Adam Conway

Winter Storm Uri was an unusual and devastating weather phenomenon that not only damaged the lives of people in East Texas, but also the plant life that inhabits the state. “Severe freeze damage and even death to immature large trees or shrubs was caused to Fan-Tex ash trees, small live oaks and Wax Myrtles, Italian Cypress, some species of palms and immature Slash and Loblolly pines,” said Brenda Swagerty, General Manager of Plants of Texas. “To help insulate our crops for the impending storm, our company spent three days prior to the storm irrigating all crops up to two times a day in order to insulate the roots, stems and foliage of all plants and trees by filling them with water.”

Swagerty explained that East Texans can prevent damage to their plants and trees by watering early and often when a winter storm is approaching. “Be mindful when covering plants by using lightweight materials such as frost cloth,” she said.  “It is important to ensure that plants are secured to the ground and no airgaps are present between the cloth and the ground, so heat does not escape, and cold air does not enter. If heavy snow or ice builds up on the covering, knock it off as soon as possible to reduce limb breakage.”

Many people think Winter Storm Uri was a somewhat random storm, with the last similarly low temperatures occurring decades ago. However, several climatologists believe that storms like Uri will happen more often and more severely due to gradual increases in global temperatures affecting the jet stream and the way hot and cold air moves throughout the Earth. Either way, there will be more damaging winter weather in the future. Although many plants can survive harsh winter conditions, such as Black-eyed Susan, Japanese Maple and most species of Holly, it is important to take the proper precautions for cold-sensitive plant life to prepare for the next “Snowpocalypse.”