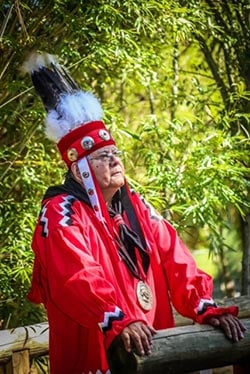 Herbert G. Johnson Sr., Principal Chief of the Alabama-Coushatta Tribe of Texas, died Monday after a brief hospital stay. He was 79 years old and had served as Mikko Choba Skalaaba since Jan. 1, 2020.

“It is with profound sadness that the Tribal Council of the Alabama-Coushatta Tribe of Texas reports that the Tribe’s Mikko Choba Skaalaba passed away,” Debrina Sylestine-Dirden, the Tribe’s communications director, said.

A member of the Beaver Clan, Johnson served his people in many capacities throughout his entire life. He was twice elected to the Tribal Council and worked as the Tribal security director for over 21 years. He was elected as the Tribe’s Second Chief following the passing of the then-Principal Chief—Mikko Colabe III—the late Clem Sylestine in 2019. A deacon and elder at the Indian Presbyterian Church, Johnson also served on the Big Sandy ISD Board of Trustees for 48 years.

Johnson was born on April 3, 1942 on the Alabama-Coushatta Tribe of Texas Indian Reservation near Livingston. After high school, Johnson enrolled at Jacksonville College. A Jacksonville College legend, he earned All-American status in basketball following the 1963 season. Although he stood only 5 feet, 6 inches tall, he set a then all-time national record when he scored 67 points in a single game. He went on to average 33.5 points a game for the season in an era that did not feature a three-point shot. Jacksonville College honored Johnson as a Distinguished Alumnus in 2020. Johnson also attended the University of Houston and played for Coach Guy V. Lewis for one year.

When asked by the Smithsonian National Museum of American Indians what message he would like to share with Tribal youth, Johnson stated, “Our future lies with you. Choose a good path, follow it and fulfill your dreams. Keep your traditions alive. Make good choices. Always stay positive and make a difference.”

“Our Mikko Choba Skaalaba was an inspiration for us all,” Tribal Chairperson Nita Battise said. “He was always respectful of all people and listened carefully before forming a decision. His leadership and guidance were a great asset to the Tribe and he will be deeply missed.”

The Alabama-Coushatta Tribe will be observing a period of mourning.