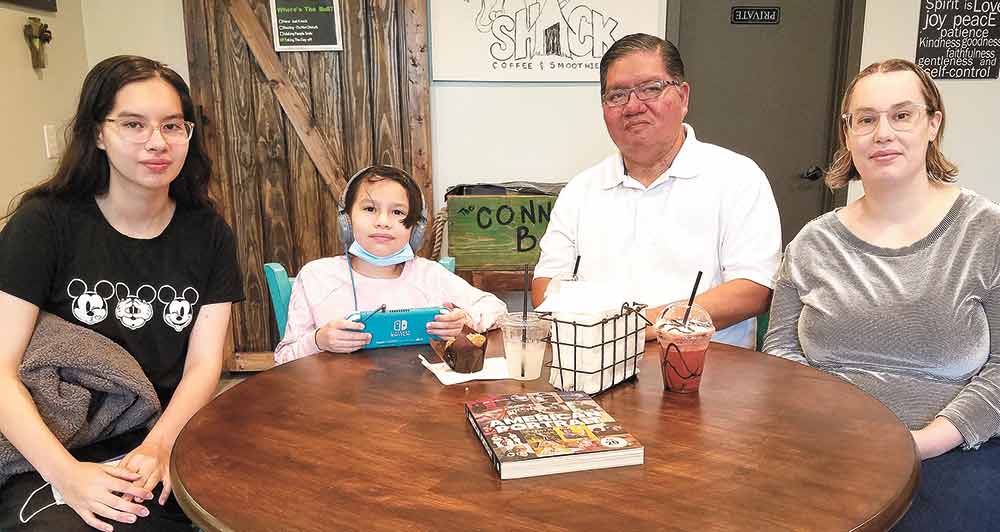 The Johnson family¬—Aaliyah, 14, Stormi, 8, Herb Jr. and Victoria—celebrate Aaliyah’s and Victoria’s inclusion in the newly released PBS book “American Portrait: The Story of Us, Told by Us.” Both women shared about their creative pursuits in the book. The Johnsons are residents of the Alabama-Coushatta Indian Reservation. Photo by Emily Banks Wooten

The talents and interests of a mother and daughter from the Alabama-Coushatta Indian Reservation were spotlighted when they were both featured in an ambitious storytelling project conducted by the Public Broadcasting Service, or PBS as it’s more commonly known.

In January 2020, in celebration of its 50th anniversary, PBS launched the storytelling project, American Portrait, inviting people across the country to participate in a national conversation about what it means to be an American today.

The result is “American Portrait: The Story of Us, Told by Us,” a beautiful book that not only captures the tumultuous, historic year that was 2020, but also reminds us that everyone has a story.

Victoria Johnson, a photographer, and her daughter Aaliyah, a 14-year-old Big Sandy ISD student who’s into art and comedy, learned about the project through Native Hoop Magazine, a Native American publication they’ve contributed to monthly for the past five years that was promoting the PBS project.

A snapshot of the people that comprise America, the book features more than 400 entries and photographs, all of which began with an answer to a prompt: 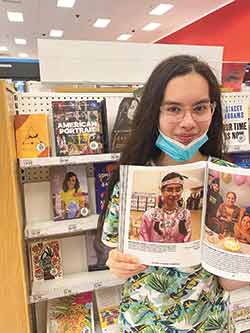 Aaliyah Johnson, 14, an incoming ninth-grader at Big Sandy High School, shows off her picture in the newly released PBS book “American Portrait: The Story of Us, Told by Us.” Both Aaliyah and her mother submitted entries that were included in the book. Courtesy photoVictoria and Aaliyah both selected the prompt, “My American dream is…”

This is Victoria’s submission: “My American dream is to continue what I have loved since I was nine years old and that is photography. My name is Victoria and this is just a piece of my story. It started as a hobby and more recently has become my business. It will forever be my love and my passion. It started as a gift passed down from my late father who also loved photography and enjoyed it as a hobby a good number of years of his life. I want to remain humble throughout the entire process. I have met some incredible people throughout my journey. Both photographers and non-photographers alike. I have had the enjoyment of seeing several of my images published. Documenting Native American dancers at powwows is a favorite of mine as both of my daughters are dancers. Always remember to keep going and to never give up on your dreams!”

“I was probably about nine years old when I got my first point and shoot camera. My late father was a photographer as a hobby. I got my first professional camera in 2014 and after a few years decided to start the family business, SkyeBreese Photography,” Victoria said of the business that derives its name from the combination of her two daughters’ middle names.

“The paying part is mostly portraits, family sessions, events,” Victoria said, adding, “I do enjoy other kinds. I like street photography, landscapes. I think the biggest thing for sure is Native American photography.”

Victoria’s photography has appeared in other publications, as well as in a street photography showcase in San Antonio called Urban Grind Vol. 2 and an exhibit at the fine art gallery at Lone Star College in Kingwood.

This is Aaliyah’s submission: “My American dream is to continue to pursue my art and comedy. My name is Aaliyah and I’m 13 years old. I’m an enrolled tribal citizen of the Alabama-Coushatta Tribe of Texas. I enjoy sketch drawing and posting my comedy videos. I like making people laugh. I also enjoy dancing with other Indigenous people at powwows!”

Aaliyah’s art and comedy are everything to her.

“What I do is mostly sketching. I prefer all-out sketching with pencil. I started about five years ago, just picked it up on my own. In fifth grade, my sketch was picked to be exhibited in the Houston Livestock Show & Rodeo Art Show,” Aaliyah said.

She also dabbles in photography and has been published in three magazines for kid photographers.

“My comedy is something I try to do regularly. It started when I stole a wig from my uncle that I found at his house in a bedroom. I just started doing stuff. Rolanda and Ricardo are the two characters,” Aaliyah said.

“The most embarrassing part is that some of my friends found it and my teacher played it in class,” Aaliyah said.

“She loves just making people laugh,” Victoria said of her daughter. “A comedian from another tribe, Moonie, reached out to her after seeing her YouTube channel.”

Aaliyah also participates in Southern Cloth Dancing, which is a slow dance of graceful movement that the women in the south do. When she was younger, she did Jingle, a northern-style dance that originated in the Ojibway Nation.

An incoming high school freshman, Aaliyah said she’d like to go to the Institute of American Indian Arts in Santa Fe, N.M. to continue her art after she graduates. 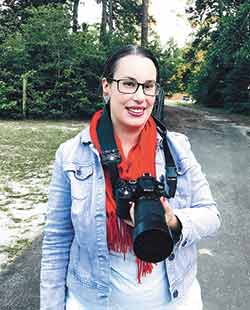 Influenced by her late father whose hobby was photography, Victoria Johnson has been interested in photography since she was nine years old. She purchased her first professional camera in 2014 and started the family business Skyebreese Photography. Her photographs have been published in multiple publications and shown in several exhibits. Courtesy photo“A producer contacted me regarding Aaliyah in November because she was a minor and they wanted to include her in the book. They said the book would be coming out June 22 of 2021,” Victoria said.

When asked when she found out that she, too, would be included in the book, Victoria and her husband, Herb Johnson Jr., both said simultaneously, “The day we bought it.”

It’s evident that Herb is very proud of his wife and daughters and rightfully so.

“The little one is following in the footsteps of her older sister with her art and both of them are self-taught,” Herb said, referring to Aaliyah’s little sister, Stormi, 8, who will start third grade soon.

Aaliyah and Stormi are the granddaughters of Herbert G. Johnson Sr., Mikko Choba, Chief Skalaba, the principal chief of the Alabama-Coushatta Tribe of Texas.

“Told by people of all ages, orientations, and walks of life, these unique stories of joy, adversity, love, sacrifice, grief, sharing, triumph, and grace, centered on the themes of family, work, fun, faith, and community, illuminate the struggles, hopes, dreams, and convictions of Americans today,” a promotion for the book states. 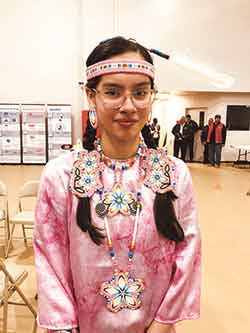 Aaliyah Johnson, 14, has participated in Native American dancing most of her life. She presently participates in Southern Cloth Dancing, which is a slow dance of graceful movement that the women in the south do. When she was younger, she did Jingle, a northern-style dance that originated in the Ojibway Nation. Courtesy photo“The more we share with our fellow citizens, the more we can see a real, complex and fascinating representation of our country that is far richer and deeper than headlines and elections tell us. As intriguing, thoughtful, and distinct as the nation it embodies, American Portrait is a photographic manifestation of Walt Whitman’s immortal words, ‘I am large. I contain multitudes’—and a vital and ultimately hopeful reminder that what we all share is much greater and enduring than what may divide us,” the promotion also states.