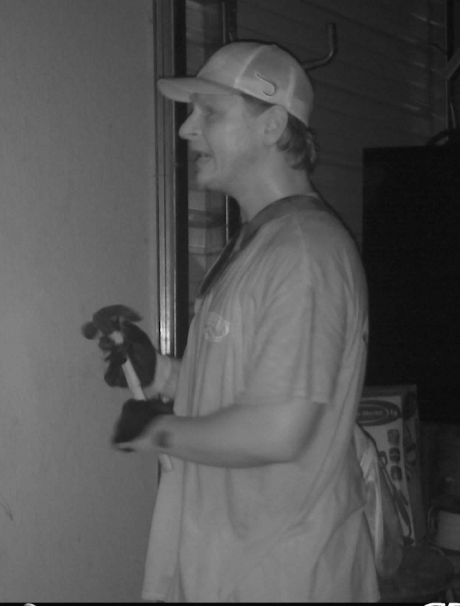 A burglar spotted in the act on security camera has been arrested, while another suspect remains at large.

The Polk County Sheriff's Office received a call Tuesday from a citizen who was alerted by his home security cameras. Two male subjects were inside a building on the victim’s property, located near Mangum Road.

The complainant provided an accurate description of the offenders as deputies responded to the area. Deputies and detectives quickly arrived on scene, located signs of forced entry into the building and observed several items of value placed by the door.

After conducting a search of the area, one of the suspects seen on the complainant's security camera was located and detained. He was immediately identified as Gary Eugene Penton, Jr. and found to be in possession of an item stolen from the complainant's property.

Penton, 47, of Livingston, was arrested without incident and booked into the Polk County Jail on the felony charge of burglary of a building.

Detectives are attempting to identify the other suspect involved in the burglary. The Polk County Sheriff's Office has requested the public view the two surveillance video photos of the second suspect involved.

If you recognize this suspect, or have information in this case or any other in Polk County, you are asked to submit a tip at p3tips.com, (the P3 App), or call Polk County Crime Stoppers at 936-327-STOP. Tipsters can remain anonymous and could collect a cash reward for information leading to an arrest. The Polk County Sheriff’s Office Criminal Investigation Division may also be contacted directly to speak with a detective at 936-327-6810.