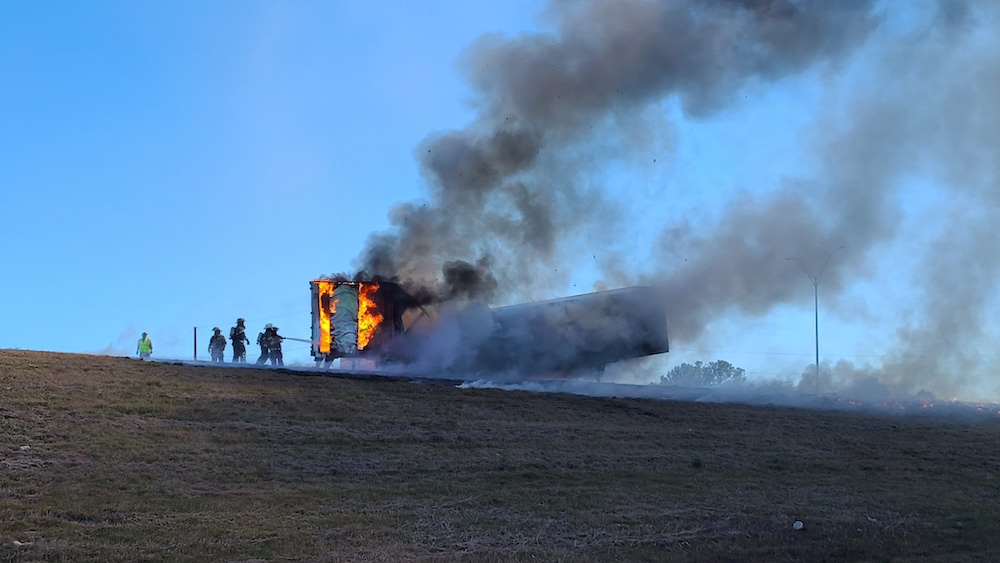 A large vehicle fire held traffic on the county's main thoroughfare for nearly an hour Monday.

After rear-trailer tandem brakes overheated and ignited, the tires of a tractor-trailer caught fire around 1:45 p.m. The vehicle's driver was able to unhook the trailer, as it burned on a Highway 59 overpass across from Livingston Junior High.

"All eight tires were involved and with all the heat, it caused the trailer to buckle," Livingston Fire Chief Corky Cochran said. "With all the tires on fire and some of the materials inside, it took a little time to get it all knocked out."

"The packaging burned and also some of the product as the heat intensified," Cochran said. "We were delayed just a couple of minutes researching what was in the truck before we made any fire control attempt. We needed to make sure it wasn't something that was water reactive. When we got those doors open, you could immediately see about a third of the way into the trailer."

Traffic was blocked for around 45 minutes to extinguish the blaze and a small grass fire that began nearby. Officers diverted traffic into downtown and the highway's feeder road.

Livingston also assisted the Corrigan Fire Department with nine firefighters and two trucks around 9:45 a.m. Saturday at a residence just off Highway 59.

On Collins Street, 11 Corrigan firefighters and three engines responded to the nearby house.

"It was pretty significant," Corrigan Fire Chief Jimmy McDonald said of the damage. "It's a total loss. It had a good jump on us before we ever got there. We were all in the truck headed to hand out some water that day to the area. The call dropped when we were all in the truck. We didn't even need an address because you could see the smoke when we pulled out of the station. It had been burning for a little bit before someone called."

No one was at the residence at the time of the fire and no injury was reported.

McDonald took over the Corrigan Fire Department about a year ago and has several new members. The chief said they are looking for others to join.

"We're always looking for people," he said. "Anybody interested in joining up can come by the fire station on Monday night at 6 p.m. and pick up an application."