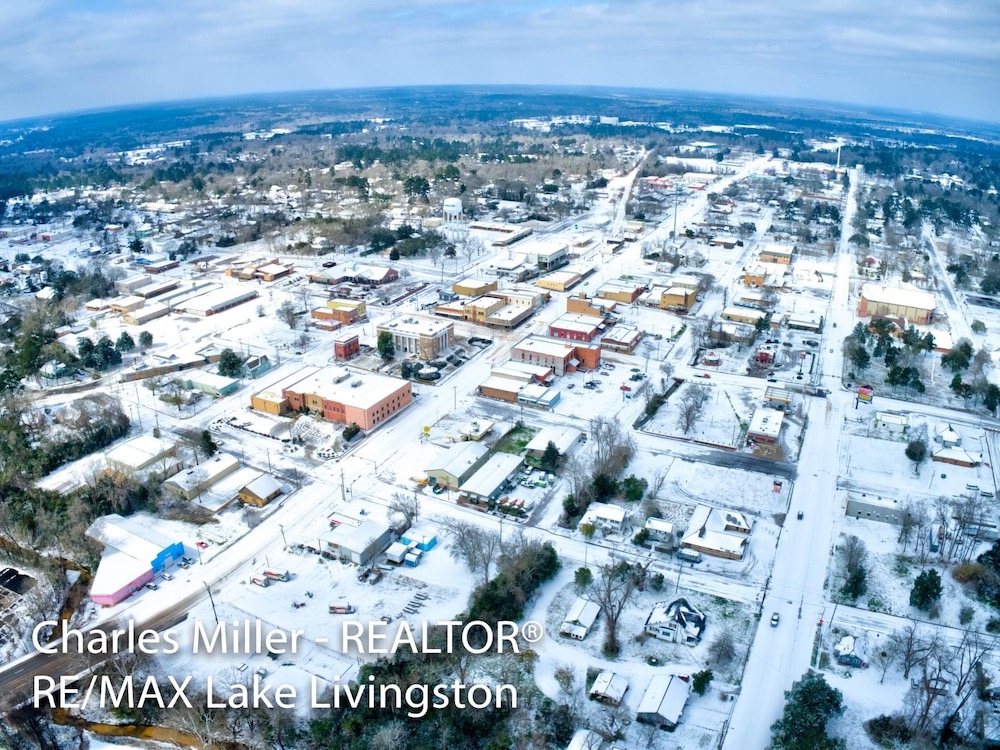 Photo by Charles Miller of RE/MAX Lake Livingston Arial footage of the city of Livingston depicts snowfall that covered the city and much of Polk County last Monday. The snowfall was the result of Winter Storm Uri, which made its presence last Sunday night and impacted the county much of the week.

While Uri forced several businesses to close for much of the week, the county’s biggest winter storm since 1996 didn’t do as much damage as anticipated. While there were power outages, frozen pipes, water main breaks and water shortages, there were no fatalities from automobile accidents or freezing/hypothermia.

“Power in Polk County was restored quickly,” Polk County Office of Emergency Management coordinator Courtney Comstock said. “Water is still an issue. We are advocating for our residents in trying to get information when their water will be restored. There are a lot of water main breaks. It also took a little while for utility companies to identify the leaks. Crews are working diligently to restore homes.”

Comstock said that power was restored fairly quickly after the storm. She said that SHECO (Sam Houston Electrical Cooperative) moved really quickly and Entergy resolved most of their outages Thursday.

According to Comstock, SHECO had 11,758 meters without power due to outages from the storm in Polk County between Monday and Tuesday, but as of Thursday, they were up and operational completely. She said Entergy had slightly less than 100 outages as of Thursday and now they have just one.

Uri made her mark Sunday night by bringing snow and freezing rain to the area. Snow continued through Monday night, and much of the county had to deal with icy road conditions until Thursday.

“This disaster is different because it impacted all 254 counties in the state of Texas,” Comstock said. “DPS reported eight vehicular accidents. First Responders had to pull some folks out of ditches as well. But there were no fatalities from accidents or freezing.”

Uri also forced the county’s six school districts – Big Sandy, Corrigan-Camden, Goodrich, Leggett, Livingston and Onalaska ISDs – to shut down for the entire week. All school district except Goodrich, which has a student holiday on Monday, are scheduled to return to the classroom on Monday.

Comstock said she expects some supplies in from Red Cross on Monday, and the Center of Hope provided meals and beverages to residents in need on Saturday. She also said that drinking water was expected to arrive this weekend, and that most restaurants are open to serve hungry citizens.

“Emergency Management has requested drinking water from the state,” Comstock said. “Residents have been directed to restaurants in Livingston because most have been operational in serving the past two days. We’ve been telling people to call local restaurants to ask if they have filters for their water so they can serve drinks. The state is getting ready to roll. I anticipate drinking water to arrive soon. When the water comes in, volunteer fire departments will distribute it. This helps with localized distribution.”

Comstock also said that Lifeline Church of Livingston helped by opening a warming shelter and managed to maintain power and water. The church also provides showers and laundry services at the facility.

Uri brought back memories for Comstock, a Livingston native. She compared it to another winter storm that took place a quarter of a century ago.

“The last ice storm that could be compared to this one happened in 1996,” Comstock said. “I was in elementary school when the winter storm of 1996 hit. I remember that we had thick ice and snow mix on the ground for three days. I don’t remember a long-term power outage then, but as a kid, I was excited to get out and play. Those were fun memories.”

Comstock said Uri was the first winter storm of this magnitude that she dealt with as coordinator of the OEM. This is her 13th year with the Polk County OEM.

“I think Polk County fared better than many other counties,” Comstock said. “Power was restored quickly. Once we get water restored, we’ll be back to normal conditions. Some residents will have to make home repairs in order to get back to normal. I think we’re all looking forward to some 60-degree weather this weekend.”