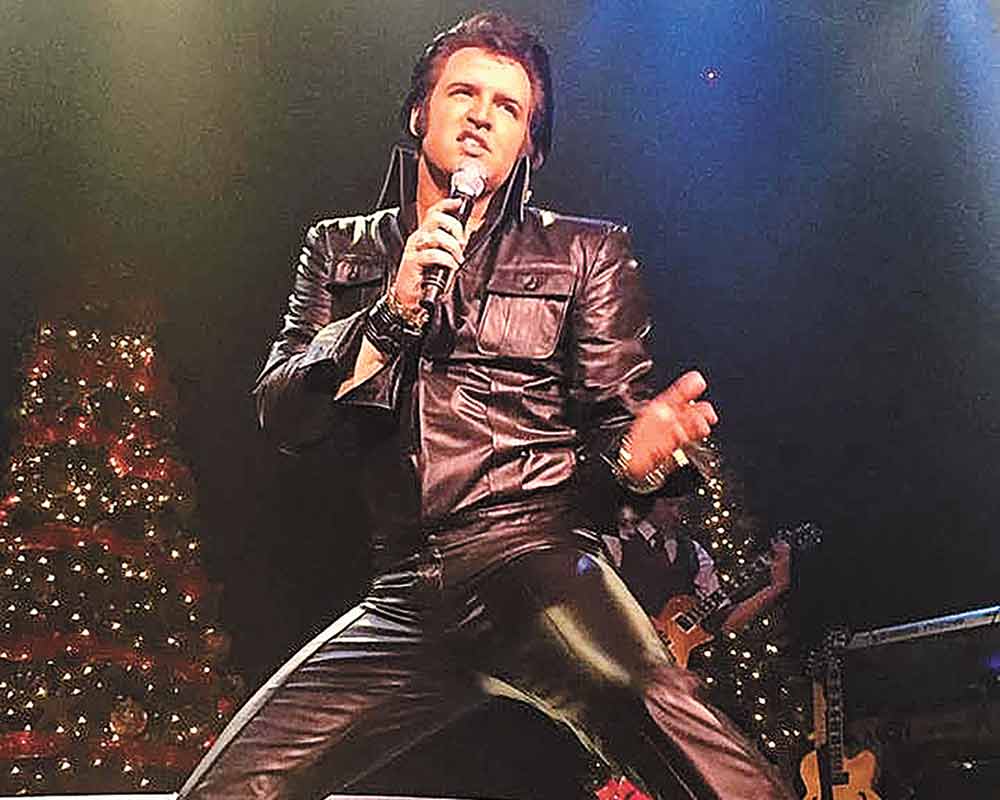 He’s got the hair. He’s got the dance moves. He’s even got the pinky finger positioned just right. His attention to detail has made Travis Powell one of the best Elvis Presley Tribute Artists in the world, and he’ll soon be performing two shows nearby. He will be at the Lufkin Pines Theater at 7 p.m. on Nov. 4 and at the Huntsville Old Town Theater at 4 p.m. on Nov. 6.

“Every day I do vocal rehearsals and watch videos of him for an hour. I believe the more you watch him, the more it becomes second nature and you can do the moves from muscle memory. When it’s muscle memory, and you’re on stage, you can relate to the audience better. All the little things you watched and heard come to you and you’re not worried about what moves you are going to do next,” Powell said.

Powell placed in the top five at the Ultimate Elvis Tribute Artist Contest in Graceland in 2014. He will perform an array of the King’s music, including his early stuff, some ‘70s songs and beloved “Aloha” tunes. He will be accompanied by an eight-man band, “Edge of Reality,” and will change his clothes to coordinate with the songs.

During the performances, Powell wants audience members to be taken back in time for a couple of hours and feel like they really are at one of Elvis’ concerts. Although he never met Elvis himself, he continues to meet people who tell him stories about seeing Elvis live.

“It’s a bonding experience when people tell me stories about Elvis. I appreciate the people who love Elvis as much as I do. They get it because they loved Elvis then and they still do,” he said.

Powell said that one of the reasons Elvis is “still alive” is because his music isn’t just appealing to people who were around when he was performing. He said he is hopeful that young people who attend his show will go home and look up Elvis’ tunes and get hooked.

“Elvis’ music was timeless. I believe Elvis, even though he had his faults, was a good guy who sang from his heart. I believe we, people in general, gravitate toward people that you can tell they believe what they sing. I don’t believe he ever sang a song that he couldn’t connect to in some way,” Powell said.

Being able to relate to Elvis is what Powell said has made him one of the top Elvis tribute artists in the world.

“Me and Elvis are both Southern guys. We were brought up the same way -- in terms of how much I practice and how much I really pay attention to the details in the little things -- like how he stands or how he holds his finger -- gives people a better illusion that they are watching Elvis,” Powell said.

Ever since Powell was 4 years old, he has been enamored with Elvis, but it was just four and a half years ago that he started impersonating him professionally. Since then, he has traveled the country, bringing his blue suede shoes with him. He has won eight prestigious Elvis impersonation contests, including “A Tribute to the King” competition in Milwaukee this year. In 2014, he won the Heart of the King Horizon Award for best new Elvis tribute artist, which afforded him with the opportunity to perform on the same stage that Elvis performed on in Vegas from 1969 to 1977.

Powell attributes his success to his devotion and daily study of Elvis. He also has his own sideburns and orders his jumpsuits from the company that owns the rights to Elvis’ original patterns.

“I try to make the tribute as authentic and as close to Elvis as I can get,” Powell said. The all-female group and National Doo Wop Champions, “Shake Rattle & Roll,” will open the concert and also perform as backup singers for Powell.

For reservations call Steve Fountain at 832-312-0074 or email This email address is being protected from spambots. You need JavaScript enabled to view it..