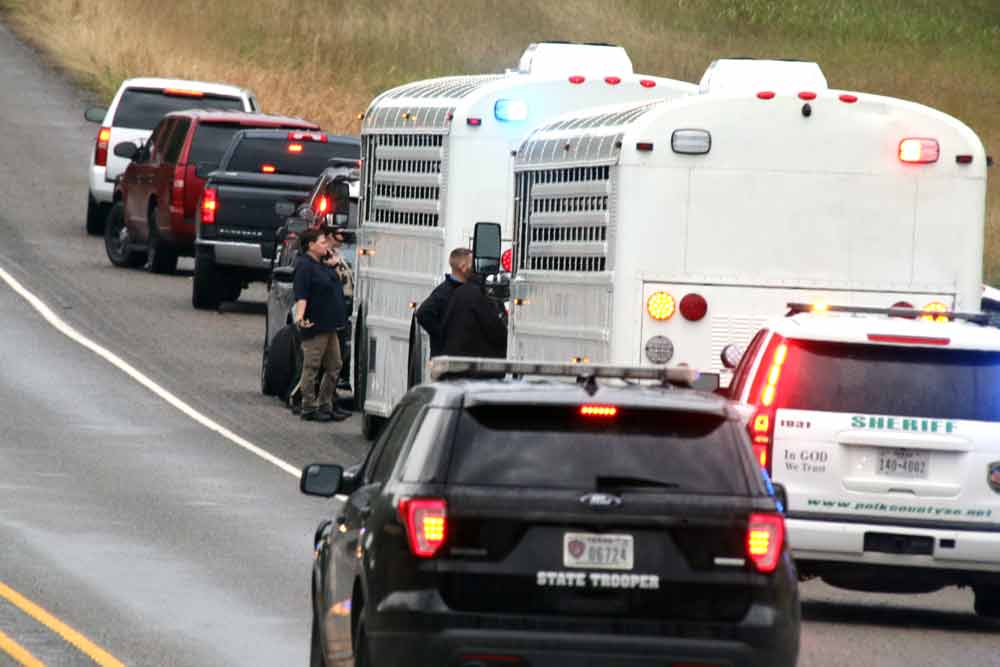 Two inmates escaped after contract prisoner transport buses were pulled to the side of Highway 190 just east of FM 1276 Friday afternoon.

Initial reports were that two transport buses were on the side of the road, repairing one that had a flat tire, while two inmates escaped, assaulted one of the guards, took a weapon and ran into the woods, according to Polk County Sheriff Byron Lyons.

“They ran from the bus, and while doing so, got a weapon away from an officer and knocked him down and ran into the woods,” Lyons said. “We had backup and support officers from the DPS, district attorney's office, (Alabama-Coushatta) Indian Reservation Police Department, and several different agencies that responded. TDC dogs were on standby, but a short time after we arrived on the scene, we got the first subject in custody. The second subject, who was in possession of the firearm, was actually caught a half a mile from here, where he'd run off into the woods and ran up on a homeowner. The homeowner found him and held him there until DPS got there and took him into custody. By the grace of God, this incident was able to be brought under control in just a matter of 30 or 40 minutes without any injuries.”

The sheriff said one of the inmates had taken a pistol, but it is still unclear whether that was taken from a secured location or off the officer’s person.

Lyons said it has been a while since anything like this has occurred. He said the situations are possible because there are so many fluid, moving parts. The sheriff commended his department for being prepared, well-trained within the county, and working together to respond in a decent amount of time.

The two individuals will face charges for escaping and could face further charges once the investigation is completed.