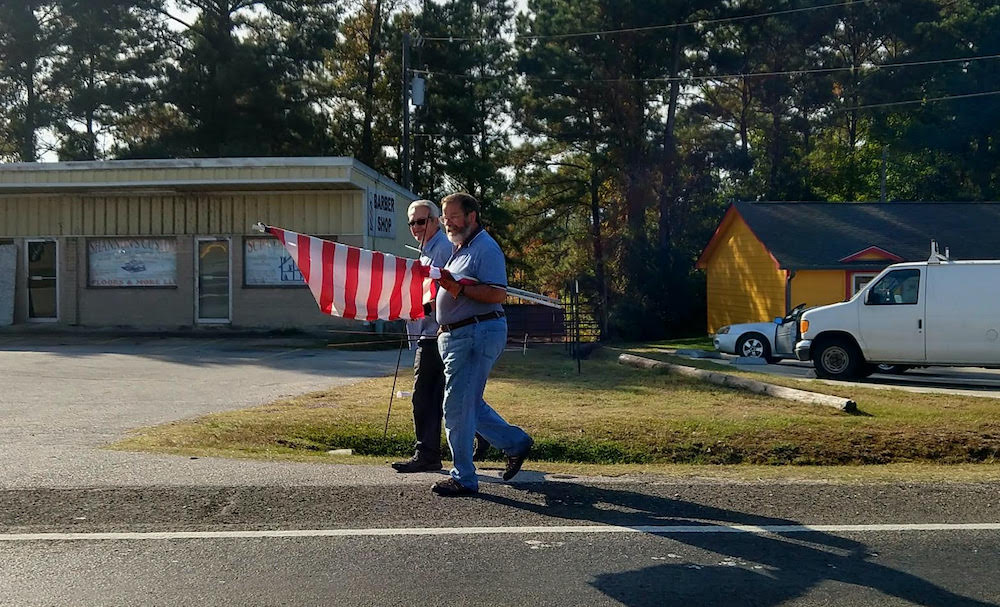 JASON CHLAPEK I PCE A pair of volunteers post flags along US Highway 190 in Onalaska to honor Veterans on Veterans Day, which was celebrated on Wednesday throughout the nation.

ONALASKA - A pair of Veterans Day ceremonies were canceled or postponed because of Covid-19.

The Polk County Garden Club’s annual tribute to Veterans on the Blue Star Memorial Highway marker has been postponed until Memorial Day 2021, and Onalaska’s annual Veterans Day program was canceled. Onalaska Mayor Chip Choate chimed in on his city’s decision to cancel its annual ceremony.

“We did not have a Veterans Day ceremony this year because of Covid,” Choate said. “Most of the Veterans in this area are senior citizens and they are the most vulnerable to this virus. We wanted to be very cautious and try to avoid any congregation, so we’re going to plan to have it next year. We have plans for Veterans Day 2021.”

Onalaska still did something to honor Veterans, however. The city placed American flags along both sides of US Highway 190.

“We put out the American flags three times a year — Memorial Day, Fourth of July and Veterans Day,” Choate said. “We put the flags out a little early this year to let everyone have the opportunity to see the patriotism in our community.”

Choate hopes the virus will run its course and not be a threat by Veterans Day next year. He also reminisced about previous Veterans Day ceremonies.

“In the past, we invited Veterans throughout the community, played patriotic music and had speakers such as State Rep. James White, Polk County Judge Sydney Murphy and Commissioner Rodney Vincent,” Choate said. “We also displayed flags and played the songs of each of the five branches of the service. We also do a muster. This is where we call out the names of Veterans from our area who passed away in the past year. When we call their names, we invite relatives or friends to call out, ‘Here,’ when their Veteran’s name is called.”