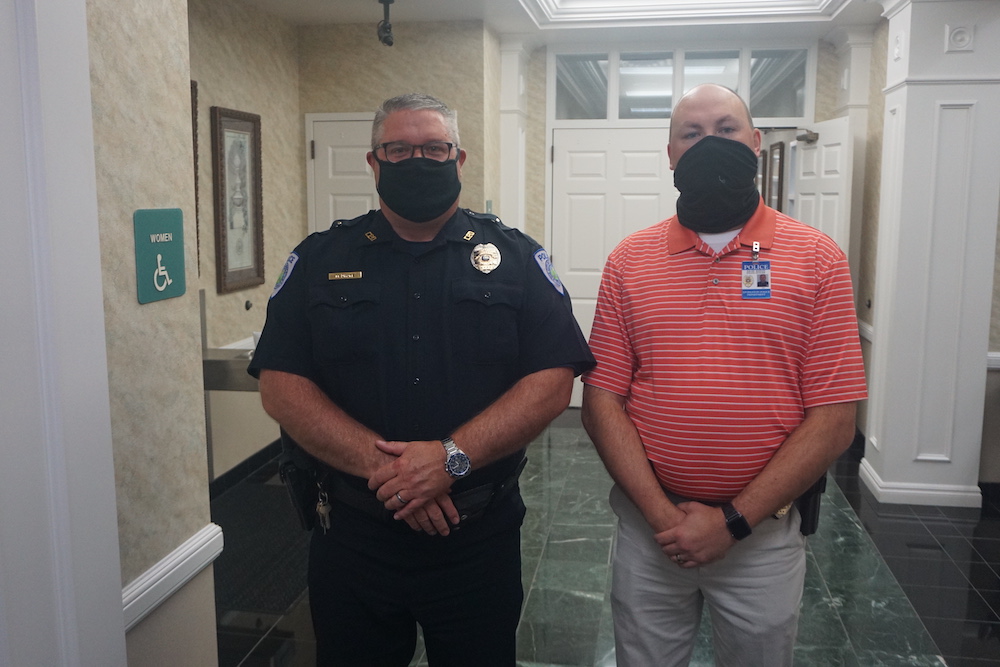 JASON CHLAPEK I PCE Livingston Police officers Marty Drake (left) and Kaleb Barker were recently promoted to new positions within the department. Drake was promoted from detective to lieutenant, and Barker was promoted from patrol to detective.

“We’re fortunate enough to have most of our department with master peace officers,” Drake said. “We make sure the cases are followed up in a timely manner. The detectives do a great job and it makes my job a lot easier. We have sergeants and patrol officers who are fair and make good decisions.”

Drake joined LPD in August 2001. He started out as a reserve deputy with the Polk County Sheriff’s Office in 1996 before joining the Onalaska Police Department as a patrol officer and school officer, then moved on to Livingston.

“Livingston earned a Cops in Schools grant in 2001 and that’s when I went to Livingston,” Drake said.

Drake spent the first 12 years with the LPD as an officer at Livingston Junior High. In 2013, he became a detective before earning his promotion to lieutenant three weeks ago.

“It’s different policing in school and policing on the street,” Drake said. “The detective is on the investigative side of things where a patrol officer on the street works the case as far up as it will go. They go case after case after case. The detective does follow-up interviews and picks up evidence. The detectives file complaints, deal with the DA’s office, go to the judges to get the warrants and continue the investigation all the way through. As a lieutenant, we oversee patrol and detectives.”

Barker joined the LPD in September 2005. He spent the first six years in dispatch before becoming a patrol officer in 2011, where he served until earning his promotion to detective two weeks ago.

“It’s a totally different world (detective and patrol),” Barker said. “I’m going to miss the camaraderie with the patrol guys. When you’re a detective, you typically go by yourself. You don’t have a partner coming with you, but you’re not in too many dangerous situations. A lot of times, it’s me going to a business to look at the camera system and request copies of a surveillance video. I’ll be doing more investigation.”

In other items of business, the city approved the holiday compensation for employees and council aldermen, the holiday observances for 2021, and a resolution for a public hearing at the Dec. 8 meeting and dues for Brazos Transit. Also approved was a payment of $56,430 to Maguire Iron for the elevated water tanks project.

“The employees get turkeys or hams for Thanksgiving, employees who has been with the city at least a year gets a week’s salary, employees who have been with us less than a year get $50, and the council members get turkey and ham for Thanksgiving and Christmas,” City Manager Bill Wiggins said. “The holidays are going to be New Year’s Day, Martin Luther King Jr., two days for Thanksgiving, two days for Christmas, Veterans Day, Fourth of July, Memorial Day, Good Friday and Labor Day. The Bauers have the tract of land just east of Peters Tractor & Equipment. We’ll have the hearing on annexing that tract on Dec. 8. Aideney Reeves will be the Lower Trinity Groundwater Conservation District board member. The city’s portion is $4,200 and it’s an annual contribution. We help the county with their portion.”