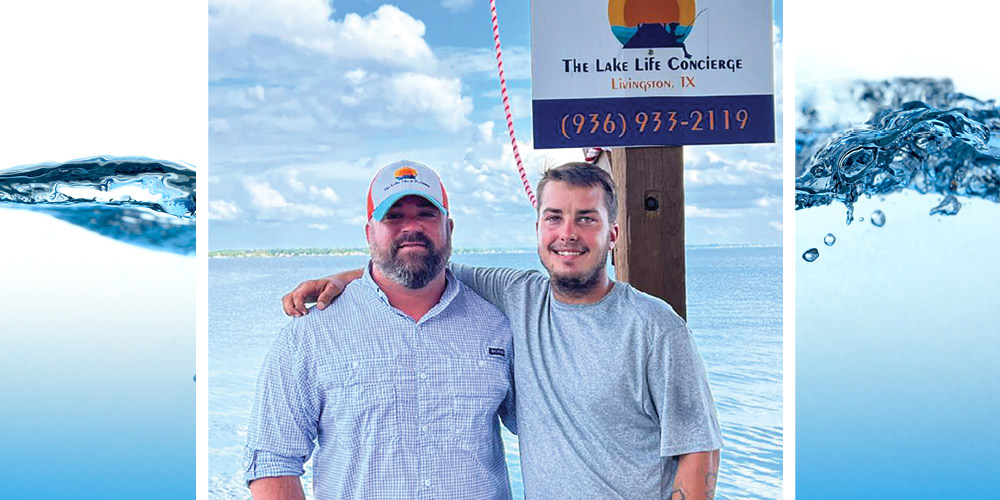 Bob Earl (left) and Trevor Mayhue near the slip from where they launched to save a family of eight. A special thanks to John Evans for bringing the story to the Enterprise. Courtesy photo

What was to be a day of fun quickly turned into a life-threatening situation for a family of eight in Lake Livingston.

Late in the evening of June 17, Bob Earl, owner of Lake Life Concierge, returned home to find law enforcement officers limiting access to his lakefront home. When asked, a deputy sheriff informed that there were people in the water and they could not respond.

Earl, along with 20-year-old Concierge employee Trevor Mayhue and his 22-year-old brother, Josh, quickly launched the company Tritoon boat into a dark sky blowing 20-knot winds with oncoming four-foot waves bouncing off the nearby bulkhead.

“We had the boat in the water in about a minute, but I was lucky to get it out of the slip, to be honest with you,” Earl said. “The swells were pushing me.”

A father with two daughters were the first to be found. The father had managed to hold onto their wave runner that had capsized, but the two girls had to be lifted from the wa-ter. The large waves had unseated them both. Closely followed by their father, the girls were taken to a protected cove near Tigerville and Country Lane.

Earl, Trevor and Josh then went back into the storm to find the wife and two sons. All three were in the water with their inverted wave runner rolling around nearby. The mother reportedly said her goodbyes by cellphone and was near drowning when Earl arrived. Trevor jumped in to help all three onto the boat, which then sailed back to the protected cove where the family and sheriff deputies joyfully greeted their safe return.

“We got on them just in time,” Earl said of rescuing the mother and two sons. “We caught them with a spotlight. The cops just gave me a general idea of where they thought they were, and we just got lucky. The wave action was really intense. They had (life)jackets on. The oldest son had a whistle. I have a P.A. system on the front of my boat and I was able to call out.”

One last trip was made to find two remaining family members stranded on Pine Island. Both were found and retrieved from the beach and reunited with the others.

The family was new to the lake and their wave runners had ferried family members from their launching point to Pine Island for a day on the beach.

As often happens, the storm caught the family unaware. Without wearing life jackets, Earl believes the day would have turned deadly.

The following morning, the team led by Earl found and retrieved the other wave run-ner, towing it ashore to its owner.