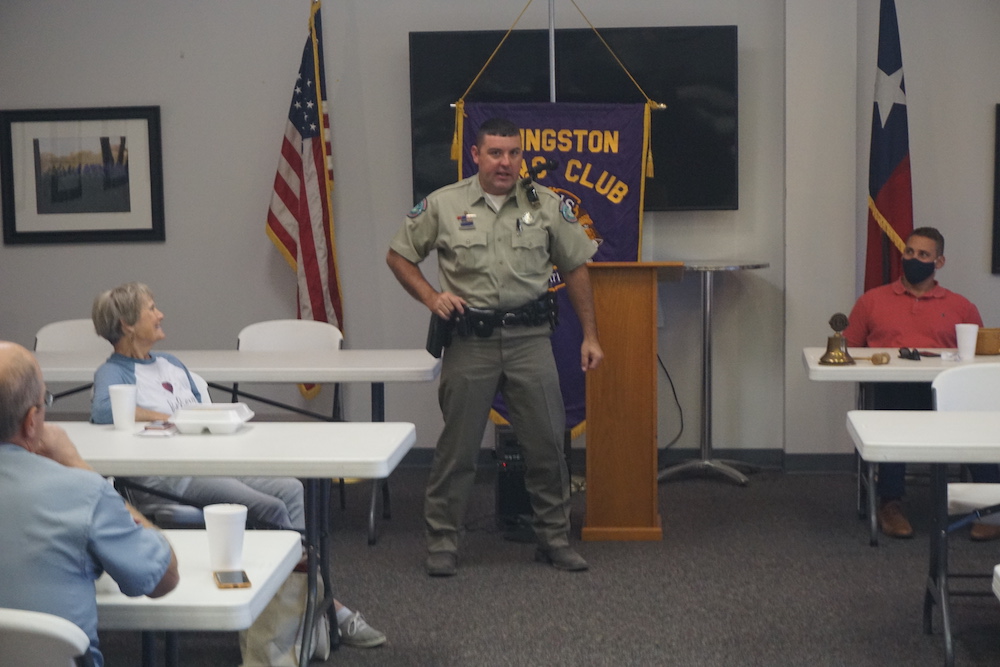 Twelve years ago today, David Johnson began his career as a game warden in Polk County.

And he doesn’t plan on leaving either. Johnson believes he has found his stomping grounds, which he talked about when he was a guest speaker at the Livingston Lions Club on Oct. 14.

“I started (as a game warden on) Nov. 1, 2008,” Johnson said. “I worked as a laborer in Pollok prior to becoming a game warden. Polk County was my first duty station and will probably be my last. Polk County feels like home. It feels a lot where I come from. There’s a lot of good people here. Livingston is just big enough where it’s not too big.”

Johnson grew up in Woodville. He also described why he enjoys living in Polk County.

“I live just north of Corrigan and I came from a small town like Corrigan (Woodville) where you know everybody and everybody knows you,” Johnson said. “There’s a small town persona where folks can lean on one another and go to one another when they need help. I like the closeness of it.”

During his 12-year tenure, Johnson spoke about the quantity and quality of hunting resources in Polk County. Deer season begins Saturday, Nov. 7.

“In the last 12 years, the resources have gotten better,” Johnson said. “We’ve seen a great increase in our deer population as well as the maturity and health of our animals. I think it’s a contribution to the people of our county respecting the law, doing what is asked of them and practicing good stewardship of the resources.”

Johnson also talked about his duties as a warden. He said that although most citizens obey the laws of hunting, fishing and boating, there are a few who need a reminder or two.

“We’ve got a broad range of activity that goes on over here,” Johnson said. “You’ll have anything from criminal trespass or possession of narcotics to boating while intoxicated. Starting around March until September, we put in quite a few hours on the water. We have an extremely large lake one here and several rivers. On average, we spend 200-300 hours a year on the water. We have a little bit of everything around here. Some of the people I’ve encountered have found interesting ways to try and hide or dispose of what they did. Sometimes we’re lucky enough to stumble across those things, and sometimes we have a little help and it’s just blind luck. Sometimes the grown adult almost acts like the elementary school kid who gets caught playing in the bathroom. We’re all human and we all make mistakes. The biggest majority of the people we deal with are good people who are out recreating and having a good time. They’re involved in sports that we regulate and they’re very respectful people. All of the bad things you hear about consist of 1 percent of the people. We have a lot of good people here and that’s why I want to be here.”

When it comes to hunting or water activities such as boating or fishing, Johnson said there’s balanced participation and interest among them. He also thinks this season will have a little more participation with hunting because of Covid-19.

“We have a good mixture of popularity among hunting and water seasons,” Johnson said. “Any given year, it can teeter one way or the other. On the years that they have droughts, we may get more water contacts, but that’s because of something going on. This was a benign water season. We had a few accidents, tragedies and BWIs, but we had a healthy amount of boat traffic. I expect to see more hunters because it’s an isolation sport. Boating and being around the lake is people being more in crowds.”

And he hopes to patrol the land and waters of Polk County for another 12 years — or more.