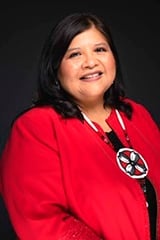 Stephanie Williams, a member of the Alabama-Coushatta Tribe of Texas and the Chief Financial Officer for the Tribe’s Naskila Gaming, will serve on the U.S. Department of the Treasury Tribal Advisory Committee (TTAC). Williams was appointed to the committee by U.S. Rep. Kevin Brady, who is the ranking member on the U.S. House Committee on Ways and Means.

The TTAC advises the U.S. Secretary of the Treasury on matters related to the taxation of native communities, the training of Internal Revenue Service field agents, and the provisions of training and technical assistance to Native American financial officers. The membership has three appointees nominated by the secretary, two appointed by the House Committee on Ways and Means and two nominated by the Senate Committee on Finance.

Prior to serving as the Chief Financial Officer at Naskila Gaming, Williams served as Internal Auditor and Executive Director for the Alabama-Coushatta Tribal Gaming Agency. Williams also served as Tribal Administrator overseeing various tribal and federally funded programs. After completing her MBA, Williams served as the VP of Support Services in Accounting at a local bank. Throughout her career, Williams has worked in various capacities with the Tribe’s Indian Health Service, housing and education programs. She also served a term on the Tribal Council.

“I am honored to serve my tribe and all tribal communities across the country as part of this prestigious committee,” Williams said. “I look forward to using my experience and expertise to help the Department of the Treasury serve tribal communities. I am grateful to Congressman Brady for entrusting me with this appointment.”

“Our tribe is grateful and delighted that Stephanie is going to give us this seat at the table as important policies and decisions are considered. We have full confidence in her to represent our tribe well and give the secretary guidance that is in the best interest of tribal communities across the country,” Ricky Sylestine, chairman of the Alabama-Coushatta Tribe of Texas Tribal Council, said.
Williams’ term on the TTAC will expire on June 20, 2023.