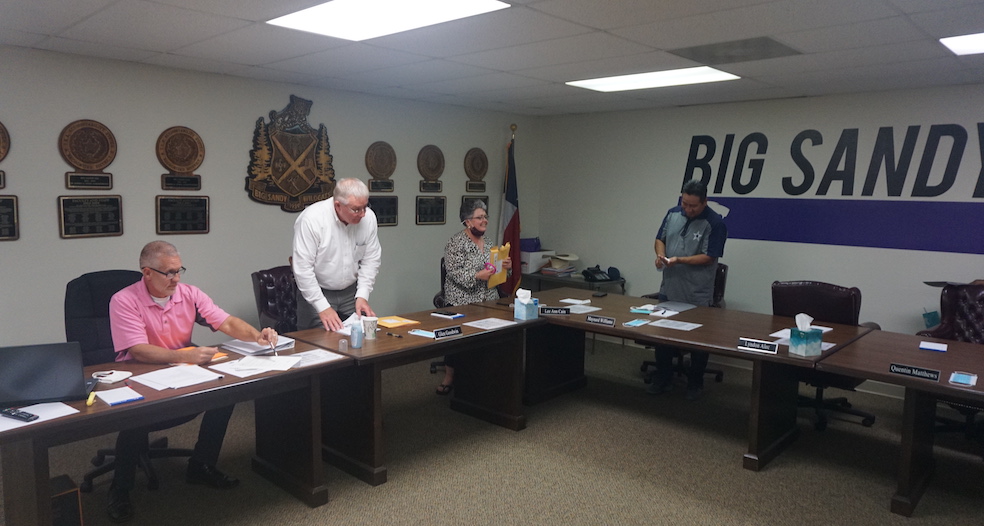 JASON CHLAPEK | PCE Trustees Glen Goodwin (second from left) and Lee Ann Cain (second from right) receive a round of applause for their service with the Big Sandy ISD school board.Both Cain and Goodwin served their final meetings as trustees for the district. Neither one sought reelection for their terms, which expire Nov. 3.

Both trustees’ terms expire on Nov. 3, and neither one sought reelection. Goodwin was with the school board for 15 years, while Cain served four.

Four trustee positions are up for elections with newcomer Darrell Murphy and current trustees Mark Duff and Quentin Matthews running unopposed for Positions 2, 5 and 6, respectively. William Handy Jr. and Kabe Murphy are running for Position 4. Carpenter announced to the board that the Texas Education Agency approved the district’s Asynchronous Learning Plan. The TEA approved it on the first try.

“It’s a compliment to our principals,” Carpenter said. “The Asynchronous Plan is how you’re going to utilize a learning management system, which for us is Google Classroom and how you’re going to instruct students virtually. The TEA had a template to work from and we received some good guidance from Region VI in Huntsville, who helped the administration develop it and even proofed it and gave it back to us and we made some adjustments before we submitted it.”

“We receive federal funds and have policies in place,” he said. “After meeting with the Alabama-Coushatta Tribe, particularly their Education Department, we developed those policies and procedures. We usually do this in October.”