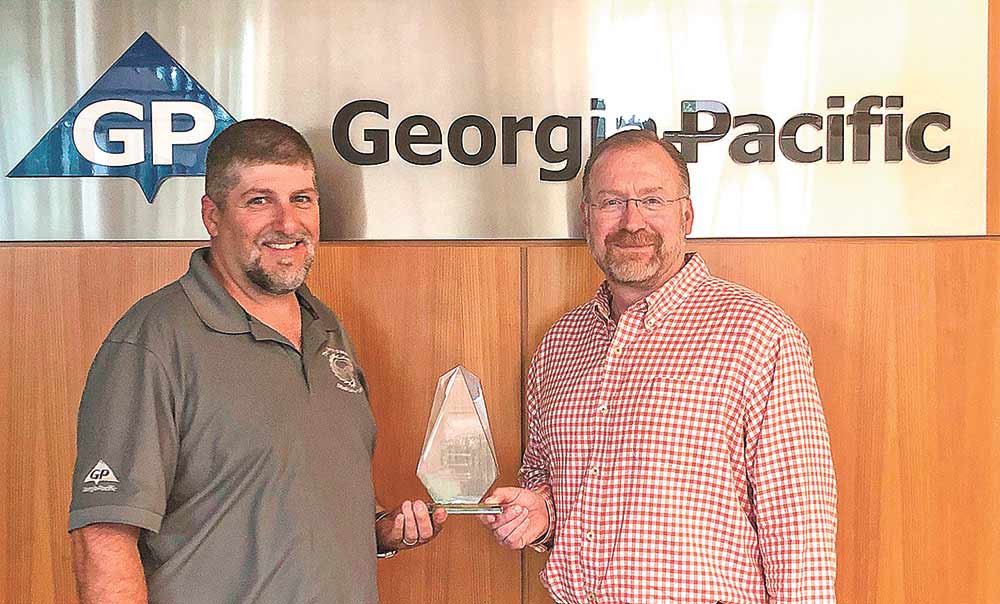 Georgia-Pacific’s Diboll Lumber and Diboll Particleboard have been awarded the Resiliency Award for conserv-ing energy to help protect the Texas grid during last year’s winter storm. Accepting the award on behalf of Geor-gia-Pacific are (from left to right) Danny Wright, Diboll Lumber Plant Manager; and Pat Aldred, Vice-President of Composite Panels. Courtesy photo

DIBOLL—Georgia Pacific’s Diboll Lumber and Diboll Particleboard have been recognized for their efforts to help conserve energy following one the region’s most severe winter storms in February 2021. Enel X, an advanced energy services company that provides smart value-added services and solutions that enable businesses and communities to create, store, use, and manage energy more efficiently, has awarded the two local building products facilities with the prestigious Resiliency Award.

East Texas is known for its warm and humid weather. Summers are hot and for the most part winters are mild, but last year that weather pattern took an unpredictable turn when a winter storm blew through the region dumping snow and ice while causing widespread power outages. Energy demand climbed to record levels for the season, putting extreme pressure on the Texas power grid system. In an effort to protect the state’s power gird, Georgia-Pacific’s Diboll mills chose to significantly reduce its power consumption.

“Georgia-Pacific was chosen for the Enel X Resiliency Award for reducing their energy load over the four-day emergency period to help the grid,” said Joel Obillo, Head of Demand Response for Enel X North America. “We appreciate their efforts to go above and beyond during critical times when it is needed most to help their local communities. This award is one way we can show our appreciation for those who are making a difference.”

“It was an operational challenge, but we understood the significant positive impact our efforts would have on the area and the state of Texas,” said Danny Wright, Diboll Lumber Plant Manager.

The two Georgia-Pacific plants have participated in the Enel X energy conservation program for many years, but this is the first time the facilities had to rely on backup generation for multiple days.

“We usually reduce our energy consumption during the heat of the summer periodically for a couple of hours to help alleviate demand on the grid,” said David Thelen, Area OSB/CP Manager. “Despite the operational interruptions, doing our part to protect the power needs of our communities is the right thing to do.”

Extreme weather events, like storm Uri in February, are becoming all too familiar. According to Obillo, companies can help protect the state’s ability to keep the power on.

“Demand response efforts, like Georgia-Pacific’s Diboll plants demonstrated last year, are a great example of how companies can help stabilize and build a more resilient grid.”