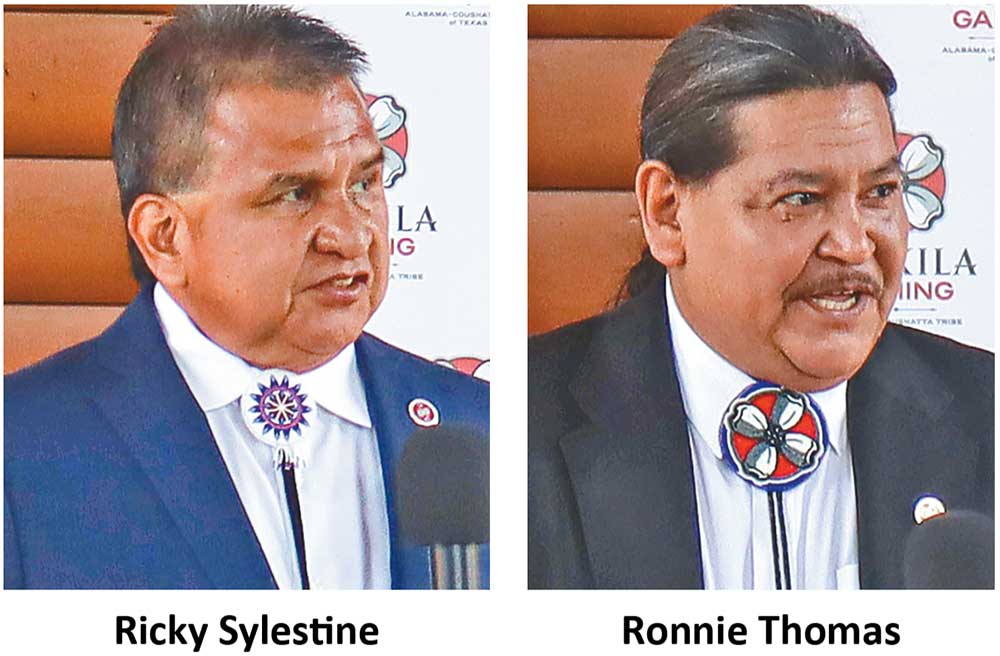 Amid struggle to keep doors open

Over 100 supporters of the Alabama-Coushatta Tribe of Texas gathered Monday to celebrate the sixth anniversary of the opening of Naskila Gaming and its profound economic benefit to the region. Elected officials, community supporters, tribal citizens and others marked the anniversary of Naskila Gaming, an electronic bingo facility that has welcomed more than 5 million guests since it opened in May 2016.

“Thanks to the success of this facility, we are able to take better care of our people: our elders, our sick, our families and our children,” Tribal Council Chairman Ricky Sylestine said. “But the impact on the Alabama-Coushatta Tribe of Texas is only part of what we are celebrating today. In fact, what we are celebrating is a major economic engine for East Texas.”

The largest private sector employer in Polk County, Naskila Gaming is responsible for 700 jobs and an annual economic impact estimated to be $170 million. When it was shut down for numerous months in 2020 due to the pandemic, its employees were still paid, so that they could provide for their families. “We are grateful to have contributed to the economic development of this region,” Sylestine said.

“Congratulations on continuing to move forward. It has been a wonderful experience for me to partner with the tribe to make a better place for the tribe and a better way of life,” Polk County Judge Sydney Murphy said, commenting on the economic development for Polk County as well as the benefits and healthcare the facility provides.

“We couldn’t ask for a better leader or a better friend to our tribe,” Sylestine said of Murphy.

Throughout Monday’s celebration, tribal leadership recognized and thanked elected officials who have fought on behalf of tribal citizens and Naskila Gaming employees.

“We are extremely proud of what Naskila and the Alabama-Coushatta Tribe of Texas have built here and we’re very, very encouraged by the legacy you’ll leave for many generations,” State Rep. James White, who has long represented the tribe in the Texas Legislature, said.

“This is a regional effort that will have an effect on East Texas and all of the 12 counties in the DETCOG region and the State of Texas,” Eddie Hopkins, executive director of the Jasper Economic Development Corporation, said.

Rachel Iglesias, a member of U.S. Rep. Brian Babin’s staff, read a certificate from Babin expressing support for the tribe and Naskila. While Babin has represented the tribe in Washington for many years, the reservation will no longer be in his congressional district following the redistricting that was signed into law last year. “Y’all have been a friend to him for many years and even after redistricting he wants to be a champion for you all,” Iglesias said.

“We’re celebrating six years of Naskila but in reality, we’re celebrating our tribe’s tribal sovereignty which is the right of Indian tribes to govern themselves,” Tribal Council Treasurer Ronnie Thomas said. “It allows our people to follow our cultural traditions and way of life – to build homes, give raises and pay for college tuition and books. We recently broke ground on a new educational center.

“We are facing this challenge as a sovereign people … to sustain our people and traditions,” Thomas said.

The U.S. Supreme Court heard oral arguments Feb. 22 in a case brought by Ysleta Del Sur Pueblo, a federally recognized tribe in El Paso. The Alabama-Coushatta Tribe will also be affected by the ruling as the oral arguments presented could make clear that the two federally recognized tribes in Texas are allowed to operate the electronic bingo facilities on their reservations.

The case is extremely important to the economy and the people of Texas because a ruling from the Supreme Court has the potential to end the State of Texas’ longtime effort to prevent the two tribes from offering electronic bingo on their reservations.

“The Court’s term ends at the end of June, so sometime between today and the end of June but that’s all we know,” a member of the tribe’s legal team said, when asked when a ruling is expected.