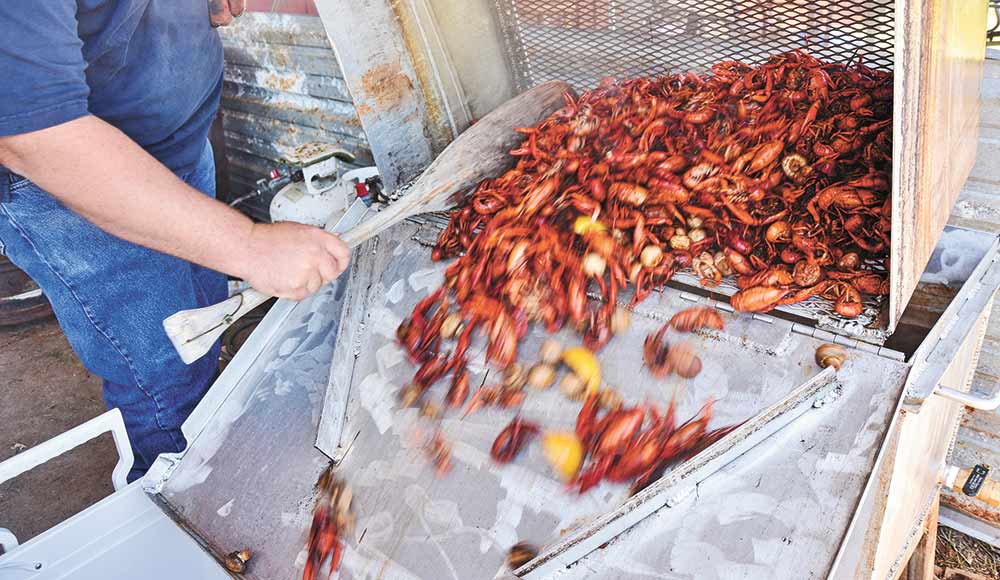 Crawfish continue to gain popularity around Texas. Production acres increased by around 2,500 acres over the past three years. Texas A&M AgriLife photo by Adam Russell

Texas crawfish emerged from the pandemic in good condition, but cooler winter weather kept poundage yields down during this season’s peak, according to a Texas A&M AgriLife Extension Service expert. Whether you call them crawfish, crayfish or mudbugs, Todd Sink, Ph.D., AgriLife Extension aquaculture specialist and director of the AgriLife Extension Aquatic Diagnostics Lab, Bryan-College Station, said the industry continues to grow in Texas.

And although yield numbers were above average, weights were down as a result of late-winter cold. The last three seasons have been difficult for the industry overall, he said. Sink said 2020 was a good harvest year for crawfish producers, but pandemic restrictions that led restaurants to close or limit capacity hurt demand for a food that is heavily dependent on social settings and events, including crawfish boils.

Then in 2021, Winter Storm Uri delivered another blow, he said. The extended cold snap did not kill crawfish, but it did stunt their growth, which made them smaller at the season’s peak. Numbers were typical, but the weights were below average. Hurricane Ida in late August 2021 presented another setback for overall crawfish production, Sink said. The storm didn’t impact Texas producers on a large scale, but some of Louisiana’s top crawfish-producing areas were ruined by infrastructure damages and saltwater swells that reached farms.

Sink said 2022 has been similar to 2021 with colder weather slowing crawfish growth and hurting poundage despite healthy numbers. “I would say we’ve reached pre-pandemic levels in that Texas’ crawfish production was going up every year,” he said. “But the sizes have been below average, so our poundage is probably not quite there yet.”

The per-pound price paid for crawfish depends on where and when consumers purchase them, Sink said. Lent, the 40-day period from Ash Wednesday and ending on the Holy Saturday before Easter, is typically when crawfish season peaks, Sink said. In 2020, on the first day of Lent, live crawfish were around $3 per pound or $90 per 30-pound bag around College Station, which is relatively close to farming operations in western Louisiana and Southeast Texas. This year, live crawfish were $4 per pound or $120 per bag. Prices were even higher this year in metropolitan areas like Austin, San Antonio and Dallas, where live crawfish prices routinely push beyond $4 per pound and even $5 per pound during peak demand, Sink said. “Most of the time it comes down to how far you are from crawfish production locations,” he said. “The bigger the market and farther away like Dallas, they can get expensive. Fuel prices have amped up those prices this year as well.” But after Easter, prices begin falling. Sink said he’d seen live crawfish for $2.35 per pound recently.

Around 60% of Texas acres are dual-purpose flooded rice fields that provide habitat for crawfish farming until rice is planted. Those acres produce around 650 pounds of crawfish until they are shut down for rice planting. Acres dedicated solely to crawfish produce 900-950 pounds per acre and can be harvested a month to six weeks longer than rice acres, Sink said. Texas ranks No. 2 in crawfish production and remains far behind Louisiana in production. But he estimates Texas gained about as many acres as Louisiana lost this past year to economic hardship and hurricane damages and invasive apple snail infestations. “Texas maybe gained 1%-3%, but we are still small apples compared to Louisiana,” he said.

In 2019, Louisiana crawfish farmers harvested 150 million pounds of crawfish from 250,000 acres. Sink said the popularity of crawfish continues to grow. A recent article by Aquaculture North America reported crawfish popularity hit a record high this season based on domestic and foreign demand from countries like China. “It’s been a strange couple of years for crawfish producers,” Sink said. “I’m looking forward to a year with a mild winter and without any disruptions. That should bump our numbers up.