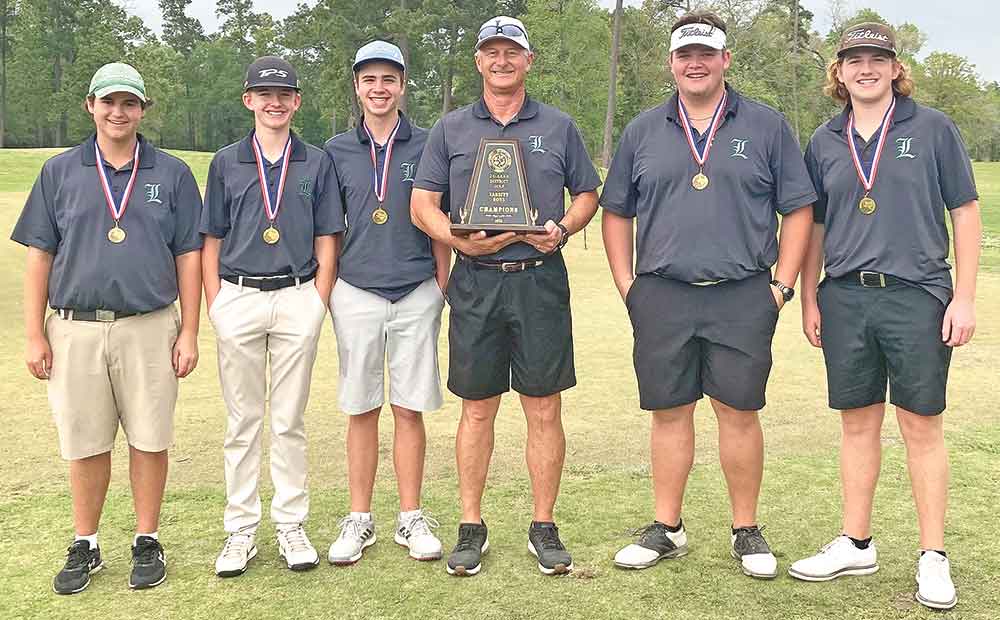 For the first time in school history, Livingston golf has advanced to the state tournament. The team has worked tirelessly on the links to better their game, showing marked improvement.

Livingston golf coach Frank Brister said the accomplishments of this year were unexpected when judging by last season’s scores.

“We were fair last year and the first tournament that we went to (in 2022) was over in Huntsville,” Brister said. “The kids played pretty good and I knew after that they were going to be real competitive. We ended up winning five of the six tournaments that we entered. We got second in the other one. We weren’t terrible in that one, Diboll beat us by a few strokes.”

The team of Tucker Cherry, Drew Davidson, Brandon Munson, Jackson New and Breckett Long have taken five tournaments and the district title, while placing second at regionals to advance to the ultimate competition in Class 4A.

“In district, you can look at the numbers and I thought we had a pretty good chance,” Brister said. “Anytime you have kids shooting all in the 80s, you are going to be competitive in 90% of the tournaments that you go to. The only tournament you may not be competitive is the one that we are going to. I looked at the numbers there and we are in the bottom part of those. If we shoot some of our previous numbers, we will be very competitive. We’re not going to be there, probably, with the top three teams if they shoot the same. But I don’t know what kind of golf course they’ve played on. You never know what it is going to be. I know Argyle won state last year, and next year they are going to 5A. They are very competitive, and they shot in the 70s.”

The coach said the difference between his group last year and this year is the work put in over the offseason.

“In the summertime, it was just 18 or 36 holes; they were playing, playing, playing golf. Once the kids started playing a lot, the parents started putting in too. They just kept putting in more time with the kids. Our parents are golfers too and that helps. They’re going to spend so much more time with their parents than they will with me. I don’t even see them until after football is over.

“My main goal was that I thought if we played decent, we might have a chance to win district. I knew Hardin-Jefferson was pretty good, and last year Hamshire-Fannett won the district. We were right there with them until the second day (in last year’s district tournament) and got beat out by about 30 points. We had a fair team last year too, but these kids that are sophomores were shooting about 100, now they are shooting in the 80s.”

Each district takes the top two teams, but the top two individuals that are not a part of those teams can also advance. Last year, Tucker Cherry advanced as an individual medalist.

This season, Livingston had so many players that shot well, the top five of the Lion golf team advanced, as well as an individual. Of the 12 that advanced beyond the district invitational, half were Livingston golfers. Teams with four players that can register solid scores have a good chance of advancing. Having five helps even more, because the top four scorers are recorded, and the fifth — whichever lowest — is dropped.

At regionals, Lake Belton won the tournament, while Livingston finished second, and Sealy in third place also advanced to Austin.

“Lake Belton won, they are a school out of Temple. They are going to go to 5A next year. They played with our kids both days and they have one kid that is really good. He is leading the state (in Class 4A) and is right there within two or three strokes of anybody in the state of Texas.”

Understandably, golf at Livingston has become a little more popular these days. The competition has made the team better and there are a few additional athletes who have decided to give golf a try.

“We’ve always had a lot of kids, we just haven’t always had the quality at a competitive level. Breckett it is the only one graduating, so when you look at it like that, the kids underneath are saying, ‘I’ve got to get good.’ The thing about it was, the three sophomores that are in the top five this year, two of them weren’t in the top five (on the team) last year. They were shooting in the 100s.

“All of these kids started playing golf like two years ago, except for Tucker. He is the only kid that played junior golf. There are probably more kids playing junior golf, but I don’t know. I don’t see them until they get into the ninth grade.

“My goal whenever I came up to be a golf coach was I want them to have as much passion and want to play as much as I want to play. I told them if they get like that, they are going to do the stuff they want to do. My big thing on their swing is that I want them to have good posture and balanced throughout the swing. It is the fundamentals that are going to help them out. The kids that play softball or baseball, the ball is moving, so they are going to move with it more. But, the initial hit is going to be the same, with that weight transfer.”

The coach said having a course like Livingston Municipal nearby has been an advantage to the program. At a previous stop, he has had teams drive as far as 30 or 40 miles just to find a tee box.

The future of Livingston golf looks extremely bright. With only one senior graduating, most of the team returns. Brister said there is also an eighth grader that has shown plenty of promise and could make a difference on the varsity as soon as next year.

On Thursday, the team traveled to Austin to play a practice round and become familiar with the state tournament course. The event begins May 9 at Legends Golf Course, located on Lake Lyndon B. Johnson.