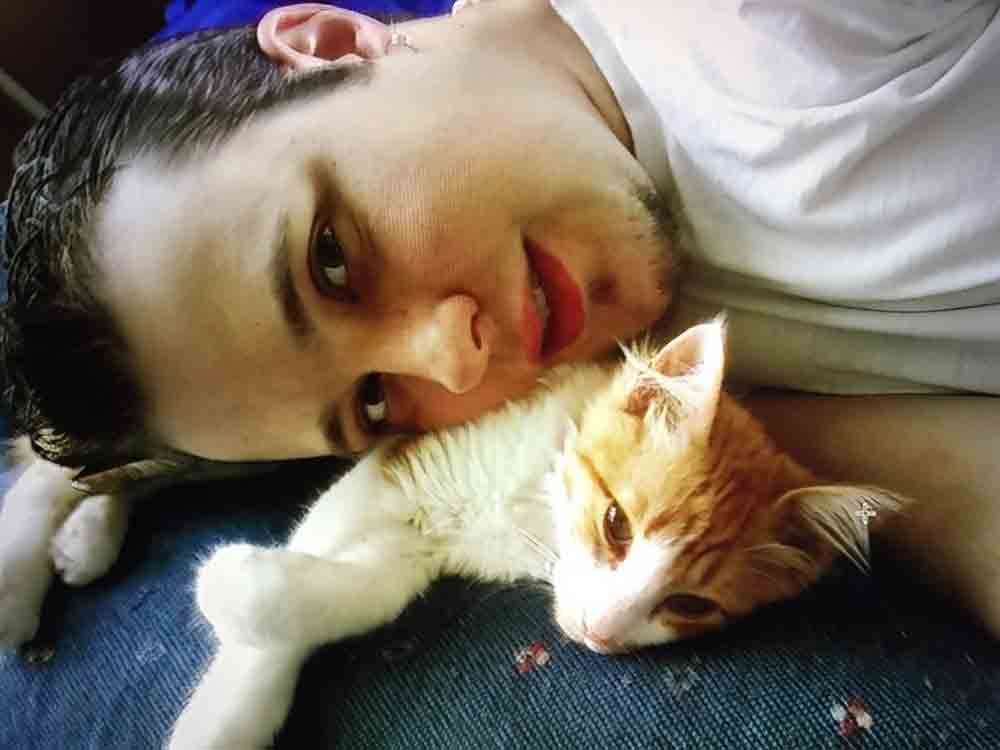 The age of 13 is a magical age in America. It tends to signal that transition, for most, from gawky pre-adolescence into something different. Not quite a full-blown teenager, but there on that precipice. There’s still fun to be had.

Thirteen, if you are a cat, is a good age. Not ancient, but not quite a spring chicken, either. Our animal family members live longer, fuller lives nowadays, due to combinations of genetics, better nutrition and of course, plenty of TLC. My little buddy Pancho still had fun to be had. He was 13.

Pancho transitioned, last week, from his handsome, tall and thin, orange and white form here into something sublime, but I miss him. I am not alright about this.

My mind keeps transitioning back to a Saturday afternoon, March 7, 2009, to be exact. I had just gotten through playing my Saturday morning solo acoustic gig at the Nacogdoches Farmers Market, when I spied, in the corner of my eye, the most adorable tiny kitten ever.

The sweet lady who carried him had made it her mission to see that as many feline and canine citizens in her midst without homes could end up in loving homes. This kitten was one she’d been fostering for a brief while, and I asked her right away if he was available for adoption. As luck would have it, he was.

Since March 7 was the birthday of our greatest songwriter, Mr. Townes Van Zandt, I reckoned I should name the little guy something to honor Townes, and so his name became Pancho (Lefty came along about a month later). I was over the moon to bring him home and tell him, “This is your new home, lil’ buddy.”

The story his foster mom had given me along with his paperwork from the vet, about his origin, was horrifying, and I blotted it out for a long time because I could not/did not want to imagine. Apparently though, the tiny orange-and-white kitten came dangerously close to becoming a coyote’s meal, but luckily a combination of his will to live and the intervention of a rescuer who saw the beast with the tiny kitten, ended well.

I often wondered, through the years, if Pancho had any brothers or sisters, or where his mama might be. Those thoughts often turned to scary “what ifs”: like what if Pancho would’ve ended up as someone else’s companion; in someone else’s home. Again, as much joy as he brought to my life, I snuffed out those thoughts about as quickly as they’d emerge.

As time moved on, that little squatty kitten grew up to be a long, tall, skinny and athletic dandy of a feline specimen. He was a cat’s cat who loved his catnip and treats and loved eating anything piscine.

He was chill as a kitty could be, but also quite active, and could jump higher than any cat I’ve ever seen. But of course, if you had spring-loaded jackrabbit-esque feet like Pancho did, you could probably jump that high, too.

He carried himself with an uncommon grace and self-assuredness, and every year, from his first full year onward, he would grow a ridiculously epic mane, starting in the fall. It would start to wane in the springtime, yet he still had something of a mane to show off, even in the summer months.

Sometime in the past couple of years, I had taken to calling Pancho “Animal Man.” He had a few nicknames, among them “Panchito,” “Mr. Mane,” “Panchy” and “Tailymane,” but the “Animal Man” handle came from my observation that he was like a little man inside of a cat’s body.

Sometimes I would sit with him and just imagine what he would be like if he were human. I’m pretty sure he’d have impeccable manners and have a great fashion sense. He’d probably resemble someone like David Hyde Pierce’s Niles Crane character, yet with a physique like Abraham Lincoln’s.

A few years ago, Lefty, who is Pancho’s lynx-point Siamese life-mate, was horribly ill; ill to a degree that his vet did not expect him to recover, yet he did. While he was so sick, I could see how worried Pancho was. Years prior to that, when Lefty was stricken with a brief sinus infection, it was the same concern, with Pancho wanting to get into the pet carrier with his brother, to ride to the vet’s office with him.

Although Lefty is now robust and recovered, I still figured, inevitably, that someday, he would pass before his beloved Pancho, and that Pancho would be beyond lost.

Now, it might be the most heartbreaking thing of all to watch Lefty wandering around, looking lost; knowing he is trying to find his brother.

They mourn losses around them. They know what’s going on. Although they might not express things with the same language you and I may use, our animal friends and family have feelings, souls and lives to live.

So if you are reading this and you have fur-covered family members, whether they’re young, old or in-between, give them a little extra attention today. If you have time in your busy day, why not pick up some special treats at the store for them and go home on your lunch break and treat them to a surprise.

After all, you are their world.