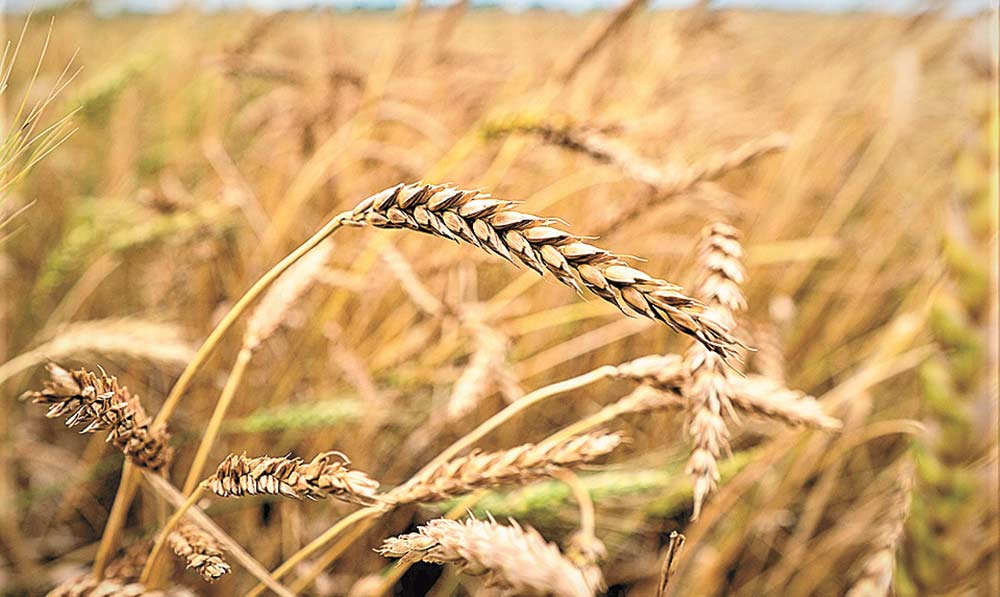 Wheat is among commodities that could be impacted by conflict between Ukraine and Russia in the near- and long-term. Texas A&M AgriLife photo Laura McKenzie

The Russian invasion brought devastation to Ukraine, but uncertainty and volatility fueled by this conflict are rippling through U.S. and Texas agriculture markets. Texas A&M AgriLife Extension Service economists said both Russia and Ukraine do not represent major destinations for U.S. commodities, ranking 56th and 80th, respectively. However, the conflict’s impact on global trade, trade alliances and infrastructure could ripple throughout U.S. sectors in the near- and long-term future.

Russia imported between $1.2 billion and $1.6 billion of U.S. agricultural products annually until imports fell to around $200 million to $300 million over the last five years, following its invasion of Crimea. David Anderson, Ph.D., AgriLife Extension economist, Bryan-College Station, said this type of conflict creates a “factor of chaos.” The invasion may not directly impact U.S. supply chains, but it will likely disrupt specific sectors, commodities and products as well as create uncertainty, which typically leads to market volatility. For example, Anderson said the invasion and subsequent sanctions against Russia could further complicate U.S. fertilizer supplies and prices. He noted one major fertilizer product component comes from a Russian-based company.

Anderson said this type of conflict directly impacts lives in that region, but it also creates worry and uncertainty throughout all sectors and markets that ripple through the U.S. economy and many other countries to varying degrees. “We are blessed to live in a big, diverse nation where we produce an exportable excess of many basic agricultural commodities,” Anderson said. “We do import a lot of fruits and vegetables and coffee, but none of that is coming from Ukraine or Russia.”

Wheat is among commodities that could be impacted by conflict between Ukraine and Russia in the near- and long-term. Mark Welch, Ph.D., AgriLife Extension small grains economist, Bryan-College Station, said the futures grain markets, from wheat to grains for livestock feed, will likely be affected most by the invasion. Ukraine and Russia together are expected to account for about 30% of global wheat exports in the current marketing year.

On Monday, Kansas City July wheat contracts, which represent harvest contracts for Texas producers, fluctuated wildly but were expected to trend higher, Welch said. Corn and soybean prices were also trading higher. “We are pretty deep into the current marketing year for wheat, which ends May 31, so I do not know how much more wheat is left to be shipped in the next few months,” he said. “In that respect, the timing of this invasion may limit short-term impacts. Certainly, damage to port infrastructure or shipping restrictions in the Black Sea will slow trade and make it much more expensive.”

China announced it is open to grain shipments from Russia. This would provide an outlet for Russian grain sales and help China meet its grain import needs. Much like what happened during the tariff war between the U.S. and China, trade alliances and flows may shift, Welch said. “It’s really tough to say right now because there are more questions than answers,” he said. “Uncertainty fuels volatility, and when commodity supplies tighten, any disruption to the market can make an impact.”

Anderson said Ukraine and Russia will have very little direct impact on U.S. protein markets, but the conflict could impact some trade sectors indirectly, including protein production.

According to a CME Group’s Daily Livestock Report following the invasion, the impact of restrictions on Russian protein purchases in the world market are likely to have no impact on global trade of those items. Russia once relied on imports for proteins like pork, poultry and beef, but has reduced its dependence by increasing domestic production. In 2010, Russia imported around one-third of its pork, but increased its production by 26% and is now a net exporter of pork. In the early 2000s, more than half of Russia’s chicken was imported, but by 2010 imports dropped to 27%. Last year, Russia imported 5% of the poultry it consumed, but also exported the same amount.

Beef has been more difficult to secure because of land requirements, know-how and domestic preference, according to the CME report. Russian beef consumption has fallen 32% since 2010, and much of its beef imports come from neighboring ally Belarus.