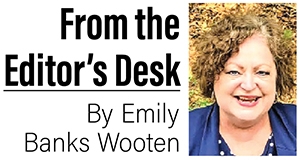 Early Sunday morning, the day after Christmas, when I read online that Archbishop Desmond Tutu had died, I couldn’t help but feel a little sad. I’d had the opportunity to meet him one spring day in March of 2004 at St. Luke’s Episcopal Church.

The Nobel Peace Prize Laureate had come to Livingston to visit an inmate on Texas Death Row and to express his opposition to the death penalty in a press conference afterward. The eloquent South African anti-apartheid and social rights activist spoke passionately that day about injustices.

Tutu had just come from the Polunsky Unit where he visited Dominique Green who was serving time for the 1992 robbery and shooting death of a Houston man. Green first learned of Tutu after reading “No Future Without Forgiveness,” the archbishop’s book regarding his experience as chairman of South Africa’s unique experiment, the Truth and Reconciliation Commission, which investigated past human rights abuses. During the commission’s sessions, perpetrators of political violence were encouraged to tell the truth about what they’d done during the apartheid era and the victims of that violence, and their families, were encouraged to forgive those who repented their violence. According to those that knew Green, he felt his life had been changed for the better by the other inmates on death row and by reading Tutu’s book.

Learning of the 90-year-old’s death, I reflected fondly on the tiny little man who was slight in stature, yet larger than life with his big smile, twinkling eyes and passionate beliefs. What a life of service he had lived.

My thoughts then turned to the family of Yancy Williams who’d just spent their first Christmas without their husband and father. Yancy died Oct. 5 after a lengthy battle with COVID-19. Yancy, too, truly lived a life of service. My friend and former schoolmate had proudly served his country in both the U.S. Marine Corp and the U.S. Army Reserves. He served his community for many years as a line technician with Sam Houston Electric Cooperative and as a firefighter with the Livingston Volunteer Fire Department.

I know that Yancy was human like the rest of us but I don’t know anyone that didn’t like him and I’ve never heard a single negative remark uttered about the man. He was so loved and well-respected in our community that close to 200 units from law enforcement agencies, area fire departments and Sam Houston Electric Cooperative showed their respect for the hometown hero in what was the longest processional I’ve ever witnessed as Yancy’s body was escorted home from a Houston hospital the morning of Oct. 6. I stood there watching as a tear rolled down my cheek.

Just the prior week, our community was devastated by the death of Cole Overstreet, a Livingston High School senior who was killed by a drunk driver in a hit and run accident that occurred following the Homecoming football game. I didn’t know Cole personally, but in the days and weeks that followed, I heard story after story from youth and adults alike about a magnanimous, bright young man who was a good kid, friends with everyone, smart, nice, polite – just the quintessential boy next door. Numerous people shared stories of the impact that Cole had had on them. On the cusp of adulthood, it was clearly evident that although his life was tragically cut short, Cole was already on a path toward living a life of service.

It’s been a rough couple of years. 2020 was unprecedented and 2021—while a little different—was hardly an improvement. As a result of the upheaval, I have lots of questions and concerns and I assume others do too. I find myself trying to live with intention and be present in the moment. But I also think about the big picture too. What’s important? What matters? How do I want to spend my time? What’s best for me and my family? What are my contributions to my community? There’s a sense of urgency to do the right thing and make everything count.

On the evening of Dec. 23, I was in the kitchen cooking supper for my family when I heard my phone “ding” with a text message. It was a friend of mine, apologizing profusely for contacting me during the holiday but inquiring if I knew any place she could get a COVID test first thing the following morning. She was to celebrate Christmas with her great grandchildren the following day at 11 a.m. but had just discovered that someone she had hugged a few days prior had tested positive. I went to the website for the Polk County Office of Emergency Management and saw where the county had contracted with a firm that conducted drive-thru testing daily behind the county annex. I texted this information to my friend and resumed cooking supper.

I heard the familiar “ding” of a text on my phone shortly thereafter. I checked and it was another friend inquiring if there were any overnight accommodations at my brother’s ranch outside of Waco. I texted her that he and my nephews have several Airbnb properties and that I would look up the links and forward them to her. It took a little longer than I expected, but I found them and emailed them to her. I returned to my cooking.

And no, I’m not comparing myself to Archbishop Tutu, Yancy or Cole. I’m simply illustrating that sometimes it takes very little to help someone or answer them or make them happy or just be there—and that if we can, we should. When I think of the times when others have been there for me, or helped me out of a jam, I’m overwhelmed with gratitude. These days, I find that I often feel happiest when doing little things for others. And what could be a better feeling than that?!