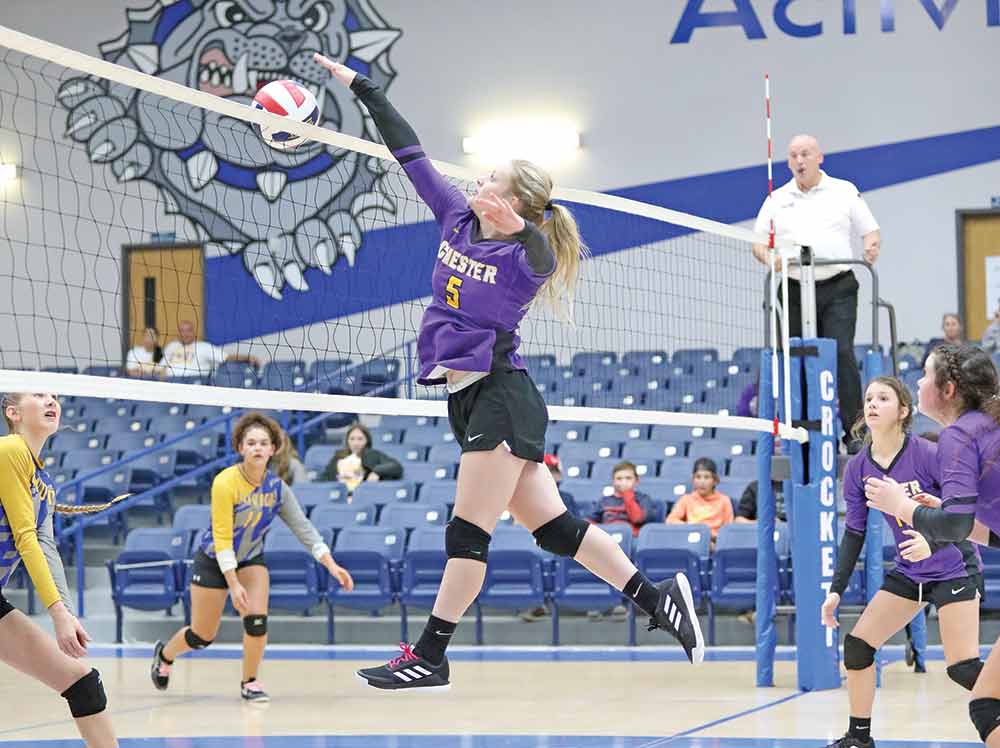 Kat Knox had some incredible saves and Sydney Brock stepped in to have an impressive night as well.  Emma Byrd again led in assists, and Lily Read played through an injury, and hit the ball well.  Emma Grimes, Lily Read, and Bailey Fann led the team in kills.  The Lady Jackets improved to a 21-15 record and move on to the Regional Quarterfinals. The Lady Jackets have now moved up in the top 10 rankings in 1A and are currently ranked 6th in the state.

The Chester Yellowjacket football shut out the Apple Springs Eagles 47-0 in the final football game of the season last Friday, Nov. 5 at Aubry Bradley Stadium.

The Jackets’ offense was on fire against the Eagles all night long. The first drive alone, Carsyn Whitworth had two carries of 18-yards to go with two receptions for 25-yards with the touchdown.  Miles Redwine and Peanut Fann both had fumble recoveries for touchdowns.  Keighen Green had a 75-yard touchdown run.  Colton Pursley and Jackson Knox both also had touchdown runs of over 20-yards in the game.  The Yellowjackets finished out the season with a 3-6 overall record and a third-place finish in district.

The senior class of 2022 was recognized during halftime of the game, as they were escorted onto the field by parents and family members.  The football team voted Emma Grimes as the Football Sweetheart and the cheerleaders voted Ethan Vinson as Mr. Spirit.

The Chester Yellowjacket junior high football team wrapped up their season with a 60-13 victory over the Apple Springs Eagles.  The Jacket defense again scored the first touchdown of the game when Jaxon Gay jumped on a fumble just a minute and a half into the game.  While the starting six were on the field, Apple Springs did not have a positive gain.  Jayse Gay returned the second half kickoff for a touchdown.  Jesse Bittick also returned two kickoffs for touchdowns in the second half.  Emmanuel Jones had an exciting 48-yard run where he reversed the field numerous times.  Henry David finished off the season with a 7-yard touchdown jaunt to put the mercy rule into effect.

Basketball season underway for the high school boys, with the conclusion of football last week.  The boys will have their first game next Tuesday, November 16 as they host the Apple Springs Eagles.

Tip off will be at 7 p.m. in J.P. Johnson Gymnasium in Chester.

The Chester junior high boys and girls will get basketball season started in Colmesneil on Monday, Nov. 15. Games start at 5:30p.m.