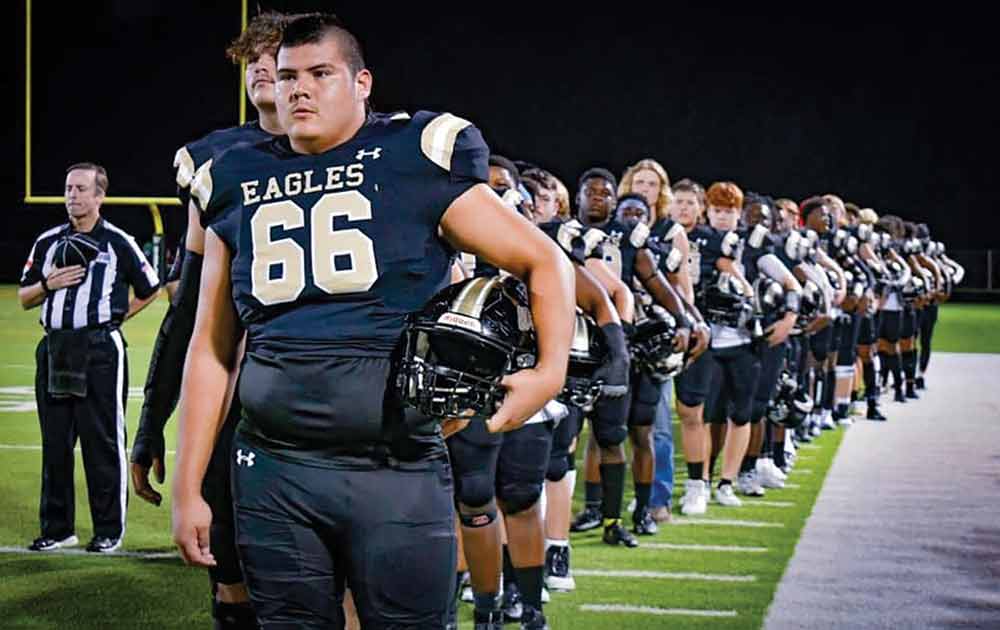 The senior Eagle players stand for the “Star-Spangled Banner” before their game against Anahuac, and prepare to play their last regular-season game of their high school career. (PHOTO COURTESY OF REGINA THOMPSON)

The regular season for high school football is now a thing of the not-so-distant past, but this week signals the beginning of the playoffs.

One Tyler County team has a spot in the bi-district round of the playoffs, the Woodville Eagles. The Eagles will battle the Crockett Bulldogs at 7:30 p.m. on Thursday at Abe Martin Stadium in Lufkin for the District 10-3A Division I bi-district title. The Eagles go into the match with a 6-3 overall record and a 5-1 district record.

The Eagles sustained their one district loss of the regular season last Friday to Anahuac. The 37-31 loss put them in the number two slot for the playoffs.

A field goal from Cole Standley put the Eagles up 3-0 on their first ball, after cutting the Panthers off on their opening drive.

Another Panther turnover in the first quarter led to a touchdown for the Eagles, and posted a score of 10-0, after a good conversion point kick, at the end of that period of play.

In the second quarter, the Panthers tied-up the score, but not before Isaiah Wheaton scored on a one-yard run, with the Eagles up 17-10 at halftime.

A TD from Pop Prejean in the third quarter, on a five-yard run, furthered the Eagles’ lead to 24-10. The fourth quarter belonged to the Panthers, as they tied the score and took their first lead with 8:41 left in the game, 31-24.

Darius Bean scored for the Eagles on a 32-yard pass from Jack Fowler, but ultimately, Anahuac put up another score and the team’s victory.

Both teams ended the night with 5-1 district records. East Chambers, whom the Eagles beat the week before, also sport a 5-1 record going into the playoffs.

Crockett finished third in district and go into Thursday’s game, facing Woodville with a 3-3 record in conference and a 4-6 overall record going into postseason.

Tickets for Thursday’s game in Lufkin are $5 for adults and $3 for students and may be purchased at the gate.