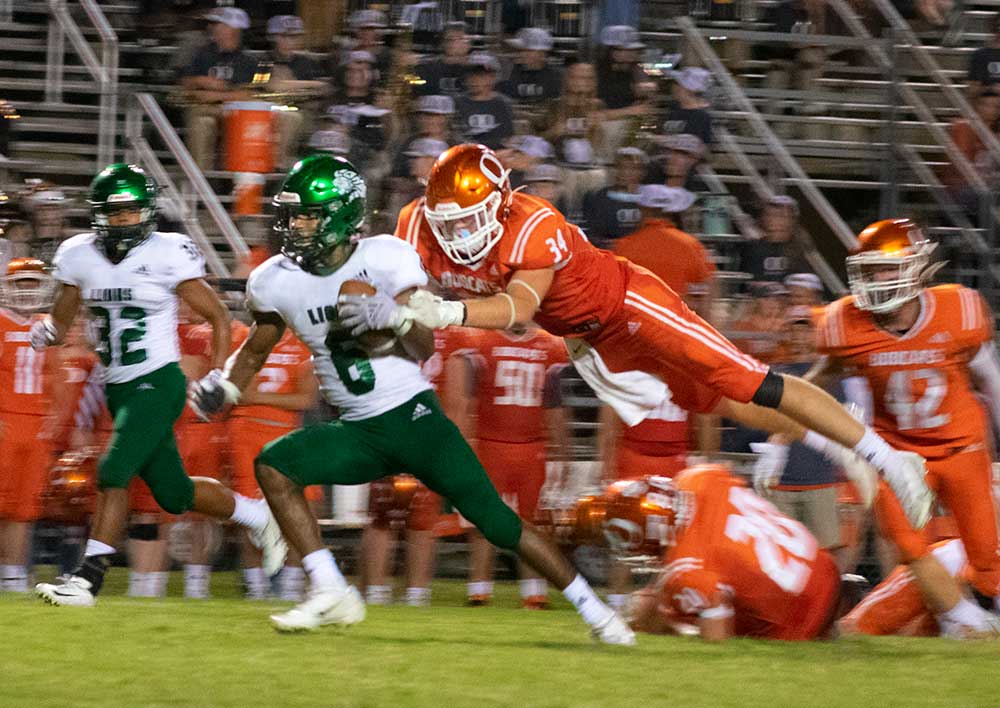 Just as it was last season, the Livingston Lions needed to hang on until the final play to defeat Orangefield, this time 31-27 in the southeast corner of Texas.

The Lions (2-1) were down three points with just over two minutes remaining in the contest. F.L. McClain stadium was still abuzz from a 68-yard Bobcat pass to give Orangefield the 27-24 lead.

On the third play of the final Livingston possession, Jontavian McNeal (10-for-15, 242 yards, TD and 60 yards, TD rushing) found Javean Gardner for 39 yards, putting the ball just inches from the end zone. The junior receiver got separation and made the catch over his head to set the Lions in prime position to take the lead. They would do just that on the next play, as McNeal dove on top of the scrum with two arms holding the football over the goal line. 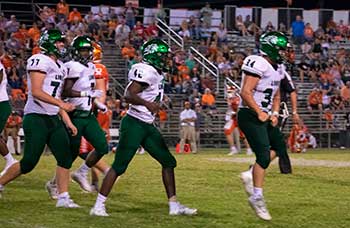 The Livingston defense celebrates the final stop of the game.“I was after him,” McNeal said of his pass to the younger Gardner receiver. “I knew backside shoulder and he had it to make a big play. It feels big. It feels like I had a big part on the field and it feels great.”

The game was McNeal’s first as starting quarterback, as Damian Ruiz is out with an injury.

“I’ve been working at practice and, the starting quarterback, Damian Ruiz, I look up to him and I take after him. When they played back, I knew the hots (hot routes) were open every time. Everybody was coming around to me saying ‘you got it, keep your head up.’ It was a big situation. I’ve got to step up. Coach told me every time I’ve practiced to step up.”

Following the kickoff, the Bobcats (2-1) needed 65 yards for the touchdown in just over a minute of clock, down four. Connor Starr provided a sack and loss of 10 on 3rd down and Jakob St. Martin made the final tackle short of the first down stick on 4th-and-15 as the time hit all zeros.

“We’re back,” Livingston coach Finis Vanover said. “That is the test that we needed right there. It was passionate and we had to grind it out. We had them pinned inside the two down here and they end up with a 98-yard drive and a touchdown. We helped them with a facemask penalty and an offsides and we go to sleep on a pass. The rest of the time, they passionately played. We told them at halftime that we worked our butts off to get back into the lead, but these guys are warriors. They understand what it takes to get hit in the nose and not quit.”

The Lions received a shot of confidence on the opening drive, converting a fake punt, good for 14 yards. It propelled the offense to a touchdown, capped with a 3-yard run by Tank Johnson. 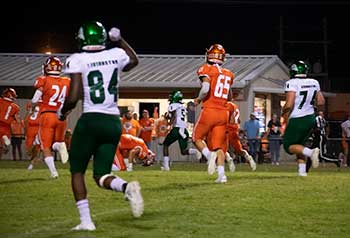 Jontavian McNeal (5) races to the end zone to give Livingston a lead.“That is what this bunch needed,” Vanover said. “They get that spark and they got the motor humming. We got it back and I’m glad they did, because if they don’t, this is a team that will grind you into hamburger.”

Orangefield answered with an eight-play drive of their own, with Cameron Dischler (21-129 yards, 2 TDs) taking the ball in from 10 yards out.

The Lions then put up seven more, as tight end Willie Fagan took a post pattern across the goal line for a 63-yard toss from McNeal.

A facemask penalty bailed the Bobcats out of a 4th-and-long hole from their own 1-yard line, giving them a first down and new life. They took advantage, traveling 91 yards on 14 plays over seven minutes to tie the game.

The Lions were able to work down the field in under a minute and Eric Vazquez booted a 36-yard field goal to give Livingston a three-point advantage at the half, 17-14.

Orangefield began the second half with a long 12-play march of 68 yards, taking nearly six minutes to do so. It would be until midway through the fourth when McNeal and the Lions would go up by four. The elusive quarterback would go in from 30 yards out for a 24-20 advantage.

Both Gardner wideouts, Julian (5-82 yards) and Javean (2-72 yards) had big games. The offensive line rebounded from the week before with a good showing, and the defense had standouts like Julian Gardner, St. Martin, Zaylon Bogany, Willie Fagan, Landon Leggett and Starr that came though when they were needed most.

The Lions continue their extended time on the road next week, traveling to Diboll to take on the Lumberjacks. 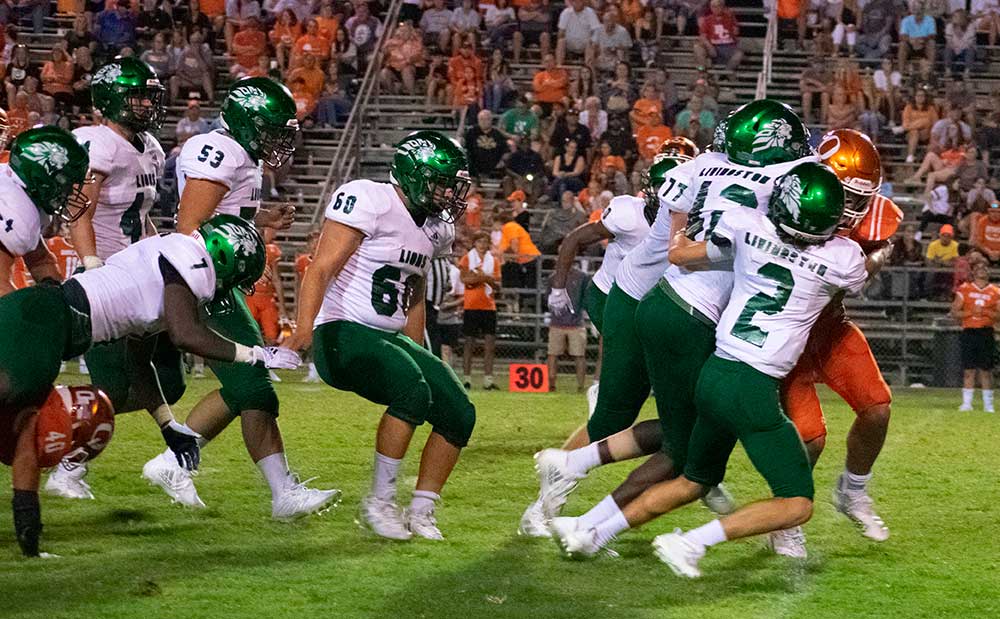